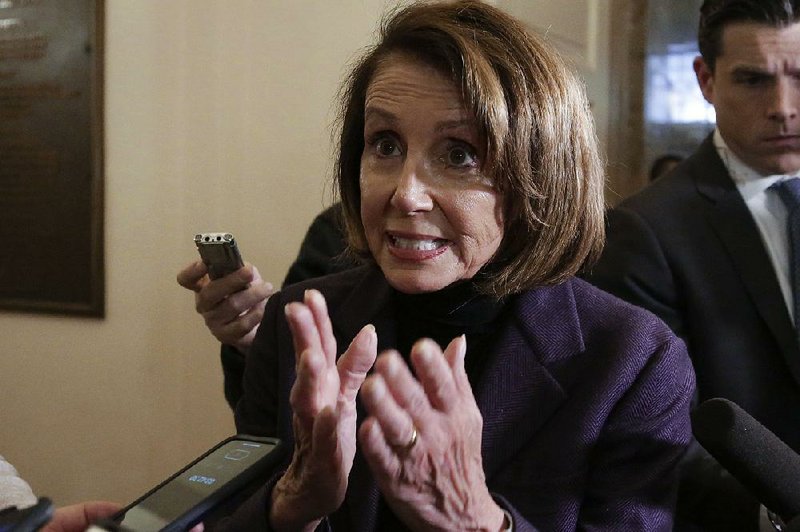 House Speaker Nancy Pelosi said Friday that the release of information on her plans to travel by commercial flight was “very dangerous.”

WASHINGTON -- President Donald Trump said he will make a "major announcement" on the government shutdown and the southern border at 2 p.m. today as the standstill over his border wall continues.

The White House did not immediately provide details on Friday about what the president would be announcing, but a person familiar with the planning said Trump planned to outline a new deal with specific proposals that the administration believes could pave the way for the shutdown's end. The person was not authorized to discuss the announcement and spoke on condition of anonymity.

The move -- on Day 28 of a shutdown that has left hundreds of thousands of federal workers without paychecks -- represents the first major overture by the president since Jan. 8, when he delivered an Oval Office address making the public case for a border wall.

White House spokesman Sarah Huckabee Sanders declined to discuss what Trump might propose but said he was "going to continue looking for the solution" to end what the administration has repeatedly referred to as a "humanitarian and national security crisis at the border."

The Friday evening announcement came after House Speaker Nancy Pelosi canceled her plans to travel by commercial plane to visit U.S. troops in Afghanistan, saying Trump had caused a security risk by talking about the trip. The White House said there was no such leak.

"In light of the grave threats caused by the president's action, the delegation has decided to postpone the trip so as not to further endanger our troops and security personnel, or the other travelers on the flights," Drew Hammill, Pelosi's deputy chief of staff, said in a statement.

Hammill said the State Department's Diplomatic Security Service had raised its threat assessment for the trip overnight after Trump announced in a letter to Pelosi on Thursday that he was revoking her use of a military aircraft to make the journey, which she was to have begun that afternoon. The update indicated "that the president announcing this sensitive travel had significantly increased the danger to the delegation and to the troops, security, and other officials supporting the trip," he said in the statement.

"This morning," he added, "we learned that the administration had leaked the commercial travel plans as well."

People close to Trump, speaking on condition of anonymity without authorization to divulge Pelosi's schedule, revealed late Thursday that she was planning to make the trip anyway, flying commercially. Word of the plan spread through the White House, and among those who had conversations about it was Trump himself.

"You never give advance notice of going into a battle area -- you just never do it," Pelosi said. "Perhaps the president's inexperience didn't have him understand that protocol. The people around him, though, should have known that, because that's very dangerous."

The White House rejected Pelosi's allegation. "The idea we would leak anything that would put the safety and security of any American at risk is an offensive flat-out lie," said spokesman Hogan Gidley, who argued that if the lawmakers had booked flights to Afghanistan, their travel would have been known.

It was the latest turn in a bitter tit for tat between Trump and Pelosi, who requested on Wednesday that Trump postpone his State of the Union address scheduled for Jan. 29 in light of the continuing partial government shutdown, which she said raised security concerns given that federal employees tasked with protecting the attendees were not being paid.

The president struck back the next day, saying that with government workers not receiving their paychecks, he was asking her to delay what he branded a "public relations event."

"Obviously, if you would like to make your trip by flying commercial, that would certainly by your prerogative," Trump wrote in a letter.

But once he had publicized the plans for Pelosi, who is second in line to the presidency, to travel to a war zone, security arrangements for the trip were jeopardized, sending congressional officials scrambling for a way to salvage it.

Trump's letter arrived as lawmakers who were to have accompanied Pelosi were in a bus near the Capitol about to head to Andrews Air Force Base for their departure, and it led to a frenzied round of clandestine contingency planning late Thursday, as the speaker huddled in her office with the lawmakers, aides and security officials hatching a plan to use commercial flights. But given the State Department's heightened warnings and indications that the plans were leaking out, Pelosi decided early Friday to delay the visit altogether.

"Why would Nancy Pelosi leave the Country with other Democrats on a seven day excursion when 800,000 great people are not getting paid," Trump asked in a message on Twitter before Pelosi's office had announced that she was postponing the trip. Pelosi was scheduled to depart late Thursday and return on Tuesday.

Hammill said Pelosi and the other lawmakers scheduled to take the trip, including Rep. Adam Schiff, D-Calif., the chairman of the House Intelligence Committee, and Rep. Eliot Engel, D-N.Y., the chairman of the Foreign Affairs panel, were planning to use the trip to conduct oversight and thank American troops.

"The Congress has a constitutional responsibility to conduct oversight in the war zone where our men and women in uniform are risking their lives every day," he said.

Also Friday, the White House announced a new policy banning all official, taxpayer-funded congressional travel for the duration of the shutdown, unless lawmakers had direct approval from Trump's team.

"Under no circumstances during a government shutdown will any government owned, rented, leased or chartered aircraft support any congressional delegation, without the express written approval of the White House chief of staff," Russell Vought, the acting director of the Office of Management and Budget, wrote in a memo Friday announcing the policy change.

Travel expenses also will not be paid for such trips, the memo said, suggesting that even if lawmakers sought to keep their plans and fly commercial, they would have to pay personally for all costs incurred.

It was the chief of staff, Mick Mulvaney, who presented Trump on Thursday with the option of canceling Pelosi's trip, as he was discussing with the president the fact that if the shutdown continued past Tuesday, there would be another missed payroll for federal workers, according to an official who spoke on condition of anonymity to discuss a private conversation.

The official said that the goal of the move was to keep the key players in Washington to be able to negotiate an end to the shutdown. But Trump walked out of the last negotiating session he called with Pelosi and other congressional leaders, and there are no such talks currently scheduled.

Next week, House Democrats will pass bills to try to fund the government, including one adding $1 billion to border security -- to hire 75 immigration judges and improve infrastructure. The Senate, controlled by Republicans, has declined to consider any bills unless Trump is prepared to sign them into law.

The president and his aides have said he will not budge on his demand for $5.7 billion for a border wall. Democrats have panned the offer and said they will not negotiate until the government reopens.

Separately, a group of 376 Central Americans was arrested in southwest Arizona, the vast majority of them families who dug short, shallow holes under a barrier to cross the border, authorities said Friday.

The group dug under a steel barrier in seven spots about 10 miles east of a border crossing in San Luis and made no effort to elude immigration agents. They included 176 children.

The unusually large group was almost entirely from Guatemala. They were taken to Yuma after entering the country Monday.

The area became a major corridor for illegal crossings in the mid-2000s, prompting President George W. Bush's administration to weld steel plates to a barrier made of steel bollards that had been designed to stop people in vehicles, not on foot, Border Patrol spokesman Jose Garibay said. In those spots, there is no concrete footing to prevent digging.

The group used multiple holes in an apparent effort to get everyone across the border quickly, Garibay said.

Customs and Border Protection released photos and video of a long line of migrants standing patiently on a desert road's dirt shoulder after they were stopped.

The southwest Arizona desert is less remote but arrests have also sharply increased after years of relative quiet. The Border Patrol's Yuma sector made 7,857 arrests in October and November, more than double the same period a year earlier.

Despite a surge in asylum-seeking families from Central America in recent months, border arrests remain low by historical standards.