Building underway at all medical marijuana cultivation sites in Arkansas 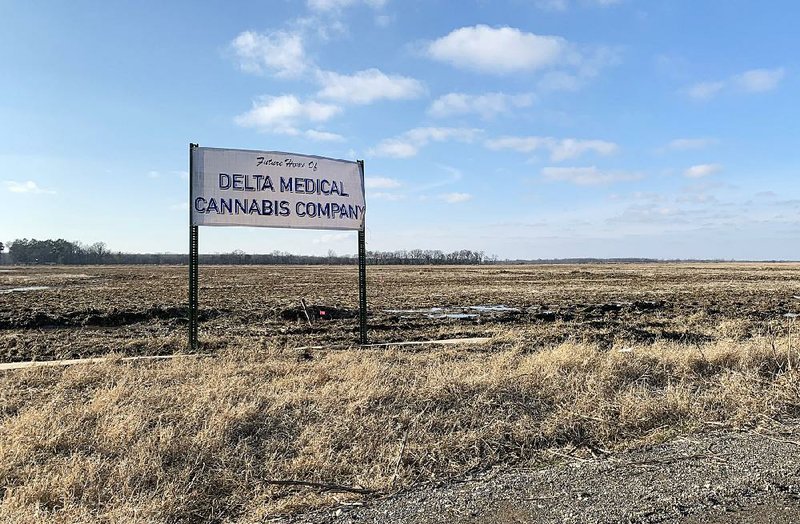 Ground was broken Wednesday at this site for Delta Medical Cannabis Co. of Newport, which sits across the road from a state women’s prison. Construction is expected to take about five months with the first products available about three months after that.

Arkansas’ fifth and final medical marijuana cultivation facility broke ground last week, setting the industry on course to be fully functional before the end of fall.

The other four facilities are in various stages of construction — including one that began growing medical cannabis last week. State regulators believe that cultivators will have mature plants available when the first dispensary opens, likely in April.

Delta Medical Cannabis Co. of Newport broke ground Tuesday in a ceremony that included local officials and members of the community. Delta’s construction had been delayed as the Arkansas Medical Marijuana Commission considered its request to change locations, which was ultimately approved.

Across the road from a state women’s prison, Delta’s dozen or so owners plunged shovels into the ground in front of an excited crowd.

Jon Chadwell, executive director of the Newport Economic Development Commission, acknowledged that some locals had grown frustrated with the slow pace of the industry’s rollout. Court challenges and bureaucratic hurdles have delayed the implementation of Arkansas’ medical cannabis program.

“While we’re frustrated with the slowness, it makes days like today where you see progress that much brighter,” Chadwell said.

Once operational, Arkansas’ medical marijuana program will make the Natural State the 33rd state where the drug is fully implemented for medicinal use. Arkansans voted to legalize medical cannabis in 2016, approving Amendment 98 to the Arkansas Constitution.

The first growing permits were issued in July after a lengthy selection process and a court challenge that stalled the program for nearly four months.

While dispensaries may cultivate a limited number of plants under state law, they must rely upon the five licensed cultivators for most of their plants, particularly in the first weeks after opening. 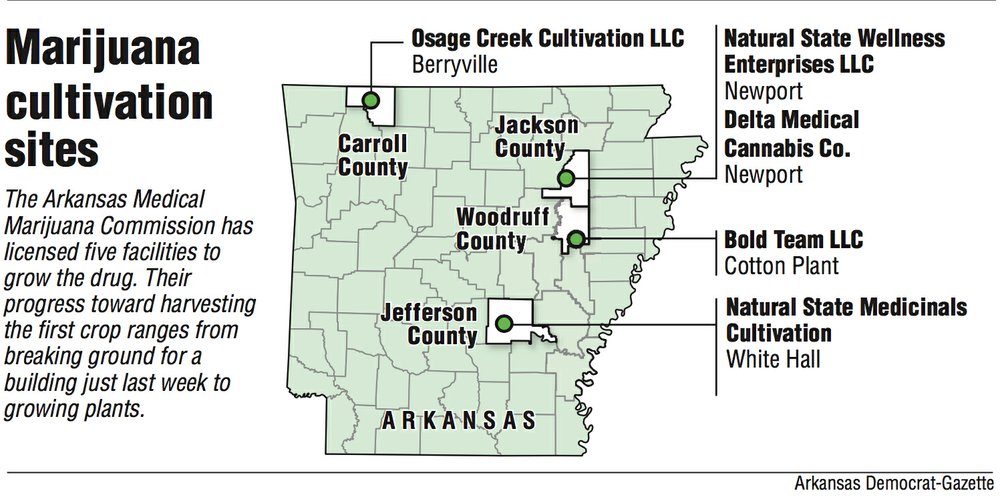 Bold’s facility is at the end of long side street not far from the epicenter of Cotton Plant. A gate and opaque fence hide most of the facility from public view, but the top of the growing facility can be seen from the road.

The company in a statement said it would have cannabis available for dispensaries in April.

“We are honored to begin meeting the medical needs of so many Arkansans at this historic moment in our great state,” the statement said.

Mary Trulove of Osage Creek Cultivation near Berryville said the growing building is finished, but workers are still installing equipment. She said the facility should be ready to begin growing in two or three weeks.

“We are planning to have everything done for the inspection in a couple of weeks,” she said.

Scott Hardin, a spokesman for the state Alcoholic Beverage Control Division, said inspectors plan to visit Osage Creek next month. If the inspection is successful, Hardin said, the company may begin operations.

Officials from Natural State Medicinals Cultivation didn’t respond to requests for comment, but Hardin said the company is making progress in construction.

From the street, a large, beige building can be seen, and interior work appears underway. The building is just off Interstate 530 between Redfield and White Hall.

Joe Courtright, the company’s CEO, told the state Medical Marijuana Commission in November that the company expected to have products available in April.

Company officials told the commission in November that the company had recently broken ground, and earlier this week it appeared that little work had been done since.

Only short orange fencing, a gray construction trailer and a mound of dirt were visible at the company’s site Tuesday.

Ben Kimbro, a spokesman for Natural State Wellness Enterprises’ operator — Arizona-based Harvest — said there has been work done since November.

“We have experienced several weeks of delay recently because of rain,” Kimbro said in a Friday email. “All of the design, engineering and prefabrication of materials is complete. Mobilization is underway and columns were delivered to the site this morning. The construction company is ready to dewater/dry, grade, prep undergrounds, place columns, and place pad and slab. From that point everything will go together very quickly.”

Kimbro said the facility is expected to begin operations in July and have products available in October.

Cannabis will be available about three months after construction is complete, said company President Don Parker.

Newport Mayor David Stewart said he’s also excited because the 35,000-square-foot facility is expected to mean 20-30 well-paying jobs for the city immediately upon opening. Parker said those job numbers could increase depending upon product demand.

As of Friday, the Arkansas Department of Health had approved 6,764 patients for medical marijuana identification cards. The cards allow patients and their registered caregivers to purchase and possess the drug.

“We are working with all our dispensaries and cultivators to speed up the process of licensure and inspection to help them get up and running as soon as possible,” Hamlet said.

Information for this article was contributed by Bill Bowden and Dale Ellis of the Arkansas Democrat-Gazette.