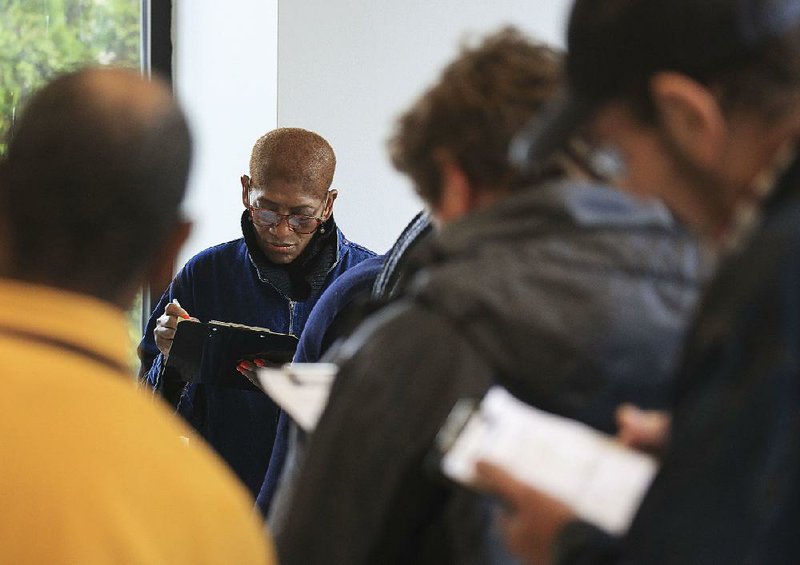 Pulaski County is exploring measures, including a change in law, to improve the voting system after officials did not count 181 absentee ballots in the 2018 general election.

Jason Kennedy, the assistant chief deputy at the Pulaski County circuit/county clerk’s office, is behind a potential state bill that would extend the deadline to accept absentee ballots until 10 days after the election. This would align the requirement with the law for military and overseas voters — who, as long as they postmark their votes by Election Day, have 10 days after voting ends to get their ballots to the clerk.

On Election Day, Nov. 6, employees from the Pulaski County office picked up ballots three times throughout the day from the post office at 600 E. Capitol Ave. in Little Rock. Their last pickup was at approximately 4 p.m., shortly before the office closed, Kennedy said.

State law requires officials to receive ballots until 7:30 p.m. on Election Day, but because post offices close before then, they do not generally receive ballots that late.

On the morning of Nov. 7, U.S. Postal Service officials discovered 181 absentee ballots that came in after 4 p.m. Nov. 6, Kennedy said.

Kennedy said ballots arrived late because of issues with the Postal Service.

“We believe that we should have gotten them,” Kennedy said.

But he added that some voters shipped their ballots too late to count.

“It’s one of those things, you’re really playing with fire if you wait till the last minute to do something,” Kennedy said.

Of the 181 voters, at least 113 mailed their ballots by Saturday, Nov. 3, giving the Postal Service two business days to ship the votes. The Postal Service asks patrons to allow up to three business days for first-class mail delivery. However, of the 113 voters, 76 mailed their votes from Pulaski County. More than 50 of the ballots did not include a date when they were mailed. 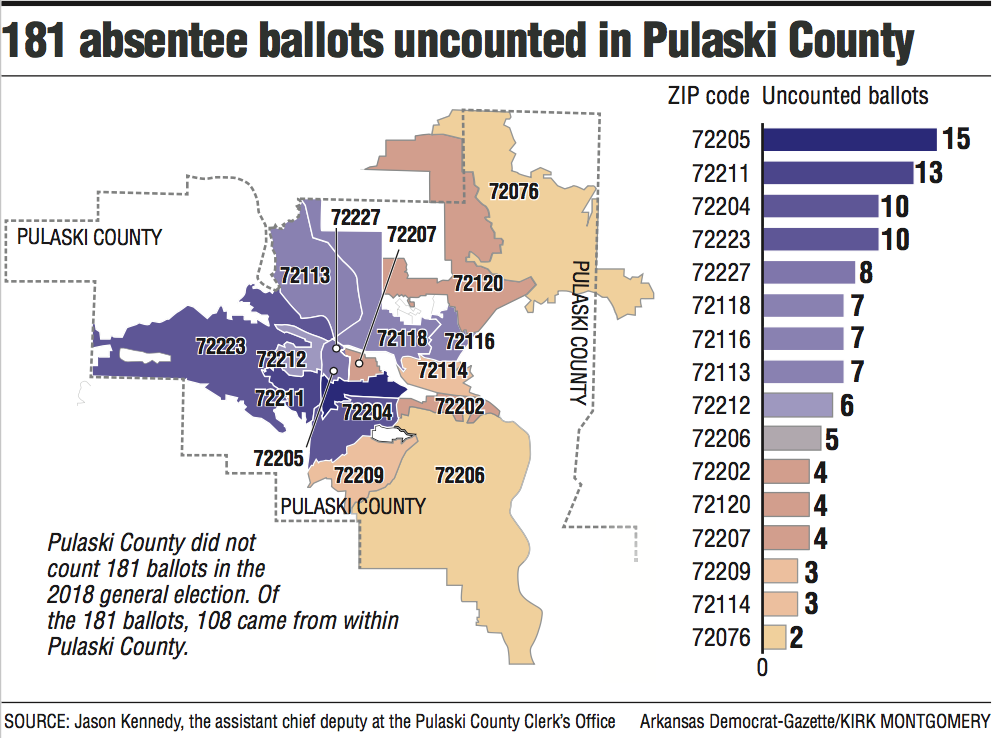 The Postal Service refused to allow the Arkansas Democrat-Gazette to interview any employee involved with the late ballots and denied that its actions in any way affected the arrival of the absentee ballots.

“We have thoroughly reviewed our process for the past election season, and concluded that there were no significant issues related to election mail, including ballots,” said Becky Hernandez, the Postal Service’s acting strategic communications specialist in its San Antonio office.

When the Democrat-Gazette sent follow-up questions regarding the statement, Hernandez said the Postal Service had no further comments.

Despite the statement, Kennedy said that he met with Kathy McAlister, a supervisor with the Postal Service, to remedy the situation. They met between the general election on Nov. 6 and the runoff on Dec. 4.

Because of the meeting, the county is considering altering its absentee ballot envelopes to make them more recognizable and easier for postal workers to sort. Kennedy originally said he wanted to send ballots in envelopes that were bright colors, but the county’s envelope vendor reported that this would be expensive. Kennedy now plans to mail incoming votes in envelopes with horizontal, highlighter-yellow stripes and outgoing votes in envelopes with horizontal, highlighter-blue stripes.

“It’s basically to make it stand out from the other envelopes,” Kennedy said.

“We’re planning on working together with the Postal Service to make easier for our voters to vote,” Kennedy said.

Absentee voting is designed for people who are unable to reach the polls. Sometimes, this is because of disability or illness.

Shelley Grunden, who was one of 181 absentee voters whose votes didn’t count, is homebound and unable to vote at a polling center.

“I think it was sufficient time to get it in,” Grunden said about mailing her vote on Nov. 3.

Gloria Thomas and Shirley Moore’s votes also were among the 181 absentee ballots not added to the election results. Thomas mailed her ballot on Nov. 3, and Moore mailed hers on Nov. 2.

All of the women live in Pulaski County. The circuit/ county clerk’s office did not alert any of them that their votes were received too late.

“I guess next time I’ll just have to get it in earlier, but that does upset me,” Grunden said.

Norel McAdoo attends Tennessee State University in Nashville but votes in Pulaski County, where his family still lives. Norel McAdoo didn’t realize his vote was not counted until he tried to request an absentee ballot to vote in the runoff, his mother Stacey McAdoo said.

“As a citizen, as a mother, you try to get your children to participate, to be an active citizen of society,” Stacey McAdoo said. “You tell them the importance of voting, that your vote counts, all of these things, and it wasn’t.”

The McAdoos said the experience made them question the voting process.

“And the thing that they tell you to trust the system, and it just brings more doubt, apathy, confusion when the system doesn’t work like it’s supposed to or like you assume it would, and then there’s no checks and balance,” said Leron McAdoo, Norel McAdoo’s father. “You can never at some date say ‘did my vote count?’”

The McAdoos compared the voting issues in Pulaski County to the election problems experienced around the nation. They think the voting process needs to improve to work better for people like their son.

Newly elected Pulaski County Clerk Terri Hollingsworth said she hopes to expand voter education in the county, making it easier for people to vote. She said she wants to include the absentee ballot process in any education efforts.