Hundreds of food inspectors in state work without pay amid shutdown 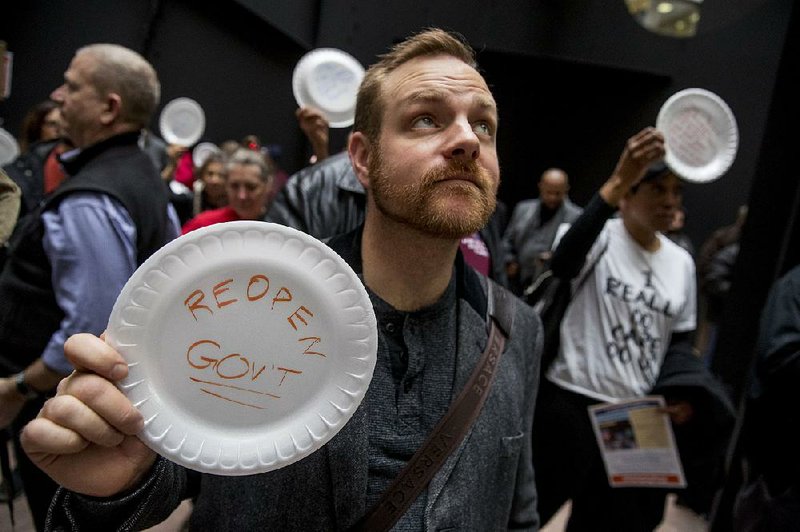 Furloughed federal workers hold a silent protest Wednesday on Capitol Hill. To convey their message and avoid being arrested, they used disposable plates instead of posters.

Rhonda Hulse, a meat and poultry inspector in Springdale, is one of the many federal employees in the state who has not been paid since the partial government shutdown started Dec. 22, yet she continues to clock in for a full day's work.

Unlike furloughed federal employees, Hulse is considered an essential worker by the U.S. Department of Agriculture and is counted in a group that includes flight security officials who screen airline passengers; prison workers; and food inspectors who ensure that meat, poultry and egg products are safe to eat. But as the government shutdown hits day 34, expenses like food, gasoline and rent continue to pile up for Hulse and the hundreds of food inspectors in Arkansas who are required to work.

"Many of us are making hard choices and hard decisions such as whether to buy groceries or pay for our medicine," she said. "Do we pay for child care or put gas in our vehicle?"

Hulse is a consumer safety inspector and local officer of the American Federation of Government Employees, one of the largest federal employee unions. There are 3,483 members in Arkansas who work for various federal agencies.

"It's going to be hard if this shutdown goes on for much longer," said Jud Hanson of Fayetteville. He works as a federal relief inspector, which means his hours and locations vary from week to week. Most inspectors work about 40 hours a week with little overtime. Those who work overtime during the partial shutdown receive immediate payment for those hours, but the net amount could be under $100.

"I'm fortunate that I work overtime," Hanson said. "But the vast majority are not in the same position I'm in. I have enough savings to carry over another month or two. But if this goes on into the summer, God forbid, I will be hurting as well.

"I wish the folks in D.C. would get their act together."

Arkansas, one of the leading U.S. poultry producers, has 90 meat, poultry and egg facilities that require a federal inspection staff. Tyson Foods, Butterball, Simmons Foods and Peco Foods are a few of the companies with operations scattered around the state, mostly in rural areas and Northwest Arkansas.

In a tweet Tuesday, Agriculture Secretary Sonny Perdue thanked the agency's meat and poultry inspectors who are required to work during the partial shutdown, who "answered the call to keep protecting our protein."

Comments attached to his Twitter message were mixed, but mostly negative, with critics suggesting ways to pay exempted federal workers.

"From what I've heard, I don't think there's been a major staffing issue," Hanson said when asked about food safety and quality concerns during the partial shutdown. "I wouldn't worry about the safety of the food supply because the plants are still going to do whatever they can."

A spokesman for the USDA said more than 6,000 food inspectors work in plants and facilities across the nation. She did not disclose state-specific numbers, citing a staff shortage.

Arkansas inspectors estimated that hundreds of meat, poultry and egg inspectors are working without pay. Hulse said there are more than 600 food or consumer safety inspectors in the state. Hanson, who's worked as an inspector for more than 20 years, guessed maybe 1,000.

Hulse said some meat, poultry and egg inspectors in Arkansas earn a base pay of $28,900 and work eight to 12 hours a day, five to seven days a week.

According to the agency's website, inspectors typically work in noisy, industrial spaces with large moving machinery. Extreme temperatures are common, and workstations and walkways can be narrow and slippery.

Travis Justice, chief economist of the Arkansas Farm Bureau, knows the partial shutdown is an inconvenience, but said the role of the inspector is vital to a processor's operation.

Efforts by lawmakers to reopen the federal government have been unsuccessful, pressuring federal agencies to order furloughed employees back to work. More than 9,700 unpaid employees are scheduled to be back at USDA offices today to help farmers and ranchers secure loans.

In the past 10 days, Hulse said officers in her union have given $50 Walmart gift cards to almost 50 union members in the area, excluding non-union federal employees.

A group of restaurants in central Arkansas has also been providing meals for the 110 U.S. Transportation Security Administration screeners at Bill and Hillary Clinton National Airport/Adams Field. Another 100 screeners at airports in Northwest Arkansas, Fort Smith and Texarkana also are working without pay during the shutdown.

Contrary to what some believe, Hudson said "this is not a paid vacation."

He remembered the 2013 shutdown, which lasted over two weeks and is the third-longest recorded.

"Now this is going on," he said. "I think it's a bit unfair to say you knew this would happen when you signed on. I've never expected this kind of thing."

Earlier this month, Hanson wrote to Republican Sens. Tom Cotton and John Boozman on the issue, and both responded.

"As taxpayers, Arkansans deserve access to the federal programs that they depend on, and federal employees should not be worried if they will be able to pay their bills on time," Boozman said in his letter.

Print Headline: Hundreds of food inspectors in state work without pay amid shutdown