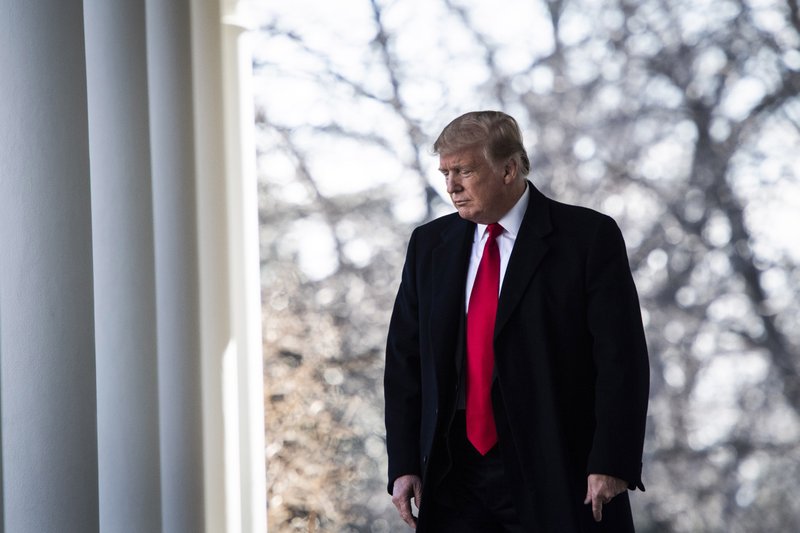 President Donald Trump walks out to the Rose Garden at the White House to announce a deal with congressional leaders to temporarily reopen the government on Jan. 25, 2019. Washington Post photo by Jabin Botsford.

WASHINGTON -- President Donald Trump lashed out at U.S. intelligence officials Wednesday, calling them "extremely passive and naive" about the "dangers of Iran" and pushing back on their assessments of the Islamic State and North Korea.

In tweets, Trump offered what amounted to a rebuttal of testimony on global threats provided at a Senate committee hearing Tuesday by a panel of top officials from his administration.

Trump was most pointed in his pushback on the assessment of Iran. During testimony, officials said that Iran was not trying to build a nuclear weapon and was in compliance with an agreement forged during President Barack Obama's administration, from which Trump subsequently withdrew the United States.

"The Intelligence people seem to be extremely passive and naive when it comes to the dangers of Iran. They are wrong!" Trump wrote. "They are testing Rockets (last week) and more, and are coming very close to the edge. There [sic] economy is now crashing, which is the only thing holding them back. Be careful of Iran."

Trump added: "Perhaps Intelligence should go back to school!"

Trump wrote that when he became president, the Islamic State "was out of control in Syria & running rampant."

"Since then tremendous progress made, especially over last 5 weeks," Trump wrote. "Caliphate will soon be destroyed, unthinkable two years ago."

Tuesday's testimony was linked to the release of the annual "Worldwide Threat Assessment," a report to Congress that ranks threats to U.S. national security from around the world and provides the public with an unclassified and up-to-date summary of the most pressing threats.

During the Senate hearing, officials warned that the Islamic State was capable of attacking the United States and painted a picture of a still-formidable terrorist organization.

Trump announced in December a plan to withdraw U.S. troops from Syria after concluding that "we have won" against the Islamic State. Prominent members of his own party have denounced what Sen. Mitch McConnell of Kentucky, the majority leader, on Tuesday called "a precipitous withdrawal" of U.S. troops from Syria and Afghanistan.

Director of National Intelligence Daniel Coats noted that the terrorist group has suffered "significant leadership and territorial losses." But it still commands thousands of fighters in Iraq and Syria, he said, and maintains eight branches, has more than a dozen networks and attracts thousands of supporters around the world.

Coats was joined on the panel by CIA Director Gina Haspel, FBI Director Christopher Wray and several other administration officials.

In his tweets, Trump also sought to defend progress on North Korea ahead of a planned second summit next month with North Korean leader Kim Jong Un.

During Tuesday's hearing, Coats said that North Korea was "unlikely to completely give up its nuclear weapons and production capabilities," which the country's leaders consider "critical to the regime's survival."

"North Korea relationship is best it has ever been with U.S.," Trump wrote Wednesday. "No testing, getting remains, hostages returned. Decent chance of Denuclearization."

"Time will tell what will happen with North Korea, but at the end of the previous administration, relationship was horrendous and very bad things were about to happen. Now a whole different story," Trump added, noting that he was looking forward to the summit with Kim.

Trump's assessment Wednesday on North Korea was tempered compared with his initial claims after the first summit in June.

In tweets upon returning from that meeting, Trump declared America's "biggest and most dangerous problem" all but resolved. The deal he struck with Kim, he said, meant that there was "no longer a Nuclear Threat from North Korea" and that "everybody can now feel much safer."

The first summit ended with a vague agreement that contained few concrete goals and deadlines.

"It is a credit to our intelligence agencies that they continue to provide rigorous and realistic analyses of the threats we face," Rep. Adam Schiff, D-Calif., chairman of the House Intelligence Committee, said in a statement. "It's deeply dangerous that the White House isn't listening."

"The President has a dangerous habit of undermining the intelligence community to fit his alternate reality," Warner said in a tweet. "People risk their lives for the intelligence he just tosses aside on Twitter."

Rep. Mike Gallagher, R-Wis., defended the intelligence agencies Wednesday, saying, "They are doing a very difficult job and they are actually trying to advance the president's priorities."

While his top intelligence officials warned about Russia's continuing efforts to conduct influence operations in the U.S., Trump continued to dismiss any notion that Russia had interfered in American elections.

Douglas Wise, a career CIA official and former top deputy at the Defense Intelligence Agency, said Trump's criticism of the intelligence chiefs threatened to corrupt the process. Intelligence officers do not like to be at odds with the president, he said, and Trump's comments put them in an uncomfortable position.

"This is a consequence of narcissism, but it is a strong and inappropriate public political pressure to get the intelligence community leadership aligned with his political goals," Wise said. "The existential danger to the nation is when the policymaker corrupts the role of the intelligence agencies, which is to provide unbiased and apolitical intelligence to inform policy."

Information for this article was contributed by John Wagner and Shane Harris of The Washington Post; by Eileen Sullivan of The New York Times; and by staff members of The Associated Press.