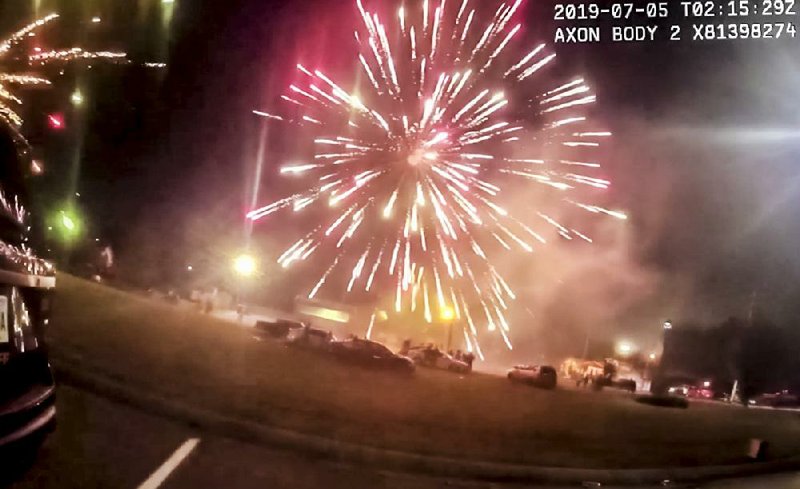 At least five people had fingers or parts of their hands blown off on Independence Day in what the Pulaski County sheriff's office called a "fireworks war" in College Station.

The crowd near 3M Road and Frazier Pike -- which Burk estimated to be 250 to 300 people -- were not all residents of the area, Burk said. The majority were from Little Rock, North Little Rock and other surrounding communities.

"That area has a history of fireworks complaints, so we had a few deputies over there," Burk said. "It started about 6 [p.m.], and we were out there until well into the morning."

The crowd shot so many fireworks at ambulances that the first responders could no longer drive into the area, Burk said, which meant deputies had to transport people with missing fingers three or four blocks before they could be seen by a medic.

Body camera footage from deputies on 3M Road late Thursday shows an almost constant barrage of fireworks shooting small balls of fire around the street and park while people scream in the background.

"It sounded like a war zone," said Annette McClain, who lives near 3M Road. "It was just ridiculous, but it was really scary."

McClain said she returned home from her son's house around 6 p.m. Thursday to find sheriff's deputies and a crowd of people near her house. A large patch of grass near the railroad tracks that cross 3M Road was scorched.

"I said, 'that wasn't like that when I left,'" McClain said. "An officer told me it caught on fire, and they had to put it out."

When McClain stepped out of her car and walked toward her home, she said a firework whizzed by, nearly hitting her.

"It didn't hit me, but it landed in my yard," she said. "Thank God it had sprinkled just a bit before. I was scared my house would catch on fire."

McClain said at first people were shooting back and forth across the railroad tracks, but the groups split up and began fighting and firing the explosives all over the neighborhood. McClain said deputies were stopping and arresting people who fired into crowds or at other people, but "there was only so much they could do. They were on their jobs, I'll tell you that. They were out here all night."

McClain, who has lived in her 3M Road home for more than 20 years, said there have been fireworks fights in the past but never one so violent or with so many people.

"I pulled a stool up to my door and watched for a while, but I wasn't going out there," she said.

Tyrese Taylor and Rashad Scaife, who said they participated in the fireworks fight Thursday night, said the event was planned to be in a secluded area and away from houses, but things got out of hand. Taylor said the fight happens almost every year with bottle rockets or smaller incendiaries, but this year attendees had bigger ammunition.

"We were out here all day, but war started at 6," Taylor said. "Everybody was lined up and everybody knew who they were shooting at, but when the police showed up it was like stepping on an ant bed. People went everywhere."

"I saw three people get hurt," Scaife said. "This one guy, his whole hand was off."

One deputy reported seeing a man with the majority of his right palm blown off, Burk said. Other people lost one or more fingers. Arrest reports said those who were arrested either shot their fireworks into a crowd or toward sheriff's deputies.

"Oh, I saw them shooting them at police," McClain said. "I've never seen anything like it before."

Fireworks are legal to possess and shoot in Pulaski County, but Burk said residents aren't allowed to recklessly deploy the explosives or use them to injure others.

CORRECTION: A previous version of a photo caption in this story gave an incorrect date for body camera footage of a fireworks explosion. The still was taken from footage recorded Friday morning.