In a nutshell, researchers counting turtles in Delta 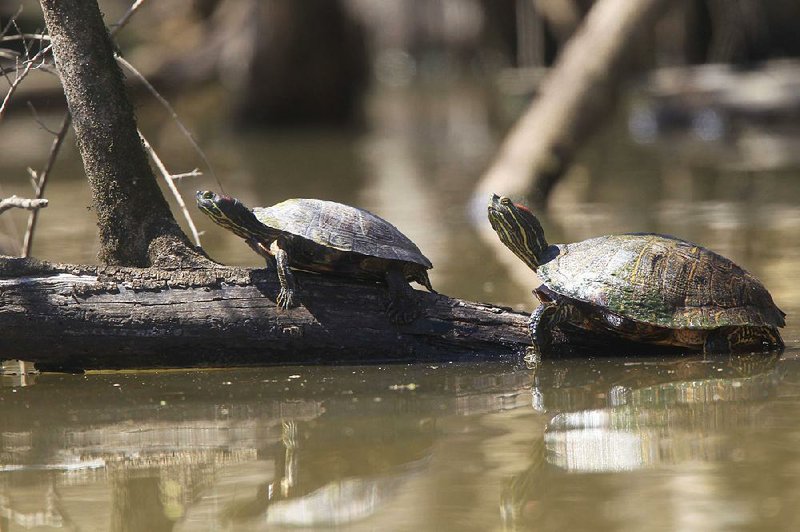 A red-eared slider stands on a log at a reservoir in the White River wildlife refuge. From 2004-17, more than 1.3 million turtles were commercially harvested in Arkansas, most of them red-eared sliders.

The Arkansas Delta is crawling with red-eared sliders, stinkpots and river cooters.

The Arkansas Game and Fish Commission wants to make sure it stays that way.

The commission has funded a three-year study to count aquatic turtles in the Mississippi River Delta. It began in May with researchers trapping, marking and releasing turtles.

They've been catching about 100 a day, said Brett DeGregorio, leader of the Fish and Wildlife Cooperative Research unit of the U.S. Geological Survey. He's a federal employee based at the University of Arkansas, Fayetteville.

Researchers notch the turtles' shells so they can be identified if re-caught.

"Depending on our site, we're getting between 10% and 30% recaptures," DeGregorio said. "That's what we were hoping for, because if you don't get around there you can't make the equations work. We're getting exactly the data we were hoping to get, so we're going to have some really good answers at the end of this study."

DeGregorio said the count will provide the Game and Fish Commission with scientific data so it can make an informed decision about whether to restrict the harvest of turtles in Arkansas. He said every state connected to Arkansas, except for Louisiana, puts a limit on the number of turtles that can be commercially harvested.

"When regulated properly, turtle harvest poses little threat to overall turtle populations," said Ben Batten, chief of fisheries for the commission. "We have good records about commercial turtle harvest through our annual reporting system, but we also need to ensure the overall population is in good condition to continue the use and conservation of this renewable resource."

Of Arkansas' 16 native turtle species, 11 aquatic species are commercially harvested, according to a report from Kelly J. Irwin, herpetologist for the commission. DeGregorio's group is monitoring the populations of 10 of those species.

From 2004-17, more than 1.3 million turtles were commercially harvested in Arkansas, based on reports submitted to the Game and Fish Commission. Ninety-five percent of those turtles came from the Delta. Four counties in northeast Arkansas -- Mississippi, Greene, Craighead and Poinsett -- accounted for 42% of the total harvest.

Although some Arkansas turtles are exported for the pet trade, "the majority of harvest is focused on large size class sliders, snappers and softshells for food turtles for overseas markets," according to Irwin's report.

The Asian market, especially China, has been the biggest driver in the demand for aquatic turtles as food because the majority of Asian turtle species are threatened with extinction, wrote Irwin. But the market demand has decreased in recent years because of increased production of turtles by Chinese turtle farms.

In Arkansas, 2004 was the first year for voluntary reporting of the commercial turtle harvest. Two years later, the commission passed a regulation requiring harvest reports.

DeGregorio's group got a $107,963 grant from the Game and Fish Commission to do the population count of turtles in the Arkansas Delta. UA will provide $97,243 in matching funds, according to the commission.

Massey and Lassiter have been doing the trapping. They set hoop traps, baited with chicken and fish.

"They're out there every day," DeGregorio said. "These traps do have to be checked every 24 hours. That's the law."

Researchers don't want to injure the turtles, he said.

"These water levels change every day so we want to make sure no turtles drown," he said.

Most of the trapping will occur during the turtles' "active season," which is April through June, this year and next.

Massey couldn't be reached for comment, but when she got the gig in April she posted on Facebook: "I am beyond excited to announce that I am getting my masters degree at the University of Arkansas, Fayetteville! I am overjoyed! It's a fully funded project working with freshwater turtles in the Arkansas Delta ecoregion. I'll be studying their population demographics and the effects of harvest with the hopes of promoting management and harvest regulations on a state level. I'm so excited, this is right up my alley, exactly what I want to do!"

A turtle count like this has never been done in the Delta, DeGregorio said.

"We know the Delta has a great number of turtles," he said. "They seem to be very dense."

Researchers are focusing on agricultural ditches and fish farms, said DeGregorio. The ditches are loaded with turtles and easily accessible because they're on farms and along roads, he said.

He said spiny softshell turtles really do have soft shells.

Common snapping turtles and softshells can grow to weigh about 40 pounds, DeGregorio said.

While turtle harvesting has been restricted in some parts of Arkansas, "the Delta is still relatively open to commercial harvest," said DeGregorio.

There's a lot of water in the Delta, it's the right temperature, and there's plenty of food for turtles, he said.

DeGregorio said they will study the turtle population in places where commercial fishermen can go and where they can't. That includes wildlife management areas where turtle harvesting is restricted.

Turtles normally live for many years and don't reproduce until they're around 10 years old, DeGregorio said. For that reason, some states have restricted the harvesting of older turtles but not younger turtles.

"Most states that enact regulation adopt size limits such that only larger individuals can be harvested, although some states have done the opposite and only allow the harvest of individuals below a certain size," DeGregorio wrote for the UA's "Research Frontiers" newsletter at researchfrontiers.uark.edu. 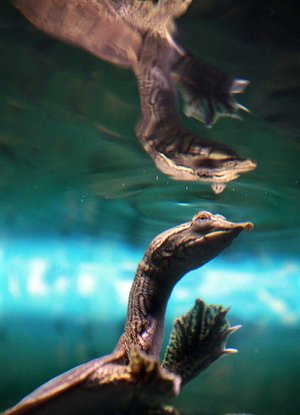 Photo by Democrat-Gazette file photo
A spiny softshell turtle swims in an aquarium at the Little Rock Zoo. Its cousins in the Mississippi River Delta are part of a three-year Arkansas Game and Fish Commission study to determine whether the state should restrict commercial turtle harvesting. 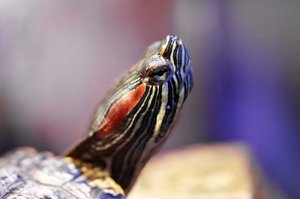 Print Headline: In a nutshell, researchers counting turtles in Delta