New agency team to push for query by Compiled by Democrat-Gazette staff from wire reports | July 9, 2019 at 7:08 a.m. 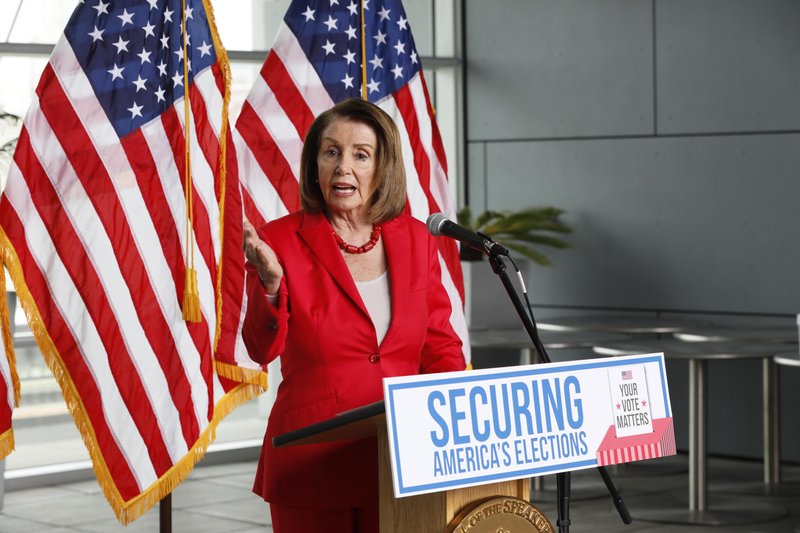 House Speaker Nancy Pelosi speaks during a news conference at the Federal Building in San Francisco on Monday, July 8, 2019. She and other elected leaders and advocates, called for the Senate to pass the Securing America's Elections (SAFE) Act, a bill to protect elections from future foreign interference. House Speaker Pelosi said President Donald Trump wants to add a citizenship question to next year's Census because he wants to &quot;make America white again.&quot; (AP Photo/Samantha Maldonado)

EDGEFIELD, S.C. -- Attorney General William Barr said Monday that he sees a way to add a citizenship question to the 2020 census despite a Supreme Court ruling that blocked it.

Barr would not detail the plan that he believes will include the question in the census, though he told The Associated Press that President Donald Trump's administration will take action in the coming days. A senior official said Trump is expected to issue a memorandum to the Commerce Department instructing it to include the citizenship question.

The Supreme Court recently blocked the question, at least temporarily, saying the administration's justification for adding it "seems to have been contrived." That was a blow to Trump, who has been pressing for the government to demand information about citizenship.

The U.S. Census Bureau's experts have said that requiring such information would discourage immigrants from participating in the survey and result in a less accurate count. That in turn would redistribute money and political power away from Democratic-led cities where immigrants tend to cluster, shifting it to whiter, rural areas where Republicans do well.

House Speaker Nancy Pelosi, a California Democrat, said on Monday that Republicans want to demand citizenship information so that "just their people vote and not the general population," adding that the president wants to "make America white again."

Meanwhile, the Justice Department is replacing the legal team that has been pursuing Trump's efforts, putting in place a new team consisting of both career and politically appointed attorneys.

James Burnham, a top lawyer in the department's civil division who had been leading the team, had told Barr that a number of people who had been litigating the case preferred "not to continue during this new phase," the attorney general said. Barr said Burnham "indicated it was a logical breaking point since a new decision would be made."

The attorney general said he didn't have further details on why the previous attorneys didn't want to continue, but "as far as I know, they don't think we are legally wrong."

"If they prefer not to embark on this next phase, then I thought it could make sense to change," Barr said.

Analysts said the change in legal teams is all but unprecedented in such a high-profile case.

"There is no reason they would be taken off that case unless they saw what was coming down the road and said, 'I won't sign my name to that,'" Justin Levitt, a former senior official in the Justice Department under President Barack Obama, said Sunday.

But Kerri Kupec, a department spokesman, cast the change in a positive light, saying in a statement that the lawyers had "given countless hours to defending the Commerce Department and have consistently demonstrated the highest professionalism, integrity and skill inside and outside the courtroom."

According to a Justice Department lawyer who spoke on the condition of anonymity for fear of retaliation, no lawyers from the department's Federal Programs branch -- which customarily defends the administration's policies in court -- would be working on the census issue. A senior official confirmed that Federal Programs was being taken off the case.

Barr said he has been in regular contact with Trump over the issue of the citizenship question.

"I agree with him that the Supreme Court decision was wrong," the attorney general said. He said the president believes there is "an opportunity potentially to cure the lack of clarity that was the problem, and we might as well take a shot at doing that."

The Trump administration has argued that it wanted the question included to aid in enforcing the Voting Rights Act, which protects minority groups' access to the ballot box.

The Supreme Court decision was openly skeptical about that justification. Chief Justice John Roberts joined the court's four more liberal members in the ruling, which suggested that the question still could be asked if the Justice Department presented a more plausible rationale.

The department, however, abandoned its efforts after the ruling, telling a federal judge that the battle was over "for once and for all."

But Trump later said on Twitter that the Justice Department statements were "fake," suggesting that the head count could be delayed until he found a way to add the citizenship question, perhaps by printing an addendum that could be tacked onto the questionnaire.

On Wednesday, Justice Department lawyers returned to a Maryland court that was hearing a case against the question, and they recanted their admission of defeat. Joshua Gardner, a lawyer working on the census issue, and other department officials told U.S. District Judge George Hazel and a second judge in Manhattan overseeing another census lawsuit that the search for a way to place the question on the census would continue.

Lawyers for opponents of the question pounced on that declaration Friday, arguing that the Justice Department had insisted repeatedly -- including to the Supreme Court -- that it was essential to wrap up the dispute by June 30, lest the census be delayed for lack of time to print questionnaires and other forms.

The Supreme Court relied on that deadline, the plaintiffs noted, in leapfrogging the legal appeals process to take the case directly from a lower federal court to a hearing before the justices. The plaintiffs argued that because the Justice Department lost the legal battle, they dismissed their previously stated deadline and said there is still time to consider adding the question.

The government's "'heads I win, tails we'll see' approach undermines confidence in both their ability to conduct the 2020 census and public confidence in the rule of law," the plaintiffs argued.

It's unclear what new rationale for asking the question the administration might include in a presidential memorandum. Trump on Friday did not specifically cite the Voting Rights Act in defending the need for the question: "You need it for Congress, for districting. How many people are there? Are they citizens? Are they not citizens? You need it for many reasons."

Information for this article was contributed by Mike Balsamo, Zeke Miller and Alan Fram of The Associated Press; and by Michael Wines, Katie Benner and Adam Liptak of The New York Times.