Thousands of jobs being cut worldwide as part of overhaul by COMPILED BY DEMOCRAT-GAZETTE STAFF WIRE REPORTS | July 9, 2019 at 1:46 a.m. 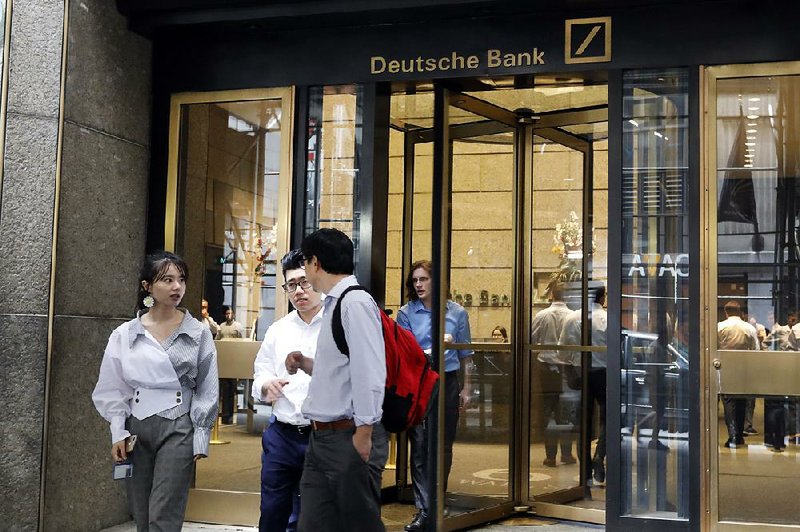 Deutsche Bank began firing thousands of employees in Asia, Europe and the United States on Monday, moving quickly on at least one part of a strategy meant to arrest years of losses, scandal and decline.

The job cuts, coming hours after the bank announced a "radical" turnaround plan, were a show of decisiveness at the expense of workers and a tacit answer to the question most asked by analysts and investors Monday: Deutsche Bank's plan looks good on paper, but can managers pull it off?

Christian Sewing, Deutsche Bank's chief executive, acknowledged Monday that the bank had failed in the past to follow through on promises to change. As a result, the bank lost money in four of the past five years and will probably report a loss for 2019.

"Some may say you have heard this before," Sewing said during a conference call with journalists. "It is different this time."

Investors appeared unconvinced. Deutsche Bank shares opened higher in trading in Frankfurt, but then gave up the gains and closed down 6% in New York.

Many elements of the bank's turnaround plan will take months or even years to put in place, including an effort to sequester high-risk assets in a separate unit where they will be sold or retired.

But cutting jobs can be done quickly, at least in countries like the United States and Britain where there are few legal obstacles. So employees felt the most immediate impact of the bank's plan to reverse its fortunes, leading to scenes outside Deutsche Bank offices that recalled those that unfolded during the financial-sector layoffs after the investment bank Lehman Brothers collapsed in 2008.

Although Sewing declined Monday to detail how the cuts, which will ultimately total 18,000 worldwide, would be distributed, they are most likely to be concentrated in New York and London, and in places like Singapore where Deutsche Bank has large investment-banking operations.

Layoff announcements were made to at least two groups at the bank's U.S. headquarters in lower Manhattan. Employees on their way into the building described an office that had been dominated by a sense of foreboding. About 10 a.m., a group of employees emerged carrying white envelopes containing information about the dismissals. One woman appeared to be crying.

An employee who declined to be identified said workers had received emails Sunday telling them what time to come in for the announcements. Human resources personnel thanked the employees for their service and said that deciding to make the layoffs had been difficult for the bank, the employee said.

Deutsche Bank plans to eliminate its equity sales and trading division, a unit of the investment-banking division that generated nearly $2.2 billion in revenue last year.

Sewing insisted that Deutsche Bank is not abandoning investment banking, just the businesses that are not profitable. And he said the United States would "remain a core market."

Deutsche Bank, he said, would stick with plans it announced last year to relocate its Manhattan offices from Wall Street to the former Time Warner Center on Columbus Circle. The bank will also proceed with plans to move to a new headquarters in the Moorgate section of London, he said.

But Sewing, a risk-management expert who has spent his entire career at Deutsche Bank, wants to set the stage for a new, more sober era focused on serving corporate executives rather than making big bets. Sewing is the first Deutsche Bank chief executive since the early 2000s without an extensive background in investment banking. On Monday, he appeared to repudiate the bank's drive since the late 1990s to compete with American megabanks.

"We lost our compass in the last two decades," he told reporters. "It is my personal purpose to connect this bank with what it used to be."

Analysts say the overhaul is the bank's long-needed reckoning with the failure of its expansion plan.

Deutsche Bank's move into investment banking dates back to 1989, when it took over Morgan Grenfell, and the 1999 takeover of Bankers Trust. The division helped drive strong profits in the 2000s and was part of an ambition to become one of the global banking giants, like JPMorgan or HSBC.

But the expansion, and the global financial crisis around 2008, also helped generate its subsequent problems.

Deutsche Bank wrestled for years with high costs, weak profits, and a low share price. It also paid billions in fines and settlements related to behavior before and after the global financial crisis.

"Some of these bankers will have to reinvent themselves," said Noah Schwarz, a senior client partner at executive-search firm Korn Ferry.

Hundreds of thousands of jobs have disappeared from the global finance industry since the 2008 crisis, and some of the biggest banks haven't stopped cutting. Automation and new technology have been replacing workers while reduced risk-taking has trimmed demand in areas such as structured finance. The front-office head count for investment banking and trading fell for a fifth year in 2018, according to Coalition Development Ltd. data. And hedge funds, which used to poach employees from Deutsche Bank's equities business, have cut back in recent years.

That doesn't mean there aren't opportunities for those shown the door at Deutsche Bank.

Some traders may end up at family offices -- investment vehicles for the ultra-wealthy that have been taking employees from Wall Street firms, Schwarz said. Investment bankers may be helped by hiring at boutique firms such as Evercore Inc. And Goldman Sachs Group Inc. has been more aggressive in looking beyond its walls for senior-level hires in the past year, while JPMorgan Chase & Co. and BNP Paribas SA have almost reversed all their post-crisis job cuts.

"Goldman has openly been recruiting," said Schwarz, who once worked at the firm. "That's been a fundamental change. It tells you that this is a fluid jobs market, and there will be more movement in the months and probably the year or two to come."

Information for this article was contributed by Jack Ewing of The New York Times; by Sonali Basak, Sridhar Natarajan, Jenny Surane, Stefania Spezzati and Yalman Onaran of Bloomberg News; and by Geir Moulson of The Associated Press.