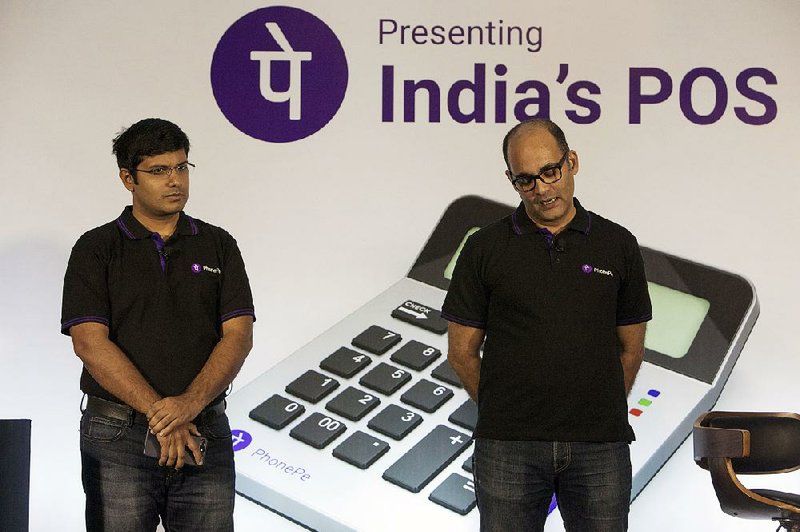 Rahul Chari (left) and Sameer Nigam, co-founders of PhonePe, speak during a product unveiling in Bengaluru, India, in 2017.

When Walmart Inc. paid $16 billion for control of India's e-commerce pioneer Flipkart Online Services Pvt. last year, the American retail giant got a little-noticed digital payments subsidiary as part of the deal. Now the business is emerging as one of the country's top startups, a surprise benefit for Walmart from its largest-ever acquisition.

Flipkart's board recently authorized the PhonePe Pvt Ltd. unit to become a new entity and explore raising $1 billion from outside investors at a valuation of as much as $10 billion, according to people familiar with the matter, asking not to be named because the discussions are private. The funding may close in the next couple of months, although the talks are not finalized and terms could still change, they said. The unit would then become independent with a distinct investor base, although Walmart-owned Flipkart would remain a shareholder. Walmart and Flipkart didn't respond to emails seeking comment.

PhonePe -- which means "on the phone" in Hindi and is pronounced "phone pay" -- has grown into one of India's leading digital payments companies. Its volume and value of transactions have roughly quadrupled over the past year as the country's consumers adopt the technology to transfer money digitally to businesses and one another. PhonePe is gaining ground on Paytm, which leads the field and is backed by Warren Buffett.

PhonePe is an "underappreciated asset," Edward Yruma, an analyst from KeyBanc Capital Markets, wrote in a recent research note. He said the business may be worth $14 billion to $15 billion, separate from Flipkart's e-commerce operation.

The startup was founded in December 2015 by three friends who left Flipkart to get it off the ground. Within a year, Flipkart founders Binny Bansal and Sachin Bansal decided to acquire PhonePe, realizing that solving payments friction would make it easier for consumers to buy online. Less than a year later, the Indian government made the unprecedented move to ban large banknotes to curb corruption and boost digital transactions. With this "demonetization," Paytm, PhonePe and other fledgling services flourished.

Cheap smartphones and cut-rate wireless data plans have lured millions of Indians online in the years since, growing the whole industry. In June, the PhonePe app reached 290 million transactions with an aggregate value of $85 billion, compared with 71 million transactions at $22 billion a year earlier, according to the company.

The service gained momentum by offering an array of options, including mutual funds, movie tickets and airline bookings. Earlier this year, it began using Bollywood star Aamir Khan in its advertising.

"Globally, hardly any privately held [financial technology] company has reached PhonePe's scale on both sides of the network so rapidly," Sameer Nigam, PhonePe's co-founder and chief executive officer, said in a statement, pointing to its 150 million-plus customers and more than 5 million merchants. "That's why the strong investor interest."

Walmart is still grappling with whether to take in strategic or financial investors, according to one of the people familiar with the matter. While a strategic investor would likely be better for growth, senior Walmart executives are concerned that such backers typically want more voting rights, the person said. Walmart wants to use the lessons from PhonePe in other operations around the globe.

Also unresolved are the future roles for Flipkart's outside investors. Tiger Global Management and Tencent Holdings Ltd. each hold board seats and equity stakes of about 5%, while Walmart holds about 80%. The board will have to navigate the companies' varied interests before any deal can be finalized.

The new funding is aimed at helping PhonePe's growth. The company plans to delve deep into the country's heartland, where rivals have yet to expand, with the goal of reaching profitability, one person said.

The market has vast potential. Digital payments in India are projected to reach $1 trillion by 2023 from about $200 billion now, said Credit Suisse Group AG. Beyond PhonePe and Paytm, Google Pay, Amazon Pay and the soon-to-start WhatsApp payments service will compete for customers. They're taking advantage of India's Unified Payment Interface, a technology backbone that includes 140 of the country's banks and digital payments companies.

"The market is getting bigger and [financial technology] startups are becoming innovative," said Kunal Pande, partner in advisory services at KPMG. "The accelerated growth in many fintech areas is attracting investor interest."