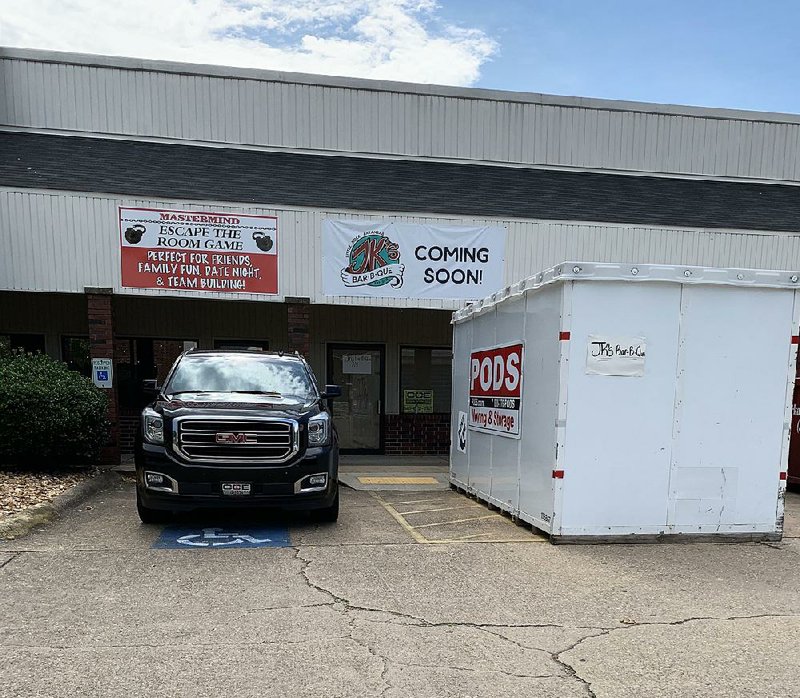 Baja Grill, which started out as a Benton-based food truck before taking over the brick-and-mortar space at 5923 Kavanaugh Blvd. in Little Rock’s Pulaski Heights on May 14, is returning to its Saline County roots, planning a second location in downtown Benton later this year. That we’ve gotten from its website, eatbajagrill.com. From Shelli Poole’s MySaline.com, we learn that it’s going into the long-abandoned Palace Theater, 224 W. South St., Benton, which area developer Shawn Hipskind is in the process of renovating.

Mysaline.com also reports that Diana Young is the new owner of the former Ed and Kay’s at 15228 Interstate 30 North, Benton, which most recently housed Bruno Beqiri’s Bruno’s Italian Villa, and which has been vacant for more than a year. She’s renovating the place in preparation for the opening of Blue Heaven, the name deriving from the blue siding she’s installing on the exterior. Poole reports that the renovations include a new roof and gutting the interior and the installation of some of the kitchen equipment that came from the late Cajun’s Wharf. The menu will once again focus on home cooking, with additional “fresh” options and more grilled items, with eventual plans for farm-to-table eats that Young will be growing in a garden on the land next to the restaurant. Target to open is approximately four months. Ed and Kay’s occupied the building for more than two decades before closing in mid-2014.

And MySaline.com also reports the closure, at close of business Sunday, of Silos Cafe, 510 Arkansas 5 North, Benton. Co-owner Callie Havens, who opened the place with husband Todd and Todd Taylor of East End Cafe in Hensley less than a year ago in the former Abe’s Ole Feed House, tells Poole that they’ve wanted to get out of the restaurant business and put the place up for sale; in less than a week, they got a surprising quick offer to buy the building and the property; a nondisclosure agreement requires that they can’t reveal the buyer for 30 days but it it will certainly be a restaurant. Meanwhile, employees will get paid and holders of gift certificates will receive a reimbursement with proof of purchase.

JK’s Bar-B-Que is “coming soon” in the two storefronts next-door to Thirst N’ Howl in the Pinnacle Valley Plaza strip center at 14710 Cantrell Road, Little Rock. More than that, we cannot yet tell you, except to note via a drive-by over the weekend that construction is in progress.

Los 3 Potrillos, 1090 Skyline Drive, Conway, is moving, more or less across the street, into the former Shucked Surf & Turf Shack, 2480 Sanders Road, with a “winter 2019” target to open, according to a Monday post on the restaurant’s Face-book page (facebook.com/los3potrillosconway). Their phone number is (501) 327-1144.

Mama D’s Diner, which in May opened in the revolving-door diner building at 250 E. Military Drive, North Little Rock, has now achieved international attention after various media and social media outlets picked up the item on its menu called “My Girlfriend Is Not Hungry.” For $4.25, the kitchen adds to your entree order extra french fries and your choice of two chicken wings or three fried cheese sticks, for the benefit of the plus-one who, after pleading lack of hunger, nevertheless picks your food off your plate. A photo capture of the menu description has gone viral. Hours are 6 a.m.-7:30 p.m. Monday-Saturday, 6 a.m.-4:30 p.m. Sunday. The phone number is (501) 747-1991.

Apparently, however, it’s not unique to Mama D’s — Jaya Saxena, writing for the website eater.com (eater.com/2019/7/2/20679016/my-girlfriend-isnt-hungrymenu-trend), cites the Mama D’s menu (though it puts the restaurant in Little Rock), decrying it as part of a nasty and misogynistic trend: “Restaurants in Oregon and New York will double your fries. Tangled Hickory in Wisconsin will double your fries and add extra onion rings. One Night Stan’s in Calgary will double your fries and add three honey biscuits for the girl who just wants biscuits and fries for dinner (an icon). And the Tipsy Coyote in Scottsdale, Ariz., has named their entire salad menu ‘My Girlfriend’s Not Hungry,’ because no straight man would deign to eat lettuce.”

And reviews.org, a Web-based service that makes recommendations based on “thoroughly researching products and services for your home,” lists The Root Cafe, 1500 Main St., Little Rock, as Arkansas’ No. 1 restaurant in its listing of the “top-rated restaurant in each state 2019” (reviews.org/trends/top-rated-restaurant-in-every-state), based on the number and level of Yelp reviews. The cafe earned 4.5 stars, based on 520 reviews.

The report errantly calls the cafe’s “Type of food: Burgers” (the cafe does serve burgers, and darn good ones, but it’s not the main menu focus, which is an eclectic mix of meat, vegetarian and vegan sandwiches and entrees).

The methodology is a little screwy: “We pored through data on Yelp and found the top three restaurants (both by ratings and number of reviews) for each state’s most populous city. We then chose the highest-ranked restaurant of the three based on the reviews.” So by definition the top restaurant was going to be in Little Rock, excluding from consideration many of the fine establishments — and potential winners — in, say, Northwest Arkansas.

The listing provides this presumably representative customer review quote from a Janna B. of North Little Rock: “Simple, amazing food that you won’t get in a hurry. The special of the day, the Reuben, was excellent. The sweet pickle made the sandwich. The side salad with house dressing is wonderful. The curry chicken salad sandwich was also delish. Check out the homemade lemonade. The sparkling lavender was tart and refreshing. For dessert, the almond bars and cookies will make you sigh with pleasure.”