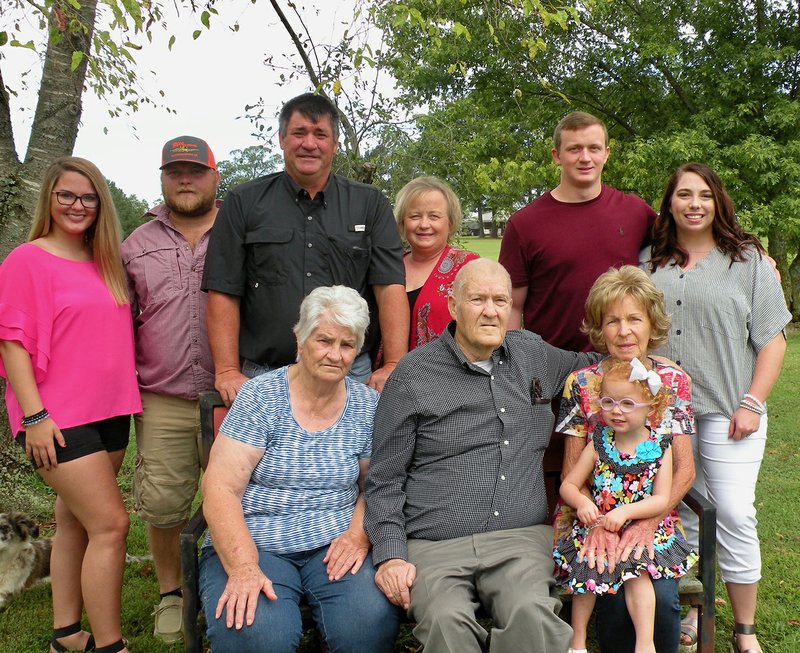 McCRORY — Johnny Wayne and Jennifer Taylor grew up just outside McCrory in what was once called the McDonald community. They went to high school together and now farm together at J&J Taylor Farms. They are the 2019 Woodruff County Farm Family of the Year.

“When they asked me if we would be interested in accepting the farm-family honor, I said I’d have to ask my wife,” Johnny said, smiling.

“She said yes, so here we are. … It’s an honor, for sure. I’ve been [farming] for a long time. This is the first time they’ve ever asked me,” he said.

“I’ll tell you what I’ve liked about it,” Jennifer added.

“I got a lot of things on my honey-do list done,” she said, laughing, as she talked about getting ready for the judges and others to visit their farm in mid-June.

Johnny and Jennifer, both 51, are 1986 graduates of McCrory High School.

“I didn’t even like him in high school,” Jennifer said, laughing again.

After high school, the two went their separate ways but later reconnected, then married in 1998. They have one son, Caleb McElyea, 25, who lives in McCrory with his wife, Melanie, and their 3-year-old daughter, Lanie Paige.

“We do it all for her now,” Jennifer said, referring to their granddaughter. “She is our pride and joy.”

Johnny and Jennifer are third-generation farmers.

Jennifer is a daughter of Marlene McDonald and the late Jimmy Dale McDonald. Jennifer has three siblings — a brother, Jeff McDonald, who also works on the farm, and two sisters, Chris Alumbaugh and Nicole Meredith. Jennifer is a granddaughter of the late Frank and Georgia Ashburn and Trig and Susie McDonald.

Johnny and Jennifer currently farm some of the old Jacobs, Taylor and McDonald land.

Johnny has been farming for 33 years. He started with 1,000 acres, which he rented. Now he and Jennifer farm 2,640 acres in Woodruff and Jackson counties, which includes 227 acres they own and 2,413 acres they lease from several landowners, including M.D. Thompson and Son, Shirley Jacobs, the W.C. Young Trust and Black Dog Acres LLC.

Today, the Taylors raise 625 acres of long-grain rice, 715 acres of medium-grain rice and 1,300 acres of soybeans, all of which are irrigated. They book their crops throughout the year through multiple contractors, including Delta Grain, Poinsett Rice, Erwin Keith, M.D. Thompson and Farmers Granary.

Jennifer and her mother, Marlene McDonald, are teaching Lanie more about farming by having a large produce garden every year. They mainly raise squash and okra.

“The importance of this garden is to teach Lanie about agriculture and growing our own produce,” Jennifer said. “We do not produce to sell, but we share our produce with the community, delivering to banks and local businesses in McCrory to distribute to their customers.”

Marlene takes care of Lanie during the week while her parents work.

“It’s a real blessing to me, but I am glad when 6 o’clock rolls around,” Marlene said, smiling.

“Many farmers in our area simply didn’t pull through, so land became available to rent,” he said. “I had worked on the farm my entire life and couldn’t imagine not farming. In 1986, I was a senior at McCrory High School, and Noal Lawhon financed my farming operation. He did this my first three years of farming. In 1989, the Bank of McCrory (now First National Bank) became my financial lender.

“Jennifer and I married in 1998, and she joined me on the farm part time,” Johnny said. “We are both third-generation farmers and can’t imagine life without farming.”

Johnny said he has seen many changes to the farming industry.

“This year alone, we had to update our surveying equipment from the old laser/analog system to the high-tech satellite system, which has been a challenge … learning the system while keeping the farm running as smoothly as possible,” he said. “Several of our tractors have also been equipped with GPS satellite/auto-steering systems. We hope to add this equipment to all tractors in the future. More land-leveling is also scheduled in our future.”

Although Johnny was not a member of FFA in high school, he has supported the local FFA chapter for more than 30 years.

“They didn’t have it when I was in high school,” he said. “I was in shop, though (referring to agricultural/vocational classes).”

The Taylors continue to support FFA students in the area, with many of them working on the Taylor farm throughout planting and harvesting seasons.

Jennifer said their son, Caleb, who graduated from McCrory High School in 2012, was not involved in FFA but did support the organization through his work in shop classes. Caleb chose not to pursue farming and, instead, works for the state of Arkansas. His wife, Melanie, works at ARCare in Augusta. They were married in 2015.

The Taylors’ nephew, Zac McDonald, is one of those FFA students they have helped over the years.

“He would work on the farm weekends and summers while attending Searcy High School,” Jennifer said. “After graduation, he came on full time for the farms. He is now following in the farm business and in his second year of farming on his own. He has 1,400 acres of rice and soybeans in Jackson County. He is the fourth-generation McDonald farmer.”

Zac, who graduated from Searcy High School in 2012, and his girlfriend, Morgan Simmons, live in McCrory. Morgan is a licensed practical nurse at ARCare in Augusta.

Johnny and Jennifer both enjoy deer hunting. When she has time, Jennifer, who works full time at Curtis Family Clinic in Searcy, does vinyl and embroidery work for family and friends. She also volunteers and helps raise funds to help students with their school supplies, as well as donating some Saturdays at the local thrift store. Additionally, Jennifer feeds the farm crew on the weekends, maintains the yard and helps on the farm as needed.

The Taylors have seen hard times on the farm, including a tornado in 1997 and recent flooding, which has meant replanting acres of soybeans.

They have also overcome several problems since they started farming, including drainage issues; red rice, which has been “greatly reduced”; elimination of herbicide-resistant weeds; and improvement of chemical drift when spraying in order to improve the air quality of the fields.

They are also interested in protecting wildlife in the area.

“As soon as the rice is harvested, flashboard risers and pipes are closed, allowing the field to flood,” Johnny said. “This provides food, cover and resting areas for waterfowl during migration.

“We also leave one-half acre per each 40 acres of soybeans unharvested each year to provide food and cover for wildlife,” he said,

Johnny said he is content with J&J Farms as it is now.

Jennifer said she does think about retiring … some day.