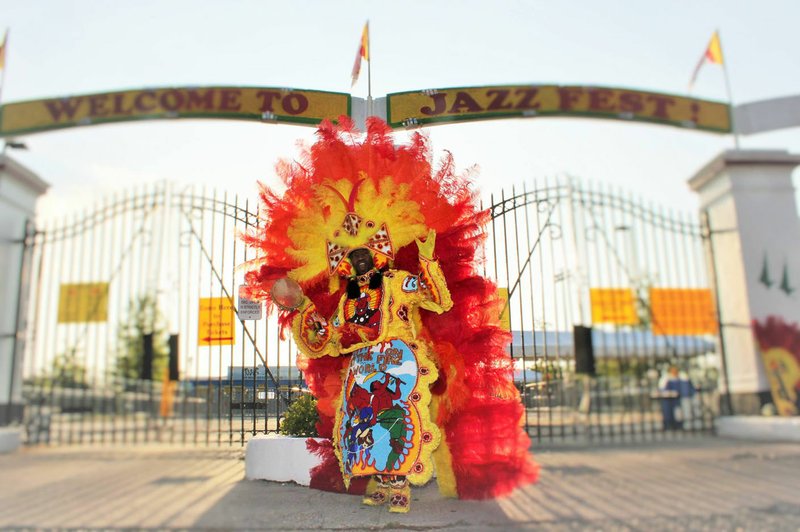 Courtesy photo. The best way to approach the performance, Big Chief Juan Pardo offers, is to participate in the call-and-response nature of the chanting. "That will give you a direct connection to what is happening in New Orleans on Mardi Gras when we practice our culture among the public. The community comes out of their homes, you would hear the drums and the chanting, and it would kind of be like a village call to gather."

"It's always been a representation of the pride of the neighborhoods," Big Chief Juan Pardo begins.

"And it's always also been a culture of rebellion, in the sense that an oppressed people or group that was looked upon as not being important or the most beautiful found a way to defy that statement by being the most beautiful thing that there is, and choosing Mardi Gras to be the day to come out to express that."

Pardo is the chief of the Golden Comanche tribe of Mardi Gras Indians, a heritage dating back nearly two hundred years in New Orleans. Traditionally, Pardo explains, the black communities would celebrate Carnival in the back streets of the city while non-people of color were at the Mardi Gras parades. It was a time when Caribbean and African descendants could participate in ancestral tribal practices in celebration of the melded cultures of the area, including the Native American peoples who inspired the elaborate suits and artistic elements worn by the Mardi Gras Indians.

"That's the reason why I perform in the suit that we wear on Mardi Gras day -- so that you're seeing and hearing a representation of the culture in its authenticity," Pardo says of performing all over the world. "It's definitely not like a show of pageantry; it is still culture on stage."

Much of the Mardi Gras festivities in New Orleans entail competition between tribes -- through artwork, suit design, song and dance. But performances like the one Pardo will present at Crystal Bridges Museum of American Art in Bentonville at 7 p.m. July 20 as part of the Forest Concert Series are more focused on sharing and celebrating the culture. Sometime in the 1970s, Pardo reveals, electric instruments and funk elements were fused with the tribal music to create the "Indian funk" Pardo performs today.

"Kind of like the dish we have in New Orleans, gumbo, all these cultural tribal practices just came together, which really makes [Mardi Gras Indians] as old as the first people coming together on that soil," Pardo muses. "That's what makes it such a unique, rich culture and really more important than tons of Americans even understand."