Arguments wrap up in opioid case 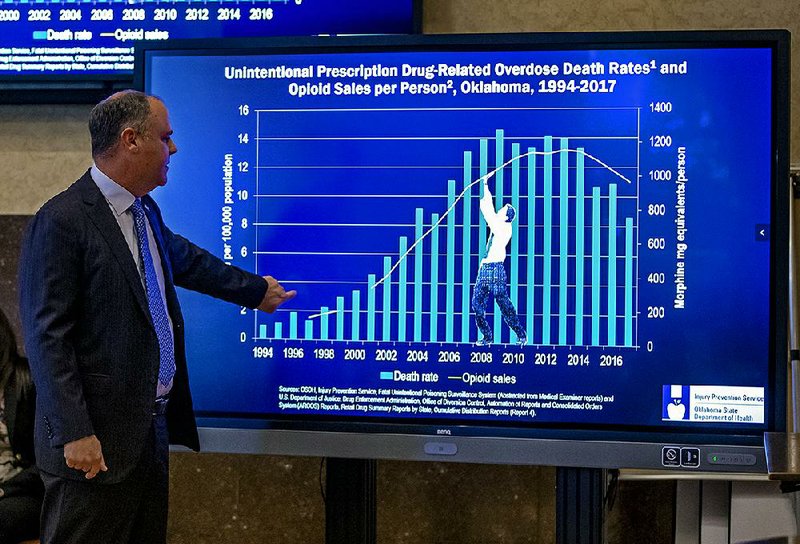 NORMAN, Okla. -- Consumer products firm Johnson & Johnson was a "kingpin" company that helped fuel the most devastating public health crisis in Oklahoma history, the state attorney general argued Monday during the close of his case against the opioid drug manufacturer.

Mike Hunter said the New Jersey-based company and its subsidiaries, including Janssen Pharmaceuticals, created a public nuisance by launching a "cunning, cynical and deceitful" marketing campaign that overstated the benefits of opioid drugs for treating chronic pain and understated the risk of addiction.

"There was a simple reason for the crisis: greed," Hunter said. "The greed of the pharmaceutical companies caused the crisis."

Johnson & Johnson engaged in a scheme to dupe doctors into over-prescribing addictive medications that "wrecked thousands" of families in the state, Hunter said.

"They blame everyone else," Hunter told Cleveland County District Judge Thad Balkman. "The only question is whether the Oklahoma taxpayer or the kingpin" should pick up the tab for the costs of addressing the state's epidemic, the attorney general said.

After closing arguments, Balkman asked both sides to present written summaries of their cases by July 31 and that he would then take about a month to issue his ruling.

Oklahoma's case is being closely watched because it's the first state case to proceed to trial. It could help shape negotiations over roughly 1,500 similar lawsuits filed by state, local and tribal governments that have been consolidated before a federal judge in Ohio.

Attorneys for Johnson & Johnson argued they participated in a lawful and strictly regulated industry and that their marketed products represented only a tiny fraction of the opioids used in Oklahoma.

Oklahoma's attorneys have pointed out that two former Johnson & Johnson subsidiaries, Noramco and Tasmanian Alkaloids, produced much of the raw opium that is used by other manufacturers to produce the drugs.

Larry Ottaway, an attorney for the company, said opioid drugs serve a critical health need -- to address chronic pain that affects thousands of Oklahomans every day.

During his closing argument, Ottaway played brief clips from a half-dozen Oklahoma doctors who testified about the desperate need some of their patients have to deal with chronic pain.

"I trust you to do the right thing," Ottaway told the judge. "I trust you like I trust these Oklahoma doctors, and I think you should trust them as well."

During the trial, the company provided testimony from an expert on worldwide drug smuggling who rejected the state's claim that the opioid promotions by the company were similar to those of illegal traffickers.

Ottaway also dismissed the state's claims the company's sales reps were tasked with duping Oklahoma doctors into ramping up opioid prescriptions regardless of the risks and were lavishly awarded for doing so.

"The state would have you believe we marshaled an army to come here to mislead doctors about risk and benefits of opioids," Ottaway said. "Not true."

He also asked Balkman to remember the state didn't provide evidence from any Oklahoma doctors who could support claims that Johnson & Johnson or Janssen officials misled them about the addiction and overdose risks of opioids.

Attorneys for Oklahoma also outlined a plan developed by state mental health and addiction specialists to abate the opioid crisis that would range between $12.6 billion for 20 years or $17.5 billion over 30 years. Attorneys for Johnson & Johnson say that estimate is wildly inflated.

Included in the abatement estimate is a need for the state of Oklahoma to hire 1,734 new employees at a cost of about $123 million each year, Ottaway said.

"The state's plan is simply untenable," he said. "It seeks billions of dollars for services already being provided."

Before the start of the trial on May 28, Oklahoma reached a $270 million settlement with Oxycontin-maker Purdue Pharma and an $85 million deal with Israeli-owned Teva Pharmaceutical Industries Ltd.

Information for this article was contributed by Sean Murphy of The Associated Press, and by Jef Feeley of Bloomberg News.