President doubles down on feud with lawmakers 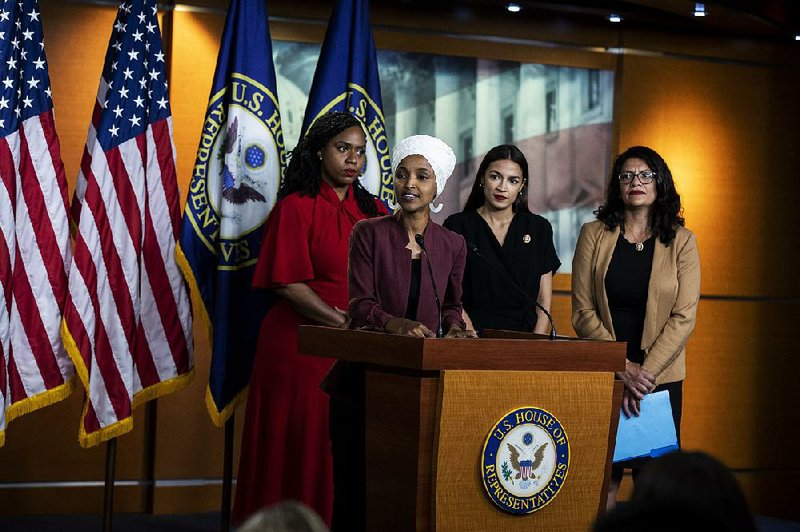 WASHINGTON -- President Donald Trump on Monday amplified his rhetoric against Democrats in Congress, criticizing a group of lawmakers and describing comments by House Speaker Nancy Pelosi as racist.

On Sunday, he said a group of female lawmakers should "go back" to the countries they came from, though all but Omar were born in the United States. On Monday, Trump showed no signs of backing down, saying the lawmakers hated America.

"Trump feels comfortable leading the GOP into outright racism, and that should concern all Americans," the freshman Democrat from the Bronx wrote on Twitter.

Trump's new front against Pelosi came after she announced that the House would move to officially reject the president's tweets about members of Congress. "Our Republican colleagues must join us in condemning the president's xenophobic tweets," she said in a letter to lawmakers.

She reacted hours after Trump tried to turn the situation around by accusing the congresswomen of "foul language & racist hatred" and demanding an apology from them.

Pelosi criticized the president Sunday for his remarks and said that his slogan, "'Make America Great Again,' has always been about making America white again."

The president made clear Monday that he had no qualms about the tweets that set off the dispute.

"It doesn't concern me because many people agree with me," Trump said at the White House. "A lot of people love it, by the way."

Trump's comments drew nearly unanimous condemnation from Democrats and a rumble of discontent from a subset of Republicans.

Sen. Mitt Romney of Utah, the Republican presidential nominee in 2012 and now one of Trump's most vocal GOP critics, said the president's comments were "destructive, demeaning, and disunifying."

Rep. Michael Turner, R-Ohio, said Trump's comments Sunday were "racist" and that the president should apologize. And Rep. Will Hurd, R-Texas, the House's only black Republican, condemned the president's remarks, calling them "racist, and xenophobic."

Hurd also said the president's narrative was politically damaging because it is uniting Democrats at a time when the party is experiencing a "civil war."

"I think it's a mistake and an unforced error," said Sen. John Cornyn, R-Texas, a member of the party leadership. "I don't think the president is a racist."

But Sen. Steve Daines, R-Mont., said people in his state are "sick and tired of listening to anti-American, anti-Semite, radical Democrats trash our country and our ideals." Daines tweeted: "I stand with realDonaldTrump."

Rep. Chip Roy, R-Texas, tweeted Sunday night: "POTUS was wrong to say any American citizen, whether in Congress or not, has any 'home' besides the U.S." But he added that "Reps who refuse to defend America should be sent home 11/2020," referring to November 2020, when the next major election is held.

Trump tweeted Monday afternoon that "The Dems were trying to distance themselves from the four 'progressives,' but now they are forced to embrace them. That means they are endorsing Socialism, hate of Israel and the USA! Not good for the Democrats!"

While Trump's remarks drew Democrats together in defense of their colleagues, his allies noted he was also having some success in making the controversial progressive lawmakers the face of their party.

The president, reciting a list of the quartet's most controversial statements, questioned whether Democrats should "want to wrap" themselves around the group.

The four lawmakers fired back late Monday, condemning what they called "xenophobic bigoted remarks" from the president and renewing calls for their party to begin impeachment proceedings.

Trump "does not know how to defend his policies, and so what he does is attack us personally," said Ocasio-Cortez.

Pelosi announced Monday that the House would vote on a resolution condemning Trump's comments. The Senate's top Democrat, Charles Schumer of New York, said his party would also try to force a vote in the GOP-controlled chamber.

Pelosi said the resolution, which has yet to be drafted, would make reference to a speech by President Ronald Reagan in which he said that "if we ever closed the door to new Americans, our leadership in the world would soon be lost."

For months there has been a rift between Pelosi and the four Democratic lawmakers, and last week tensions grew when Pelosi said they had no following in Congress. The four lawmakers, who call themselves "the squad," opposed the passage of a $4.6 billion aid package for the border because they said it supported Trump's immigration policies.

The tone of the president's remarks, however, gave Democrats something to agree on.

Trump's comments Monday also addressed strains from earlier this year, when Omar sent jolts through her own party for criticizing Israel and suggesting that supporters of Israel were pushing for "allegiance to a foreign country."

"I can tell you that they have made Israel feel abandoned by the U.S.," Trump wrote in a tweet.

Jonathan Greenblatt, head of the Anti-Defamation League, said Trump's use of Israel in his comments hurts the Jewish community.

"He doesn't speak for any of us," Greenblatt wrote in a Twitter post Monday. "We call on ALL leaders across the political spectrum to condemn these racist, xenophobic tweets & using Jews as a shield."

Omar addressed Trump in a tweet Sunday, writing: "You are stoking white nationalism (because) you are angry that people like us are serving in Congress and fighting against your hate-filled agenda."

The latest provocations came after Trump last week inserted himself into the rift between Pelosi and Ocasio-Cortez, offering an unsolicited defense of the Democratic speaker.

Republicans said Trump told advisers later that he was pleased with his meddling, believing that dividing Democrats would be helpful to him, as would elevating any self-proclaimed socialists as a way to frighten voters to steer clear of their liberal politics.

The president has told aides that he was giving voice what many of his supporters believe -- that they are tired of people, including immigrants, disrespecting their country, according to three Republicans close to the White House who were not authorized to speak publicly about private conversations.

Republicans, for their part, largely trod carefully with their responses.

Marc Short, chief of staff to Vice President Mike Pence, said "I don't think that the president's intent in any way is racist," pointing to Trump's decision to choose Elaine Chao, who was born outside the country, as his transportation secretary.

Chao is one of the few minority-group members among the largely white and male aides in high-profile roles in Trump's administration. She is the wife of Senate Majority Leader Mitch McConnell, R-Ky., who declined to comment Monday on Trump's comments.

Sen. Lindsey Graham, R-S.C., a close ally of the president who golfed with him over the weekend, advised him during an appearance on Fox and Friends to "aim higher," even as he accused the four Democrats of being "anti-Semitic" and "anti-American."

Graham and Sen. Patrick Toomey, R-Pa., suggested that the president steer clear of personal attacks and instead focus on policy.

"We all know that AOC and this crowd are a bunch of communists," Graham said on Fox News. "They hate Israel; they hate our own country." But he also pushed back against the president's suggestion that the women are not American.

"They are American citizens," Graham said. "They won an election. Take on their policies. The bottom line here is this is a diverse country."

Trump said he disagreed with Graham about aiming higher.

"These are congressmen. What am I supposed to do, just wait for senators? No," Trump said.

Print Headline: President doubles down on feud with lawmakers