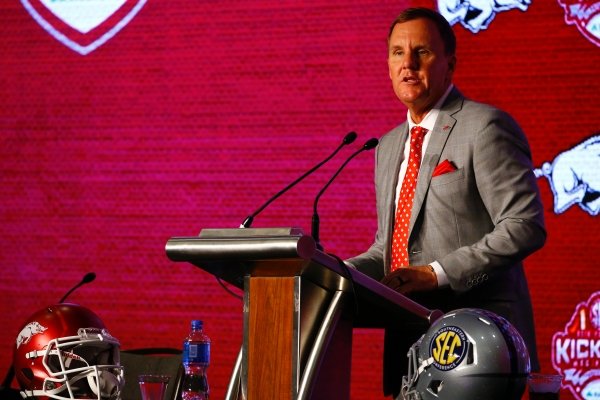 – It's an honor and privilege to be the head football coach at Arkansas. Morris thanked the local and state media for covering the program.

– 235 days ago the team walked off the field at Missouri and began preparing for 2019. The true measure of someone, players and coaches who came back, is how they respond. Last season was hard, but we learned a lot as a staff and responded by putting together one of the best recruiting classes in school history. Players responded by buying in.

– We have some of the greatest fans in college football that deserve a successful program.

– Sosa Agim, Scoota Harris and Devwah Whaley represent what being a college football player is about. They have an edge, they're great players and are even better students and men. Agim is a graduate and 4.0 student last semester. Harris will graduate in December, and Whaley will as well. Best thing about them is they're a few of the best players on our team and represent what this program is about.

– Offensively, our philosophy hasn't changed. We've made tremendous strides and attracted the right transfers. We're excited about the quarterback battle ahead. At running back, Whaley and Rakeem Boyd, one of the top backs in our league, and Chase Hayden give us a lot of depth.

– Cheyenne O'Grady has the chance to be one of the best tight ends in the country. He's a big-time playmaker.

– I feel like we have the pieces defensively in Year 2 to make improvements. It's time for a number of defensive linemen to take the next step. I'm excited about Kam Curl and Joe Foucha, too. The back end of our defense should be better. Mistakes happen when you play young guys, but how they responded was encouraging.

– Harris is one of the best at the linebacker position. Bumper Pool may have one of the best names in college football. Excited about Hayden Henry and Grant Morgan as well.

– As far as special teams, we know we have to be better here. Punting was a weakness, so we went out and added a punter - Sam Loy - to add competition to the room as we enter fall camp.

– Last season wasn't fun and going through tough times wasn't fun, but there's a process you have to go through. Investments made by players and coaches will show up on Saturdays. (End of Morris' opening remarks)

– When you look at the way we recruited during the 2-10 season says a lot. The passion level that our fans have, the passion level to have a player want to come be a part and come and play quickly helped us in the first year. I'm excited about how we're going to recruit, and we're off to a great start right now. We have to be consistent in the way we recruit. Building a program is about being consistent. Going into Year 2 we're in really good shape with where we're at. It's like shaving. If you don't do it every day, you look like a bum.

– On Joe Craddock: He's been with me going on eight years now. We think a lot alike. I've developed some pretty good quarterbacks along the way. I anticipate with he and I working together ... I'm excited about what he and I can do with our quarterbacks.

– Expectations: Inside our program and talking to our seniors, they want to leave their legacy. Getting to the postseason is definitely a goal of ours. I definitely believe ... I'm asking for our program to be consistent each and every day.

– Lessons learned from 2018: The challenges this league brings every week, I knew about them, but it's a line-of-scrimmage league. That's why we went out and recruited like we did in those two areas.

– The transfer portal has allowed our staff to be active in that area. It gives our staff and people who want to build programs opportunities. It's just unfortunate that there's more players in the portal than there are scholarships available.

– I don't have a date set for naming a starting quarterback. We do plan to run someone out there for the first game, he joked. The sooner the better because I want the team to rally around one guy. It's going to have to work itself out, and they've had a tremendous summer. Talking to our defensive guys, I ask them what it looks like on that side of the ball. Nick Starkel has played in this league and knows what it's about, so we've got a great battle going.

– Recruiting Hicks and Starkel: Ben played for us for three years and recruited him out of high school. He's a guy who is competitive - probably the biggest competitor I've been around. Watching him grow has been impressive. He's stood in that team room in a situation like ours. He understands the culture. He grabbed the young guys from the day he got here and took them under his wing. His leadership has been valuable.

Starkel is very experienced. I've known him since high school, too. To watch the way the ball jumps out of his hand ... his decision-making, accuracy, etc., is fun to watch. We're excited about having him and knowing he has two years with us. He saw an opportunity to come in and play in a league he's familiar with. His confidence level is extremely high.

– On the new uniforms: It's a great look, isn't it? Twitter blew up when we announced those. I got with our equipment group when I got here and asked how we can get back to that uniform. To be able to unveil those uniforms, we're going to wear them every opportunity we get. That's the look I want us to have.

– On growing in Year 2: As you go through it, and you're living the moment, you reflect back on your experiences. You have to be confident and know who you are and not waiver. I've been in this spot before, and I'm confident I understand what it looks like getting out of it. A lot of members of our staff have been in this spot.

– Playing Missouri in Little Rock: It'll be a great atmosphere. Playing there last year it was a driving rainstorm but the atmosphere was great. We have a long way to go before we get there, though.

– Moving to natural grass: We're in the Natural State, and I'm a big runner. I love to jog. You see how immaculate a grass field looks going by Baum-Walker Stadium and Bogle Park. There's nothing better than a natural grass football field on a Saturday.

– More on O'Grady and Hudson Henry: O'Grady is a guy who oozes talent. He went through some challenging times last year with the standards we were setting. When you saw him begin to buy in and saw what we can be, there's no doubt he can be one of the best in the country. He's the top playmaker we have coming back. It's about how good he wants to be. It's about driving him and pushing him. We've gone to a player-led football team, and players have pushed him.

Hudson Henry is a phenomenally talented young man who is going to play and have a great future. We'll see how his transition to fall camp goes.

– An anchor revealed Morris eats a bag of Sour Patch Kids and drinks a Red Bull prior to games.

– On Hicks: Knowing Ben from his high school years, watching him progress the three years he was with us, he's stood in front of a 2-10 football team and dug his way out. His experience alone will help. He knows the offense. Bringing him in in January elevated the entire quarterbacks room. We knew there was a chance if Connor Noland had a good season on the baseball field he'd stick with baseball, so we had to be aggressive on the transfer market.

– From a philosophy standpoint, we want to be up-tempo. We want to be fast. We were far from that last year, but we've taken steps to get there this year. We want to operate smart and effective, too.

– On building the defense: It's a line-of-scrimmage league. If you don't have the depth on both sides of the ball then you're going to be in trouble. From a defensive line standpoint, we had to create depth. We had a good nucleus coming back, but we needed more. The value of experience for our defensive backs is big. Having Scoota Harris and Sosa back helps so much. We're relying a lot on their leadership.

Chad Morris is in the house. Oh, and Agim is legit carrying that Chucky Doll pic.twitter.com/q3EpRgf2MP

– Chad Morris said defensive back D'Vone McClure has moved to an outside linebacker position, and quarterback Daulton Hyatt will play receiver.