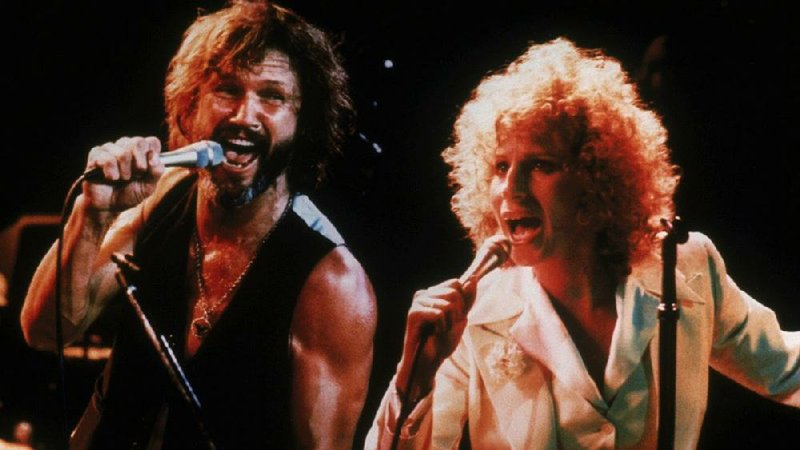 Kris Kristofferson and Barbra Streisand star in the 1976 version of A Star Is Born.

"If there were floods, I'd give a dam"

Karen went to Mexico for a week recently I stayed up and watched Bradley Cooper's A Star Is Born again.

I don't really know why, other than I didn't want to cheat on her by watching any of the usual programs we watch together and there wasn't any sports programming that caught my attention. And I had a little guilt at having sort of dismissed the film the first time through. I wanted to give it another chance.

One of the unfortunate things about watching movies professionally is that sometimes you feel obligated to see certain films just to check them off your must-see list. I didn't review A Star Is Born, but it was obviously a film with which I needed to be conversant -- to have an opinion about -- and so we knocked it out one night, vaguely resenting that it kept us from doing whatever it was we'd rather have been doing at the time.

The second viewing wasn't revelatory; I still like the movie OK. There are certain details and textures that are really good, I like the central performances, and I really can forgive certain incredible scenes for the sake of the narrative. But overall it has too much obligatory blockbuster overtness in its DNA to really hit my sweet spot. I think I prefer the Kris Kristofferson-Barbra Streisand version from 1976, though I imagine if I watched that film again (I don't think I've seen more than a few minutes of it in the past 40 years) I'd probably not remember it quite as fondly. The best way to watch that A Star Is Born is with the sound down -- there are a lot of cool visuals.

Actually that's not fair -- Kristofferson is really good in his role as the doomed rock star, who's called John Norman Howard in this version. And Streisand, albeit burdened with a ridiculous perm, isn't bad either. What really wrong with the 1976 Star Is Born is, that despite having two American musical icons in the lead roles, most of the music in the film is inane.

It doesn't help that neither Streisand nor Kristofferson are rock singers, but the real problem is that the ersatz rock they're given to sing is just atrocious. While the Paul Williams-Streisand's composition "Evergreen (Love Theme from A Star Is Born)" is the track that everyone remembers, because it became a No. 1 single, won an Oscar and a Grammy and became a fixture of soft rock radio but none of those things makes it a good song. It's a windy melody with insipid lyrics.

But it's probably the best song in the film.

It's interesting that Kristofferson didn't write anything at all for the movie -- and he's saddled with some genuinely terrible songs, like "Watch Closely, Now," "Hellacious Acres" and "Crippled Crow" which begins with the immortal lines:

Baker standin' on the corner sing your song

Sing it for a dime

Bring them all the pain you carried down the line

I know the lyric sheet says "beggar" not "baker." But listen to the song for yourself. A couple of lines later, Kristofferson somehow makes "ladder" sound exactly like "valley." Not that any of it matters.

But at least Kristofferson -- who only gets those three solo tracks on the soundtrack album -- sings his nonsense with something like raspy conviction. Streisand has negotiate the faux gospel "Everything," which employs these lines as a bridge:

I'd like to plan a city, play the cello

Move into the white house, paint it yellow

And if it's not too much

One who'd go out as I came in

I've got to grab the big brass ring

So I'll have everything (everything)

Of course, the soundtrack album was the biggest selling record either she or Kristofferson were ever associated with.

With this as context, it's interesting to note how much Cooper got right about the music in the new film. While the music is the worst part of the 1976 film that features two iconic musicians, it's the best part of Cooper's film -- and not just because of Lady Gaga's performance. Cooper makes the laconic Jackson Maine a lot more than the caricature he could have been, his portrayal is seamed with self-doubt and survivors's guilt. Maine, and Cooper too, understand that talent is cheap and what's important is, as he repeatedly tells Ally, "having something to say."

Not that all the songs in the latest Star Is Born do that -- mostly they're just OK. (And we could have a discussion about how Jackson is able to finish, arrange and teach his band a song he has heard only once in a parking lot while under the influence of a lot of alcohol in less than 24 hours.) They're better than the songs in the 1976 version but I'm not listening to them on shuffle/repeat.

Except for "Maybe It's Time," the Jason Isbell song that becomes something of a motif for Jackson's character. It's the song Cooper sings in the shut-down drag club, accompanying himself on guitar. It's like a lot of Isbell songs, with a deceptively simple chord structure (it's in G, and you can play it in first position) and a deceptively deep lyric:

It takes a lot to change a man

Hell, it takes a lot to try

That part's pretty straightforward, the sentiment is simultaneously wistful and anti-nostalgic, if the singer isn't being ironic. Cooper as Jackson performs it in a laconic off-hand style and he puts down the guitar before he gets to the key verse (which we do hear later on, though in a context where the audience might be forgiven for not listening closely to the words):

When I was a child they tried to fool me

And this world's one big ol' Catherine wheel

A Catherine Wheel was a torture device used to execute criminals in the most agonizing way possible. That Jackson Maine would reach for such a dark and fatalistic image is a simple, folky song that might otherwise have been taken as the ballad of a cultural reactionary bemoaning the absence of prayer in schools says something about the character.

In any case, my basic opinion of the movie didn't change. It's not a Top 10 film, it's a good Hollywood film. I doubt I'll retain much of it -- it certainly won't replace the 1976 film as the A Star Is Born I immediately think of when I think of A Star Is Born.

For the record, I do like the 1937's "original" (it has become conventional to note that the movie bears some striking "similarities" to 1932's What Price Hollywood?, a film I have never seen), though it has no musical component at all -- in it Janet Gaynor and Fredric March, are film stars. And the 1954 version with Judy Garland is one of the great American musicals.

But those movies simply aren't in my wheelhouse, because my experience of them was quasi-academic -- I didn't see them as a moviegoer, I caught up with them as a critic. And most of the time, that seems to make a difference.

For better or worse, my A Star Is Born always involves Kris Kristofferson throwing a case of Jack Daniels through a radio station window.