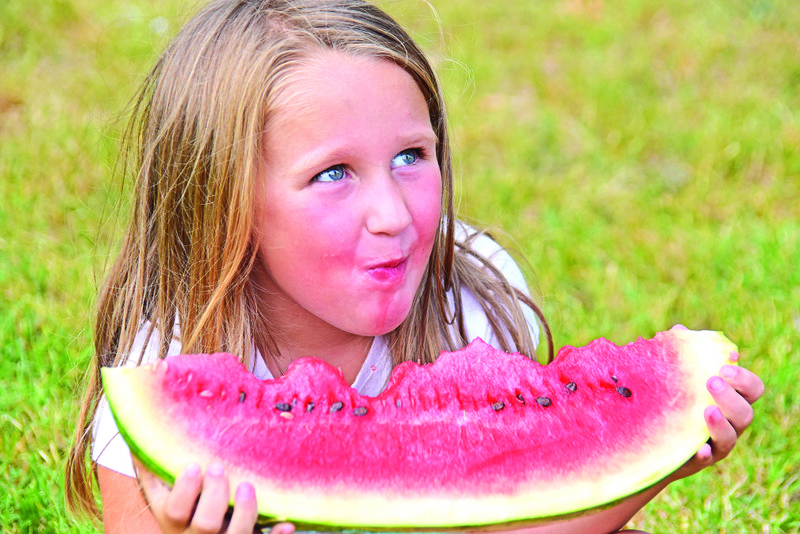 Snow Stephenson of Jonesboro takes a bite of her watermelon slice during the Free Watermelon Feast, part of the annual Cave City Watermelon Festival last year at Cave City Park.

CAVE CITY — The annual Cave City Watermelon Festival is like a homecoming for some and a chance make new friends and feast on city’s renowned melons for others.

The 40th occurrence of the celebration is set for Thursday through Saturday at the Cave City Park.

“We think it’s one of the best festivals in the state,” said Julie Johnson, festival committee chairwoman. “It was started in 1980. The chamber of commerce secretary said the town needed a festival. They had tried a spring festival. The two things that we’ve always been known for are the cave and watermelons. Since the cave was always privately held, we thought a watermelon festival had a better ring to it than a cave festival.”

The 1980 event was a one-day festival, which was attended by several politicians, including then Gov. Bill Clinton, who was in the middle of his first term in office.

“It was a big deal,” said Johnson, whose husband, Phillip, is a watermelon grower. “It had a big turnout. It was so well received that [almost]

The now three-day event is highlighted by some great musicians, Johnson said.

The Down East Boys will play at 8 p.m. Thursday. The group will be preceded by Charles Landers and the Gospel Hour Singers at 6 p.m. and the Flatland Gospel Band at 7 p.m.

On Friday, the headline act will be Grammy Award-winning group Shenandoah, who will take the stage at

8 p.m. Other performers include Erin Walters and Shannon Rounds at 6 p.m. and Rick Crawford and Triple Nickel at 7 p.m.

Also on Friday, there will be a kids fishing derby, set for 10 a.m. at the Cave City Park Pond. A watermelon speed-eating contest is set for 5:15 p.m.

On Saturday, Mark Chesnutt will be the headline act. He will start his set at 8:30 p.m.

Also on Saturday, the Melon Dash 5K will start at 7 a.m. The Kiwanis Club will host a pancake breakfast from 7-10 a.m. at First Baptist Church. Tickets are $5.

The Cave City Cruizers car show will begin at 9 a.m., with the watermelon parade starting at 10 a.m. Live music and other events include Luke Stroud and the 50s Beat at noon, Drasco at 1:30 p.m., watermelon-growers games at 3 p.m., a free watermelon feast at 4 p.m., a prize melon auction benefiting Arkansas Children’s Hospital at 5 p.m., Lauren Richmond performing at 5:45 p.m. and Dixon Street With Garrett Duncan taking the stage at 6:45 p.m.

All of the entertainment is free, Johnson said.

“We’ll have concessions and great food, from burgers to catfish to Mexican to Chinese. We have a wide assortment.”

Cave City Mayor Jonas Anderson said the festival is big for his town and the entire area.

“For us, the festival is extremely important,” he said. “It’s a huge part of our history. For a town of 1,800 people, it’s an enormous amount of people to come through here on those three days.”

Johnson estimates that between 12,000 and 15,000 people will attend this year’s festival.

“With Batesville being so close, we get calls for hotels and other things,” Anderson said. “It has a huge impact on the area in general.”

Johnson said the festival is like a big homecoming for those involved.

“We’re excited to have something go on for almost 40 years,” she said “We have class reunions and family reunions. People schedule vacations around the Watermelon Festival.”

And for it to last as long as it has, Johnson said, watermelons are a good bonding thing.

“So many people that you meet have a watermelon story,” she said. “They remember going to their grandpa’s or their uncle’s, and someone always had a watermelon. They just have good memories of watermelons.

“This festival is like a homecoming. You get to see old friends, make new ones and eat lots of watermelon. You get a chance to take a breath, relax and enjoy the time.”