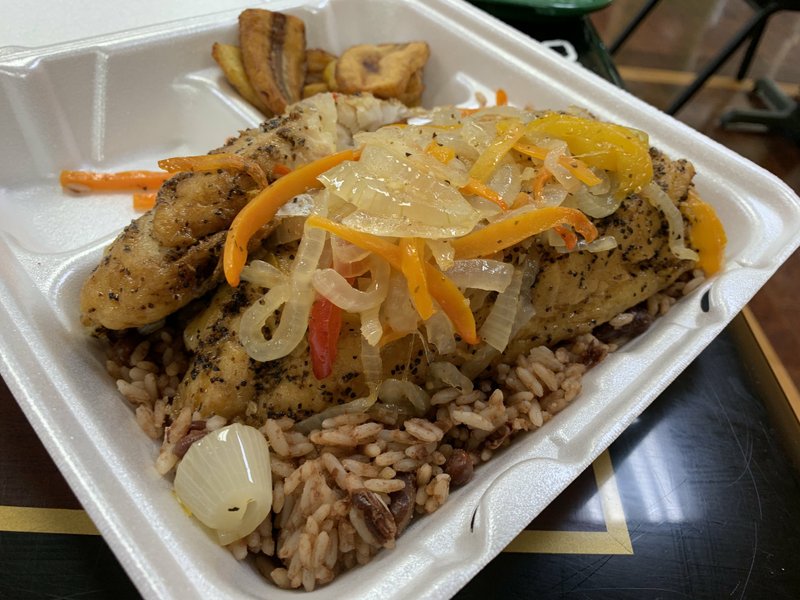 Snapper filets (served over rice and peas and with a side of fried plantains) are sometimes on the "line" at Taste of Jamaica on Little Rock's North Rodney Parham Road. Arkansas Democrat-Gazette/Eric E. Harrison

Jamaican cuisine has made brief appearances here and there across the central Arkansas foodscape — wasn't that long ago, for example, that Jerky's Spicy Chicken & More came, and went, in the 500 block of Center Street downtown.

Now we're on the cusp of having two Jamaican restaurants. Yeh Mon on Bowman Road has been experiencing a series of delays and we now expect it to open in mid-August — maybe. Those delays have allowed Taste of Jamaica, in the Sturbridge Center on North Rodney Parham Road, to get a head start on the competition.

Taste of Jamaica has one big advantage over its predecessors: the food is certifiably authentic. Owners Rose and Tony Walker come from Jamaica and previously operated a food truck called Grab a Bite. And the kitchen, where Tony Walker holds sway (Rose Walker is out front) doesn't have to split its attention with other kinds of cuisine.

The establishment operates out of a pair of strip-center storefronts; the dining room, enter on the right, is gaily done up in Jamaican colors, yellow, black and green (though the paint on the walls has a sort of pinkish-orangish undertone), accented by a Jamaican/American flag hybrid and a life-size-on-cloth portrait of Jamaican track superstar Usain Bolt.

The other half, awaiting a mixed-drink license, is set to become a bar with a stage space marked off for what will presumably be entertainment. (Decorating that area is a tapestry, also in the Jamaican national colors, festooned with images of marijuana leaves. Here today, ganja tomorrow, you might say.)

Taste of Jamaica does have a menu, but it appears to be a better guide for to-go orders. While you can get some items to order, the principal set-up for walk-in customers is a handful of items marked on a chalkboard, with counter service via a cafeteria-style line. You can pretty much always count on there being jerk chicken but the rest of the offerings vary from day to day.

Pick an entree and decide whether you want a large or small plate — small is about a buck cheaper in most cases — and whether you want white rice or rice and peas as a base. A staff member ladles the rice onto a foam plate or, more recently, into a foam container, then tops it with the entree out of the steam-tray pan and adds your choice of side item.

The container goes onto a plastic cafeteria tray with a plastic fork wrapped in a skimpy red cocktail napkin and you carry it to a booth or table. (Though it took us a while to find it, additional plastic silverware is available at the cash/credit card register.) Dine-in water and drinks come in hard red plastic glasses, except for the Jamaican Punch ($2.75), which came in a small paper cup with a plastic lid.

The establishment might be passing along what it saves in dishwashing costs to the customers. Taste of Jamaica, while not expensive, isn't cheap — large portions of entrees (including rice and peas and one side item per) average about $12. Dinner for two, including two large-plate entrees and two soft drinks, ran $35 with tip.

A large plate, however, certainly represents a large portion, so we felt like we got our money's worth, and everything we tried, we liked, even when we weren't thoroughly impressed. And there's one nice advantage to getting your eat-in food in a foam container: There's no trouble, fuss or difficulty about simply closing the lid and taking your leftovers home.

The staff did appear to expect that customers have a working knowledge of Jamaican food — one repeated several times that a snapper filet entree was that day's "saltfish," which didn't quite register on us until some time later when we did a little research. ("Ackee and saltfish" is a Jamaican staple.) But they do make it easy not to make mistakes by offering small samples via small plastic cups and toothpicks, a valuable service.

Speaking of the snapper, that'd be our primary recommendation if it's available on the line, and get it to order if it's not. Our large-plate entree ($16.49) consisted of two huge filets of firm white flash fish, surprisingly moist and touched up with a little pepper, topped with sauteed onions and red and yellow bell pepper strips. It was tasty indeed, even as cold leftovers.

We also enjoyed our Brown Stew Beef ($11.99 large, $10.99 small), which we ordered on the basis of a sample. It had a nice little cumulative, rear-taste-buds kick. The bite-size beef cubes were firm but not chewy.

We expected the Brown Stew Chicken ($10.99 large, $9.99 small) to be similarly spiced, but it wasn't — and would be a good choice if you're looking for something that isn't particularly fiery. We were advised in advance that the chicken comes on the bone, but in most cases it had been stewed to the point where even where it didn't fall off the bone, it came off fairly easily. However, some pieces were sufficiently small that we encountered small bones that were of some small difficulty to negotiate.

And we can also recommend the Jerk Chicken, which we experienced through a small plate ($10.49, $11.99 large) for lunch. There's enough jerk spice to tingle your tongue.

Large plates also provide a generous helping of the rice and peas — that's brown rice; the "peas" are much more like red beans. Other sides we liked: fried plantains and the steamed mixed vegetables that included broccoli, cauliflower, carrots and slices of a slightly sweet yellow vegetable we couldn't quite identify, but liked — could be butternut squash, as the server suggested (the mix comes pre-packaged and is heated up in the kitchen), or even possibly Jamaican yellow yam. Our "dumplings," however, turned out to be two lumps of dough closer perhaps to biscuits — chewy and, alas, by dinner time, slightly stale.

Until the liquor license takes effect, beverages are limited to soft drinks; we'd suggest avoiding the Jamaican Punch, which, while it did have some fruit and even possible coconut traces, was watery and unsatisfying.