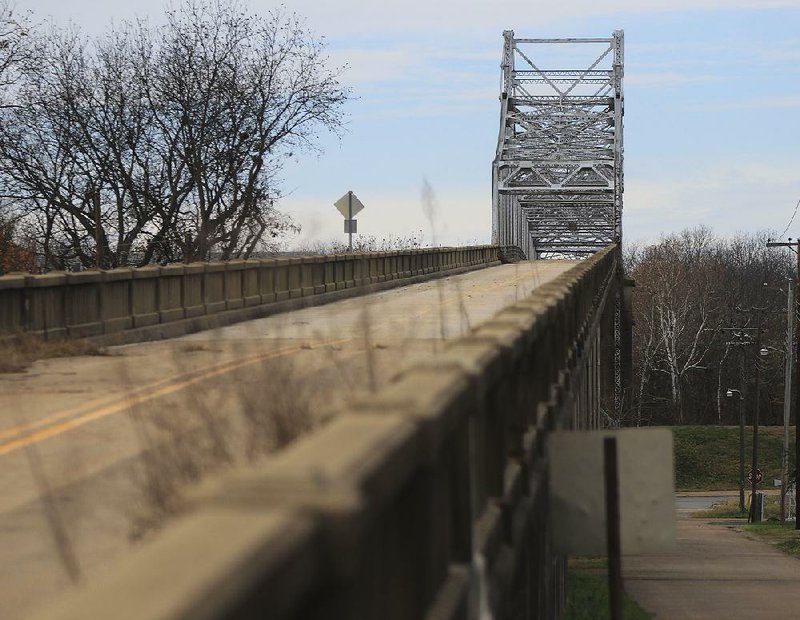 The old White River Bridge at Clarendon is shown in this file photo.

The U.S. Fish and Wildlife Service has declined to review its previous assessment of the historic U.S. 79 bridge at Clarendon, clearing the way for a contractor to begin demolishing the 88-year-old span next month.

The order to begin the removal appears to end a 6-year-old effort by boosters to preserve the bridge as a bicycle and pedestrian byway that they said would boost tourism for the surrounding region of east Arkansas.

Last month, the state Highway Commission voted to ask the federal agency to reconsider what is called a second compatibility determination of the bridge, a document that formed the basis for its removal.

The commission vote came after three state senators asked the commission to request the federal agency to "re-evaluate the Compatibility Determination to determine whether keeping the bridge under existing conditions would be consistent with refuge purposes."

The structure stands in the midst of the environmentally sensitive Cache and White River national wildlife refuges, which the U.S. Fish and Wildlife Service maintains.

A condition of the federal agency's approval of construction of a new U.S. 79 bridge was the removal of the old one, restoration of the area's topography and the re-establishment of native hardwood trees.

The nonprofit Friends of the Historic White River Bridge at Clarendon wanted the old bridge preserved and adapted for bicyclists and pedestrians as part of a planned bicycle route between Little Rock and Memphis and to foster tourism in the depressed area of the Arkansas Delta.

The Arkansas Supreme Court dismissed an appeal from the group on June 6 that would have blocked the state Department of Transportation from removing the old bridge.

The senators had argued that the first compatibility determination had expired and required under federal law a "fresh look."

But Keith Weaver, the Fish and Wildlife Service's project leader for the Central Arkansas National Wildlife Complex, which encompasses the area that includes the bridge, said the senators' interpretation of federal law was incorrect and, as such, the state Transportation Department is legally obligated to remove the old bridge and restore the natural topography and vegetation.

For supporters of the storied bridge, the finality stung.

"All I have is deep sadness," said Porter Briggs, a Little Rock business executive who is vice president of the group dedicated to saving the bridge. "It's such a loss aesthetically. Nobody cares about that."

He also said that because the bridge was the only singular asset in Monroe County and the surrounding area, it represents a loss of economic potential. Transformed as a pedestrian and bicycle bridge, it would have served as a magnet for long-distance cyclists and bring in tourism dollars, he said.

"There's nothing else out there," Briggs said.

The effort to save the bridge began in 2013, six years after the Fish and Wildlife Service reached an agreement with the state Transportation Department that in exchange for a new bridge, the old one would have to go.

One of the attractions that Briggs and other supporters put forward is the Cache River Wildlife Refuge.

The refuge, established in 1986 to protect significant wetland habitats and provide feeding and resting areas for migrating waterfowl, encompasses about 56,000 acres in Jackson, Woodruff, Monroe and Prairie counties. It is one of the few remaining areas in the Lower Mississippi River Valley unaltered by significant channelization and drainage, according to the service.

Bridge supporters say the natural beauty of the refuge would help attract tourists if the bridge was kept. But federal law requires that changes in the refuge cannot "materially interfere with or significantly detract from the purpose for which the refuge was established."

And the changes, such as the new bridge, have to be mitigated by, in this instance, removal of the old bridge.

The loss of the bridge represents a loss of history.

Opened to traffic in 1931, the double-span warren truss structure allowed travelers to cross the White River, without a ferry, on U.S. 79, or Military Road, which was the first "all-weather" road between Little Rock and Memphis.

The bridge was one of three similar designs by Ira G. Hedrick, an engineer who studied at the University of Arkansas, Fayetteville. One of the two other bridges, at Augusta, already has been dismantled. The last at Newport likely will be dismantled as well, Briggs said.

Briggs and other supporters enlisted lawmakers, Gov. Asa Hutchinson and his administration, and members of the congressional delegation -- and turned to the courts -- in their efforts to save the bridge, all to no avail.

He praised the Highway Commission for trying one last time to ask the Fish and Wildlife Service to reconsider.

"What else can we say?" Briggs said. "We've done everything we could. We went down every trail. But it's over now."

"The contractor will begin mobilizing, erecting signs, etc. that week," Straessle said. "The current plan is to begin work Aug. 12." 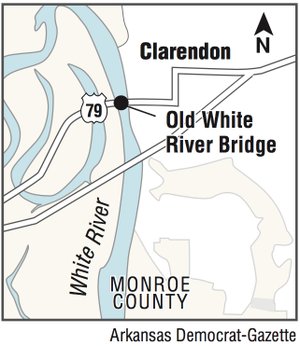 A map showing the location of the Old White River Bridge