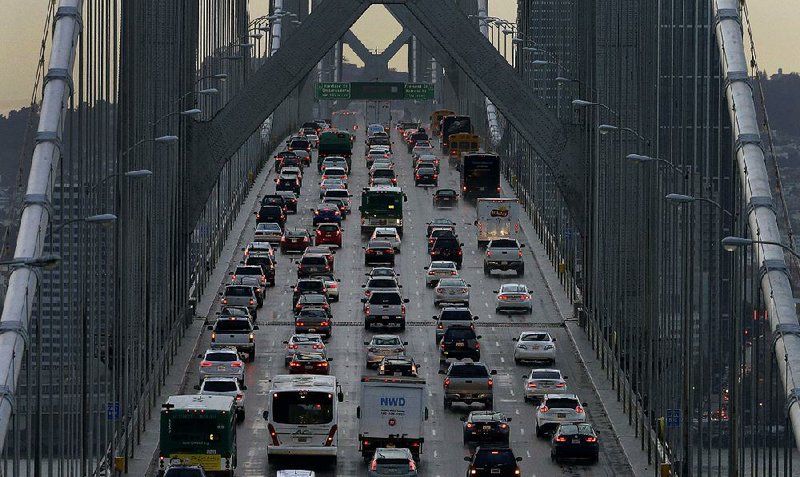 Vehicles cross the Bay Bridge toward San Francisco from Oakland in this December 2015 photo. Four major automakers have reached an agreement with California to cut engine emissions despite U.S. government plans to pare industry regulations designed to reduce automobile pollution.

WASHINGTON -- Four of the world's largest automakers have struck a deal with California to reduce automobile emissions, siding with the state in its fight with President Donald Trump over one of his most consequential regulatory rollbacks.

In coming weeks, the Trump administration is expected to all but eliminate a regulation set out during President Barack Obama's tenure that's designed to reduce vehicle emissions that contribute to global warming. California and 13 other states have vowed to keep enforcing the stricter rules, potentially splitting the United States auto market in two.

With car companies facing the prospect of having to build two lineups of vehicles, they opened talks with California regulators in which the automakers -- Ford Motor Co., Volkswagen of America, Honda and BMW -- won slightly less restrictive rules that they can apply to vehicles sold nationwide.

The agreement provides "much-needed regulatory certainty," the companies said in a joint statement, while enabling them to "meet both federal and state requirements with a single national fleet, avoiding a patchwork of regulations."

The automakers also agreed to recognize California's authority to set its own standards, which are followed by at least a dozen other states, and they will not challenge the state's authority, according to the statement.

Trump administration officials said the California deal would not stop their plans to put forward a new federal rule to allow more tailpipe pollution. The deal "has no impact on EPA's regulation of greenhouse gas emissions under the Clean Air Act," Michael Abboud, an EPA spokesman, wrote in an email. "This voluntary framework is a PR stunt that does nothing to further the one national standard that will provide certainty and relief for American consumers."

Under the agreement, the four automakers, which together make up about 30% of the U.S. auto market, would face a slightly looser standard than the original Obama rule: Instead of reaching an average 54.5 mpg by 2025, they would be required to hit about 51 mpg by 2026.

The Trump administration has said it plans to roll back the Obama-era standard to about 37 mpg.

The National Highway Traffic Safety Administration, which draws up federal standards with the EPA, said the government continues to work on a final fuel-economy rule that will apply to all automakers. The administration's proposals do not prevent any automaker from designing and building highly fuel-efficient vehicles, the agency said in a statement.

Although California won the backing of the four companies in its showdown with the federal government, the Trump administration is still expected to try to revoke California's right to set its own auto-emissions standards. The state has vowed to fight that effort all the way to the Supreme Court if necessary, and the four automakers, by siding with California, are in effect voting that they expect California to win that battle.

The new agreement also would give automakers more leeway in meeting the fuel-economy standards through other means.

Automakers could get advanced technology credits such as those for hydrogen fuel cell, plug-in gas-electric hybrids, and battery-electric vehicles. And they would get credits for devices that aren't counted in EPA test cycles such as stopping the engine at red lights and restarting it quickly when the driver wants to go. The process would be streamlined to get credits approved for new technologies.

On Thursday, Gov. Gavin Newsom of California said he was "very confident" that more automakers would join the deal in coming days.

One auto executive familiar with the negotiations agreed that was likely.

On Thursday morning, a wider group of automakers held a meeting to consider joining the pact, the executive said, although there were no immediate sign-ons. Ford, Honda, BMW and Volkswagen initially decided to keep the group small, he said, because a wider group would have been more difficult to bring together, raising the prospect that word would get out and the deal would collapse.

An executive at another large automaker said his company was considering joining the agreement because it included meaningful concessions by California. The executive, who spoke on the condition that neither he nor his company be identified, said the Obama-era fuel economy standards were difficult for the industry to meet because car buyers increasingly prefer sport utility vehicles and pickups that tend to have much lower fuel economy than sedans.

Margo Oge, a former senior Environmental Protection Agency official who worked on auto-emissions policy and now serves as an informal adviser to several auto companies, said, "I have been calling all these companies and telling them to cut a deal with California. I think GM and Toyota will also have the courage to sign on."

Some environmental groups criticized the slower pace and expanded loopholes the deal awarded the automakers. "That means more pollution, less savings at the pump and a bad precedent for future standards," said Daniel Becker, director of the Safe Climate Campaign at the Center for Auto Safety, a nonprofit group in Washington.

The carmakers are addressing a crisis that is partly of their own making. Soon after Trump was elected, the chief executives of the three Detroit automakers -- Ford, General Motors and Fiat Chrysler -- met with Trump in the Oval Office and asked him to loosen the Obama emissions rules. But the automakers have since grown alarmed at the expanding scope of the administration's plan.

The gasoline refining industry, which would benefit from continued gasoline sales, lobbied hard for a rollback alongside groups that deny the science of climate change. One of those groups called automakers the "opposition" in policy debates over fuel economy and urged the Trump administration to stay its course.

In June, Canada, which has historically followed U.S. federal auto-pollution rules, signed a clean-car deal with California in what was seen as a step toward formally adopting the state's standards.

Describing the deal with automakers, Daniel Lashof, U.S. director of the World Resources Institute, a research organization, said: "This shows that state leadership is indispensable. That's where the leadership is coming from right now in the U.S. on climate."

Last month, 17 automakers sent a letter to Trump telling him that his plan to weaken tailpipe-pollution standards threatened to cut their profits and produce "untenable" instability in a crucial manufacturing sector. In particular, automakers said they feared a situation in which they would be forced to sell different kinds of cars in different states and be subject to fines and litigation if consumers crossed state lines to buy gas-guzzling SUVs that were legal in some states but not others.

In response, a White House spokesman put the blame on California, saying the state "failed to put forward a productive alternative."

After that letter, several auto companies approached California officials asking if they could work together on a separate deal. "It became clear very quickly that following up on that letter and the lack of response from the administration that they were ready to sit down with us," said Mary Nichols, California's top clean air official.

Information for this article was contributed by Coral Davenport and Hiroko Tabuchi of The New York Times and by Tom Krisher and Ellen Knickmeyer of The Associated Press.