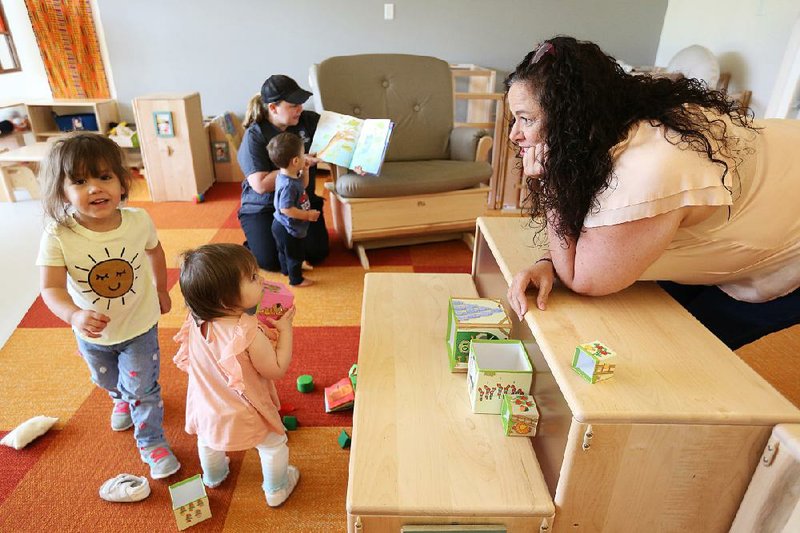 Sunny Lane, director of development at the Helen Walton Children’s Enrichment Center in Bentonville, visits with students Thursday in a preschool classroom.

BENTONVILLE -- A toxin-free environment, ample natural light and lots of indoor and outdoor space to play are some of the hallmarks of the new home of the Helen Walton Children's Enrichment Center.

The nonprofit center provides care and education for 240 children ranging from 6 weeks to 5 years old. It's combined with the HighQ Ed Center -- formerly known as the Early Childhood Initiative Center -- which opened in 2009 to provide resources and training for other early childhood education programs in the region.

Miranda Honsinger has taught at the center for six years. Her 2-year-old son is enrolled there as well. Both are happy with the new facility.

"I love this place. My son loves it a whole bunch," Honsinger said. "The thing I love most is that he can go out to the patio whenever he wants, because he's a very outdoorsy kind of kid."

Each of the center's 21 classrooms connect to large, age-appropriate outdoor spaces. Classrooms also have screened-in patios where children can be indoors but still get some fresh air.

The project was chosen for the Walton Family Foundation's Northwest Arkansas Design Excellence Program, which aims to elevate the quality of architectural and landscape design in the region. LTL Architects designed the building in collaboration with Scape Landscape Architects, both New York City-based firms.

The main entrance leads to a wide-open gathering space. There are four wings, called neighborhoods, that contain the classrooms, each of which is named after a particular kind of tree. The entrance to each classroom resembles the front of a house.

Trees are an obvious theme on campus. Besides the real ones in the outdoor play areas, tree-like poles form the perimeter of the project and provide the structure for the protective enclosure around the outdoor areas. Inside, above the reception area, there's a simple sculpture made to look like branches that hold green plates inscribed with the names of center donors.

Central to the construction plan was a commitment to eliminate six classes of toxins deemed especially harmful to children. That goal was accomplished with the help of the Parsons School of Design's Healthy Materials Lab. Toys and other materials in the classrooms also are non-toxic, said Sunny Lane, the center's director of development.

According to a "Healthy Project Guide" produced by LTL Architects and the Healthy Materials Lab, many building materials degrade over time. Indoor paint and carpets can emit volatile organic compounds, and some construction components can burn or rust, releasing chemical byproducts. Materials used in plumbing can leach into improperly treated water.

Children may absorb these toxins through respiration, ingestion, and oils in their skin and hair follicles. This exposure comes at a time when their cognitive and physical development is at a crucial stage, according to the guide.

The hope is that other early education programs will see what the center has done and be inspired to adopt similar approaches with their own buildings, Lane said.

"They may not be building a new facility," Lane said. "But maybe they're replacing their carpet next year. We can show them carpets that don't have toxic fibers, and this is the glue your contractors can use, and help them create those spaces and environments that are healthy for children."

Michelle Barnes, the center's director, said the entire building project was everything she envisioned, and then some.

"It exceeded expectation, truly, in so many ways," Barnes said. "I think being part of the Design Excellence program really did elevate the quality of the construction project. It's super exciting."

The new building has three more classrooms than the old one. Twelve are continuity classrooms, a new concept for the center that puts children under 3 years old in the same room together.

Children in continuity rooms benefit not only from having the same teacher for several years but also from interacting with kids of different ages, Lane said.

The benefits of continuity classrooms show up in different ways. Lane talked about one 2-year-old girl who had a habit of waking up quite cranky from her naps. One day, she woke up from a nap to discover one of the babies in her classroom sitting nearby.

"Instead of going into bear mode, she reached her arms out toward the baby. It just changed the dynamic of that whole afternoon," Lane said.

Julie Wilson, enrollment coordinator, was helping out inside one of the continuity rooms Thursday morning, spoon-feeding a baby girl. The youngest in the room was 10 months old, and the oldest was about 21/2 years old, she said.

"It's building more of that family cohort," Wilson said. "They learn to take care of each other."

Asked to compare the new building to the old one, Wilson said, "There is no comparison. It's wonderful. Having the natural playscapes, the porches where they have direct access to the outdoors, has been just wonderful."

The center needs to raise about $500,000 more to complete its fundraising campaign for the new building, according to Lane.

The full cost of tuition is $335 per week. The center charges on a sliding scale depending on a family's income. Nearly half of the children enrolled are receiving some kind of tuition assistance, Lane said.

The center lists 42 teachers on its website -- about one teacher for every 5.7 kids enrolled -- though Lane said the center is hiring additional teachers.

The Bentonville School District plans to move about 80 of its prekindergarten students into the Wildcat Way building formerly occupied by the center. The district also will move its special education, English as a second language, district nurse and social worker offices to that building. 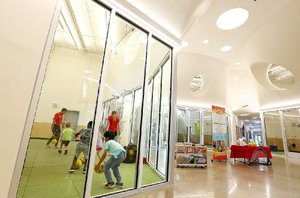