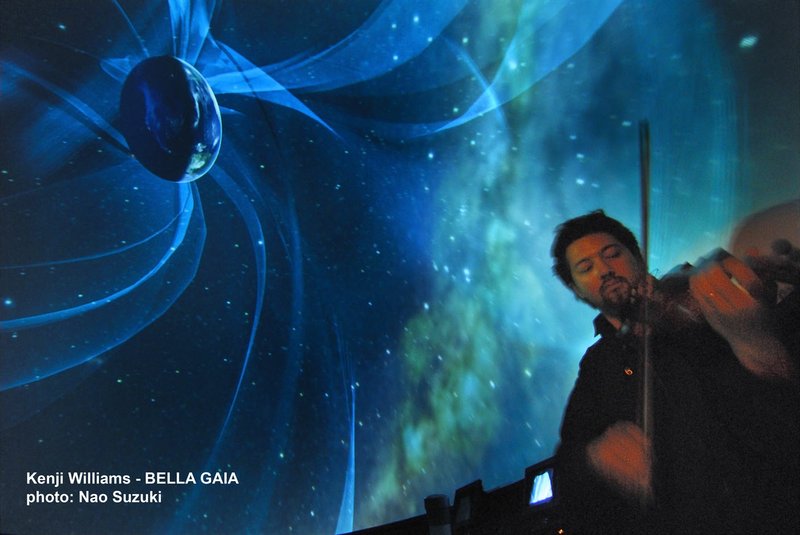 Photo courtesy Nao Suzuki Walton Arts Center public relations director Jennifer Wilson describes "Bella Gaia" as "the quintessential Artosphere experience." The show's integration of science, art and the environment to inspire awe and reverence for the planet does make it the perfect fit for the 10th anniversary of the festival that was created to celebrate and bring awareness to sustainability and the natural world through art.

When composer and musician Kenji Williams found himself at a meeting with astronaut Mike Fincke, he asked the man who had just returned from living on the International Space Station: "What changed when you went to space?"

"And he told me how he had this completely life-changing experience, looking out the window of the Space Station for the very first time and seeing our planet -- with an atmosphere just 20 miles thick, this borderless bubble of life floating in the blackness of space," Williams remembers. "And he came back to Earth with a much greater appreciation for our home planet that sustains us."

That answer got Williams thinking about how he could bring that transformative experience to the rest of us who don't get to travel to space. How could he re-create the Overview Effect -- the profound, somewhat indescribable, emotional change in awareness many astronauts experience looking down on our planet?

What he landed on, and what continued to evolve as the world changed over the last 10 years, is "Bella Gaia (Beautiful Earth)" -- a performance that blends music and dance with NASA-powered visualizations of the Earth. Imagery created from NASA's scientific data reflects elements of the natural world like ocean currents, global temperatures and ice flow. But it also examines humanity's relationship with the environment in showing things like population growth, ship traffic and oil consumption in engaging and three-dimensional visuals.

"The visual is sort of the main attraction, but the journey and the emotion of the show is driven by the music," Williams shares. "Music is very powerful in inducing an immersive audio-visual experience."

That journey allows viewers to appreciate the world from above, but it also takes them to countries all over the globe in celebration and contemplation.

"There's a whole cultural element where we dive into different countries and celebrate the art, the culture, the dance, the music from different places on Earth, and we explore the relationship between human culture and the natural world," Williams adds.

Native artist Rulan Tangen is the founding director of Dancing Earth, an Indigenous Peoples contemporary dance collective, and once said to What's Up! in an interview, "Many times, art is a harbinger of what comes into consciousness. People think of music and dance as a response to culture but often, they create the moment in culture."

Unintentionally, "Bella Gaia" came to manifest that concept as three of the four locations Williams highlighted in the show at its inception would go on to experience some of their regions' most significant ordeals of modern times. Japan's Fukushima Daiichi nuclear disaster, Egypt's Arab Spring protests and New York's living through Hurricane Sandy all led to Williams making changes in the show to reflect what was happening in the world in real time.

"My goal is really to inspire and transform through inspiration," Williams says. "There are scary things in the show, which I think is important, but the overall message is positive, of hope and of celebrating the beauty of humanity.

"I mean, that's part of the reason we visit these countries and see this beautiful dance or music, is that humanity has beauty, and we have a creative role in the universe. We're not just cancerous parasites. I do think humanity has a role to play in the evolution of the universe. And we are at a difficult point in the evolution of our species where it is an existential moment for us. So we need to be reminded of this moment, but also of the beauty amid the peril."

A Poetic Vision of Earth from Space’

WHERE — Walton Arts Center in Fayetteville

VIDEO — Bella Gaia creator and director Kenji Williams insists the best way to get a feel for the show ahead of the performance is to see the video. Visit the online version of this story at nwadg.com/whatsup to watch.

You can also donate directly to the United Way’s flood relief efforts by texting flood2019 (all one word) to 91999.