Nearly three decades after a legal settlement was reached to increase the number of black judges in Arkansas, a group of civil-rights advocates and attorneys filed a federal lawsuit this week alleging discrimination in the state's system of electing appellate court judges.

The suit claims that the lack of black judges on the bench of the Arkansas Supreme Court -- there are none -- and the Court of Appeals -- where one of the 12 judges is black -- is the result of a division of at-large, single-member and multimember judicial districts that violates the federal Voting Rights Act of 1965 by "illegally diluting the voting strength of Black voters in Arkansas."

Backed by attorneys for the NAACP Legal Defense and Education Fund, as well as firms in Little Rock and Washington, D.C., the plaintiffs include former Circuit Judge Marion Humphrey; civil-rights-advocate-turned-prosecutor Olly Neal; Ryan Davis, the director of the University of Arkansas at Little Rock's Children International; and the nonprofit Christian Ministerial Alliance of Little Rock.

Together, the group is suing the state of Arkansas and the members of the Board of Apportionment, which includes the governor, secretary of state and attorney general. The suit seeks to force the creation of a majority-minority district for the Supreme Court and two for the Court of Appeals. 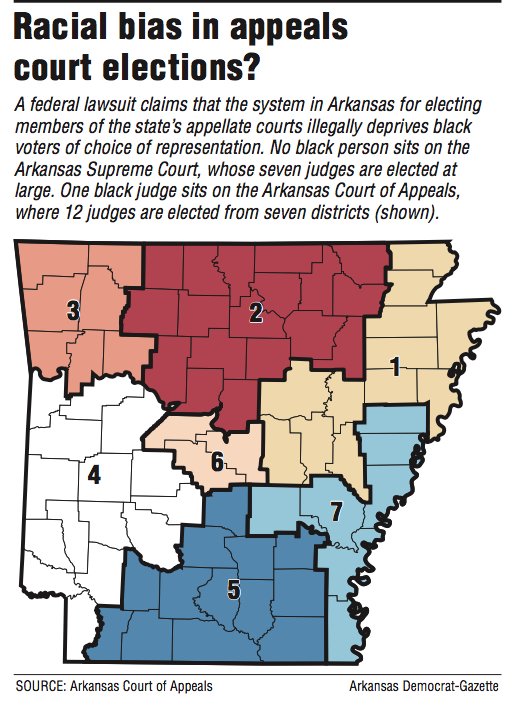 On Monday, the case was assigned to U.S. District Court Judge James Moody Jr. of the Eastern District of Arkansas.

Arkansas' seven Supreme Court justices are elected statewide to eight-year terms. No black person has ever been elected to the high court, although some were appointed to serve as justices.

The Court of Appeals, meanwhile, is divided into seven districts, four of which elect two members. The only black judge on that court, Waymond Brown, is elected by the single-member 7th District, which the lawsuit claims is 49% black. According to the U.S. census, the black population in Arkansas is just over 15%.

"The methods for electing the Supreme Court and Court of Appeals employ practices and procedures, such as at-large and multimember districts, majority-vote requirements, numbered places, and staggered terms, that enhance the opportunity for racial discrimination because Black-preferred candidates, with cohesive Black voter support, cannot win a majority of the total vote without white crossover voting, which does not occur at meaningful levels in Arkansas elections," the complaint states.

The argument echoes a similar complaint made in 1989 by another group of plaintiffs that also included Neal and the Christian Ministerial Alliance against the state's then-system of electing trial court judges.

After two years, that lawsuit eventually resulted in a settlement, known as the Hunt decree for the case's main plaintiff, which saw the establishment of majority-minority "sub-districts" within five judicial circuits in central and eastern Arkansas.

Arkie Byrd, an attorney who worked on both the Hunt case and the lawsuit filed this week, could not be reached for comment Tuesday at her Little Rock offices. Attorneys for the NAACP similarly did not respond to requests for comment.

In a statement Tuesday afternoon, a spokesman said Attorney General Leslie Rutledge is "reviewing the complaint and considering next steps."

Spokesmen for Gov. Asa Hutchinson and Secretary of State John Thurston did not return requests for comment.

The Arkansas Judicial Council, which had previously scheduled a meeting for today, will likely discuss the lawsuit, said council President John Fogleman, who otherwise declined to comment.

Joshua Silverstein, a law professor at the University of Arkansas at Little Rock's William H. Bowen School of Law, said the case will likely rely on past arguments made about discrimination in multimember districts, such as those used to elect Court of Appeals judges.

The number of cases challenging statewide elections is comparatively lacking, Silverstein said, but not unheard of.

The Alabama state chapter of the NAACP filed a lawsuit in 2016 alleging that the statewide election of appellate judges amounted to racial discrimination, as all 19 members of the Alabama's three appellate courts are white. That case is pending before a U.S. district judge in Montgomery.

The complaint of the Arkansas lawsuit makes several references to races run by Pulaski County Circuit Judge Wendell Griffen, who made unsuccessful bids for the state Supreme Court in 2004 and 2006.

Griffen, who is black, served for 12 years on the Court of Appeals before being defeated for re-election in 2008 by Judge Rita Gruber, who is white. Griffen has also been known for his outspokenness, especially on the issues of race and the death penalty.

Griffen, however, is not a party to the lawsuit.