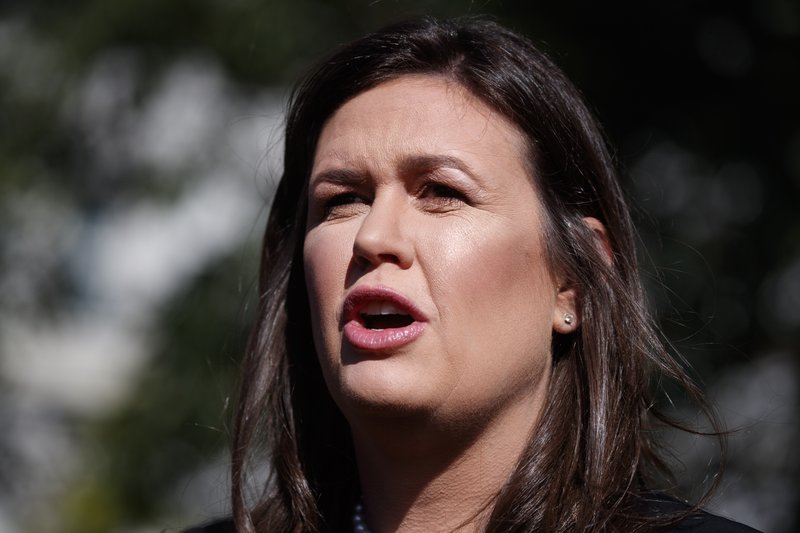 In this June 11, 2019, photo, White House press secretary Sarah Sanders talks with reporters outside the White House in Washington. President Donald Trump announced on June 13, Sanders is leaving her job as press secretary at the end of June. (AP Photo/Evan Vucci)

WASHINGTON — White House press secretary Sarah Sanders, whose tenure was marked by a breakdown in regular press briefings and questions about the administration's credibility, as well as her own, will leave her post at the end of the month, President Donald Trump announced Thursday.

Sanders is one of Trump's closest and most trusted White House aides and one of the few remaining on staff who worked on his campaign.

"After 3 1/2 years, our wonderful Sarah Huckabee Sanders will be leaving the White House at the end of the month and going home to the Great State of Arkansas," Trump tweeted just before she accompanied him to a White House event on prison reform.

Trump suggested her as a future candidate for Arkansas governor. "She would be fantastic."

Under Sanders' tenure, regular White House press briefings became a relic of the past. She has not held a formal briefing since March 11. Reporters often catch her on the White House driveway after she is interviewed by Fox News Channel and other TV news outlets.

Her credibility has also come under question.

Special counsel Robert Mueller's Russia report revealed that Sanders admitted to investigators that she had made an unfounded claim about "countless" FBI agents reaching out to express support for Trump's decision to fire FBI Director James Comey in May 2017.