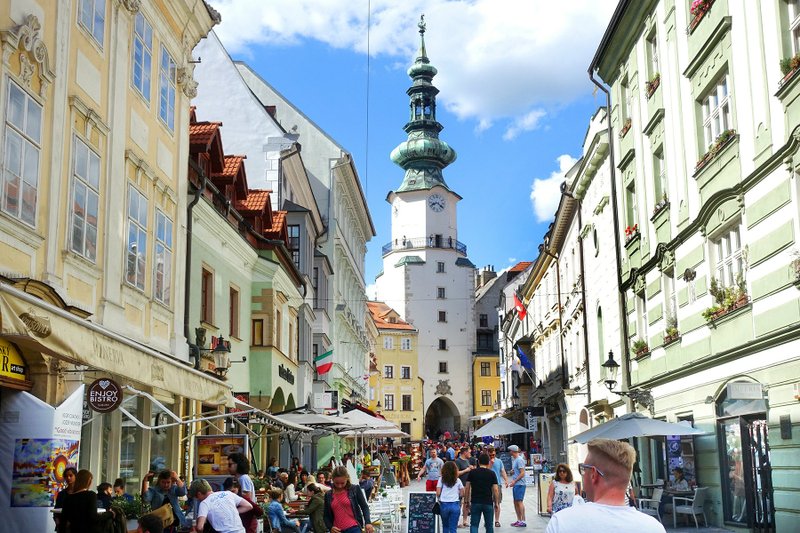 Bratislava’s old town has come a long way since it was nearly a ghost town in the Communist era. Photo by Rick Steves via Rick Steves' Europe

Bratislava, the capital of Slovakia and once a nearly desolate ghost town, is one of the big surprises of my recent travels. Its compact old town bursts with colorfully restored facades, lively outdoor cafes and swanky boutiques. The ramshackle industrial quarter to the east is rapidly being redeveloped into a forest of skyscrapers. The hilltop castle gleams from a recent face-lift. Even the glum communist-era suburb of Petrzalka has undergone a Technicolor makeover. It's arguably the fastest-changing city in Europe.

Sitting quietly in the very center of central Europe, wedged between bigger and stronger nations (Hungary, Austria, the Czech Republic and Poland), Slovakia was brutally disfigured by the communists, then overshadowed by the Czechs. But in recent years, this fledgling republic has found its wings. Locals brag that the region around Bratislava has the hottest economy and highest per-capita income of any region in the former Communist bloc.

Bratislava has also forged a twin-city alliance for trade and commerce with Vienna — which is less than an hour's train ride away and whose lights you can sometimes see from here — making this truly the nexus of central Europe.

Many Bratislavans fancy themselves the yang to Vienna's yin: If Vienna is a staid, elderly aristocrat sipping coffee, then Bratislava is a vivacious young professional jet-setting around Europe. Bratislava at night is a lively place, thanks in part to tens of thousands of university students.

Though lacking blockbuster sights (you could easily have a great day here without paying a single admission fee), Bratislava is made for strolling. If you have just a few hours to spend, head straight to the old town and wander its mostly traffic-free streets, finishing with one or more of the city's fine viewpoints: Ascend to the "UFO" observation deck atop a funky bridge or hike up to the castle for the views. With more time, stroll along the Danube riverbank to the thriving, modern Eurovea development — essentially a riverside park with luxury condos and a modern shopping mall. Enjoying a drink in one of its chic outdoor lounges, you'll get a glimpse of where Slovakia is heading. 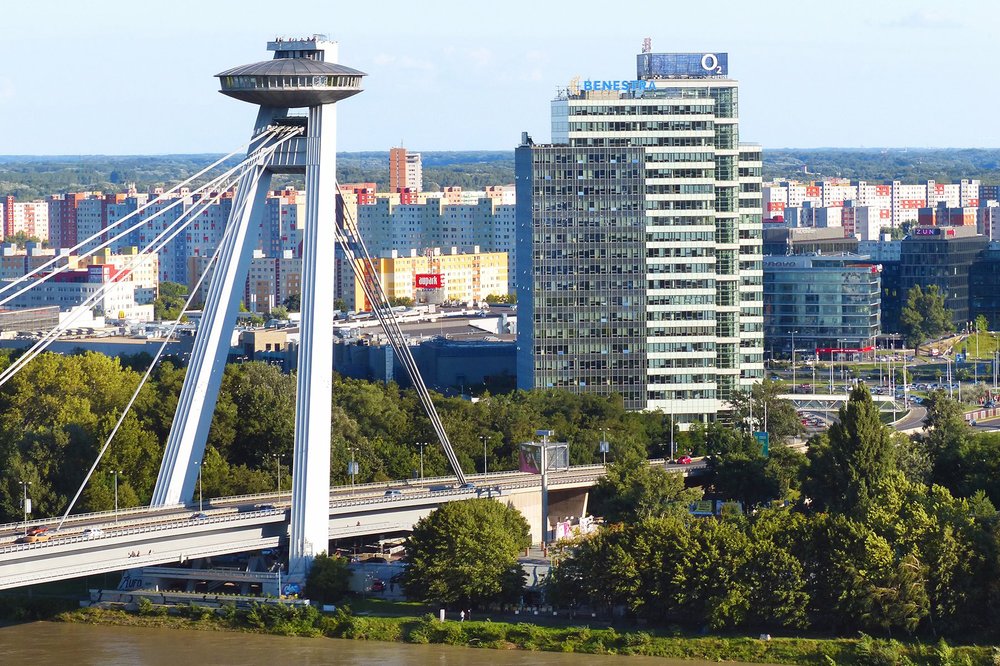 From the end of World War II until the fall of communism in 1989, Bratislava was a damaged husk. The communist regime had no respect for the town's heritage, selling off the old town's medieval cobblestones to cute German towns rebuilding after the war. Locals avoided this stripped-down, desolate corner of the city, preferring to spend time in the Petrzalka suburb across the river.

With the collapse of the communist regime, the new government began returning buildings to their original owners and, over time, the city made the old town traffic-free, spruced up public buildings and encouraged private owners to restore their buildings. In the last decade, life has returned with a vengeance and Bratislava's old-town charm is on full display.

Most visitors first encounter this charm via St. Michael's Gate, which is topped by the last surviving tower of the medieval city walls. It leads to the delightful Michalska Street, a symbol of how far the city has come. The town's modest main square, Hlavne Namestie, feels too petite for a national capital. Its style is a mishmash — every building around it seems to date from a different architectural period. Elsewhere in the old town, you'll find the Old Market Hall dating to 1910, now a busy community center that hosts concerts and a Saturday market. Laurinska Street is Bratislava's fashion drag, lined with fun-to-browse boutiques. Look out for the many whimsical statues that dot the old town. Most date from the late 1990s, when city leaders wanted to entice locals back into the newly prettied-up and fun-loving center.

The imposing Bratislava Castle is the city's most prominent landmark. Habsburg Empress Maria Theresa transformed the castle in the 18th century from a military fortress to a royal residence. Big and iconic as it is, frankly it's dull up close. The exhibits inside are not too exciting. Still, it's almost obligatory to head up for the views. A recent renovation has breathed life into the castle, which is surrounded by a delightful public park.

Spanning the nearby river is the huge flying-saucer-capped SNP Bridge, the communists' pride and joy. ("SNP" is shorthand for the 1944 Slovak National Uprising against the Nazis, a common focus of communist remembrance.) Locals aren't crazy about this structure — not only for the questionable Starship Enterprise design, but also because of the oppressive regime it represented. However, it has been reclaimed by capitalists, and the restaurant and observation deck have been renovated into a posh eatery called "UFO."

Bratislava used to leave me cold. But changes over the last two decades have transformed it into a delightful destination. Bratislava's energy is inspiring.