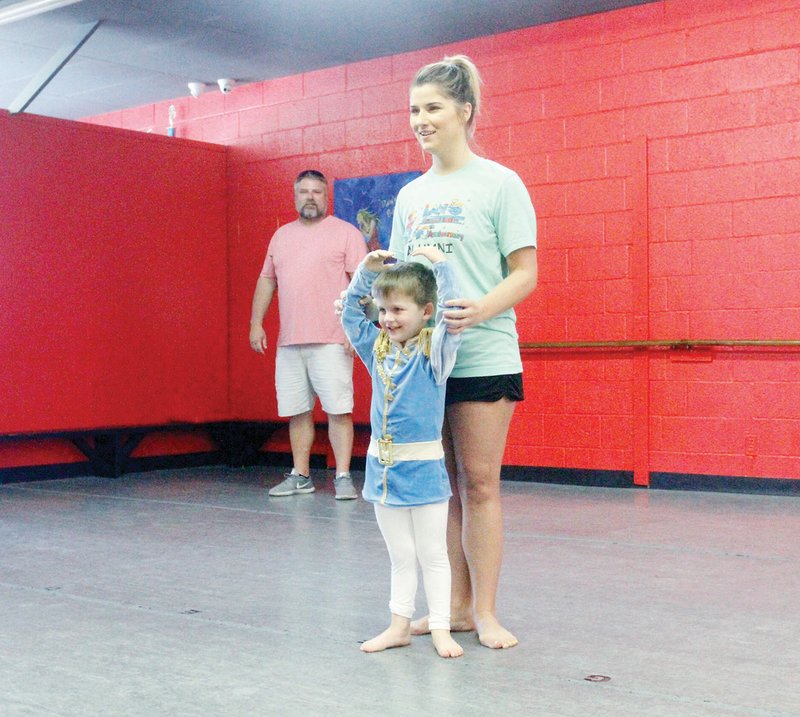 Duane Peckat, back, watches his daughter, Madison, work with his grandson Andy Eason at Lana’s Dance Studio. Peckat said he hasn’t missed a dance competition or recital since his children and grandchildren started dancing. ( Mark Buffalo)

LONOKE — Being a dance dad was something new to Duane Peckat of Lonoke when his daughter Madison starting taking dance as a young girl.

“At first, I thought it was just her being a little girl. … She’ll do it for a couple of years and be out of it,” Peckat said. “Just like her older brothers, I had to show some interest in her deal. That led me to getting involved, building props and being at recalls, practices and parents’ nights, watching for endless hours in the living room with her showing me dance after dance after dance. It just builds on you through the years, and you learn to appreciate Lana’s Dance Studio, especially Lana Grober. She’s like a second mother to Madison.”

Peckat, who is a 1989 graduate of North Little Rock Northeast High School, served five years in the Marines. While serving, he met his wife, Margie, who had three sons. They were married in 1996. He worked as a police officer for the Lonoke Police Department for several years, then worked 10 years at Building Bridges, formerly Lonoke Exceptional School, before becoming maintenance and operations director for the Lonoke School District two years ago.

With his sons, Joseph, Jacob and Jordan Eason, he got into what they were doing at the time to support them.

“It was a challenge for me,” he said. “Joseph enjoyed music and being in the band and choir. I’m an athletic guy. I had to find a different side of me to actually be involved in his stuff and be interested in doing that.

“Jacob was more of a skateboarding guy. I never rode a skateboard, so I had to learn to ride one. Jordan was my athletic kid, as far as baseball and football. Then along came Madison, and coming from the athletic background, I thought, ‘She’ll be the next professional softball player in our family.’”

“We turned to dance,” Duane Peckat said. “From dance, it went from 14 years of dance to a scholarship at the University of Arkansas at Little Rock, to dancing on their dance team. She teaches dance now. It was always a challenge for me and Margie to be at everybody’s deal. But when you love your kids, you make time for all of them.”

While Madison is the youngest, she got started in dance before her brother Jordan.

“His was a fluke-type deal,” Duane said. “He was having bad arthritis in his hips. The very first time we went to the doctor, he pulled out a very large needle and stuck it in Jordan’s hip and removed a bunch of fluid. He was in excruciating pain.”

“The doctor said, ‘If you get involved in some sort of physical activity where you are constantly stretching and moving, the pain should subside and go away, as long as you are active,” Duane Peckat said.

Jordan Eason started in tumbling, then moved into dance.

“The more he figured it out from a guy’s perspective, he was around all these good-looking girls,” Peckat said. “It just clicked in his mind that if he got involved, he’d be with those girls. This is how the dancing took over.

“Then I had two dancing, which meant more props, more places to go.”

Madison said her dad has always been supportive of her dancing.

“He was always there at every single competition and recital,” she said. “Sometimes, he’s backstage, carrying on my props, but he’s usually out in the audience. He’s always pushed me to do my absolute best, and I’m so thankful for all the hard work and support he’s given me over the years.

“Many long hours have been put in by my father, and I’m just blessed to have such a supportive dance dad.”

Peckat said he would get nervous watching his children dance.

“Honestly, I had never watched Jordan or Madison onstage,” he said. “I always watch them from the lobby because it always makes me nervous. I’m not nervous for them. I’m nervous for me. I want them to do the best they can do. I’ve seen where they work so hard. I’ve comforted Madison lots of times when she’s come off the stage, bawling her eyes out because she thought she could do a whole lot better. I know she can. You only get three minutes to prove it.

“But it makes you very proud to see all the hard work they do throughout the year.”

“I think it was meant to be,” Duane Peckat said. “With grandchildren, it was just a no-brainer that you’d see them at the dance studio, and I’m still watching from the back. It’s just a nervous thing. My wife thinks I’m crazy.”

Grober said it’s important for fathers to be involved at the studio with their children.

“We are fortunate to have a studio with a lot of great dance dads,” she said. “They can make or break their student’s interest in dance. When a dance dad takes the time to watch new skills at home and show excitement, it motivates a dancer like nothing else.”

Grober said Peckat is one of those dads.

“He encouraged his daughter Madison, even when she came to dance and cried nonstop initially,” she said. “As she got more and more involved, I got tickled because Duane would know the names of the steps better than Madison.”

Grober said Peckat will be a great dance grandfather as well.

“I think that’s where he will shine the most,” she said. “I’ve never seen him more proud of Andy and Jayelyn.”