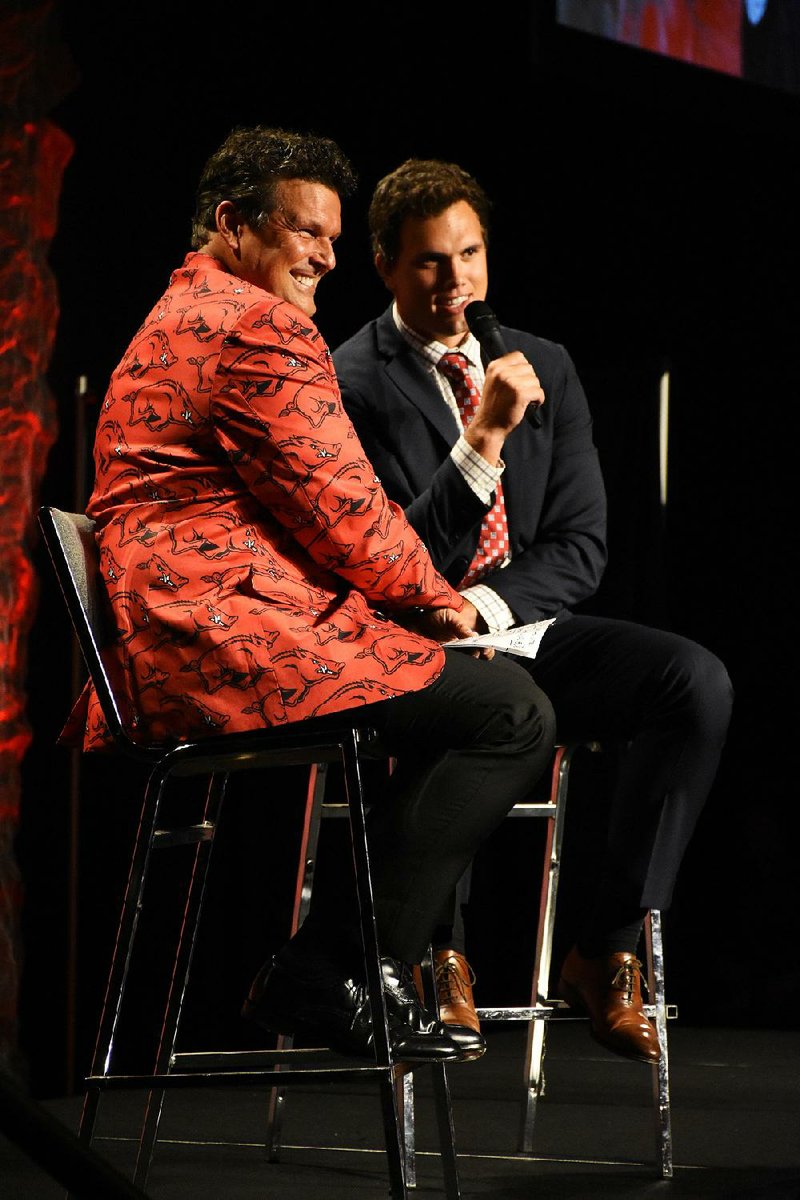 Keynote speaker Hunter Henry of the Los Angeles Chargers, who played at the University of Arkansas and Pulaski Academy, answers a question from KABZ-FM host David Bazzel on Saturday during a question-and-answer session at the Arkansas Democrat-Gazette All-Arkansas Preps banquet, which was held at the Statehouse Convention Center. See more photos at arkansasonline.com/616arkpreps

In the seventh year of the Arkansas Democrat-Gazette All-Arkansas Preps award banquet, an Arkansan was the main speaker for the first time.

Los Angeles Chargers tight end Hunter Henry, who played at Pulaski Academy in Little Rock and the University of Arkansas in Fayetteville, spoke Saturday at the Statehouse Convention Center in Little Rock.

Henry was the latest high-profile sports figure to speak at the banquet, joining pro football's Drew Brees, Peyton Manning and Emmitt Smith, baseball's Cal Ripken Jr., track and field's Jackie Joyner-Kersee and ESPN college basketball analyst Dick Vitale. He is the first banquet speaker to have been named to the All-Arkansas Preps team, as he was selected to the 2012 football team in his senior season at Pulaski Academy.

When asked by former Arkansas linebacker and current KABZ-FM radio host David Bazzel if he felt any pressure to speak at the same banquet that Brees, Manning and Smith have, Henry said no.

Henry's father Mark was an offensive lineman at Arkansas in 1987-91 and his younger brothers Hayden (linebacker) and Hudson (tight end) are currently with the Razorbacks.

The then-San Diego Chargers selected Henry in the second round of the 2016 NFL Draft. Henry played one season in San Diego before the Chargers moved to Los Angeles in 2017.

But in May 2018, Henry tore his ACL in the Chargers' first organized team activity. He missed all of the regular season, but was declared active for the team's AFC divisional playoff game at New England.

The knee injury was Henry's first major setback, which he said he never wishes on anybody.

"It was the hardest thing I've been through in my life," Henry said. "There's a lot of tears, a lot of pain.

"It was a long year. I've never had something where you can't just tape it up. It wasn't anything too crazy. But I'm feeling great now. I'm very excited about the season."

Henry got married on June 30th to Parker Schmidley of Fort Smith.

"This past year, I had a lot of time with her," Henry joked.

Henry was asked by Bazzel to compare the speed of the game from college to the NFL. He was complimentary of the SEC.

"The SEC is that high of a caliber," Henry said. "There's that many good athletes in the SEC. It was pretty similar. I was going up against good guys on Saturdays."

With high school athletes in attendance, Henry wanted to pass on a lesson from his father, which was toughness.

"My dad is an offensive lineman," Henry said. "Toughness takes you a long way, not just in football but in life. Being tough will get you through things."

Members of the 2018-19 All-Arkansas Preps teams were chosen by Democrat-Gazette staff members, with nominations from the state's coaches. More than 400 athletes were honored in 12 different sports.