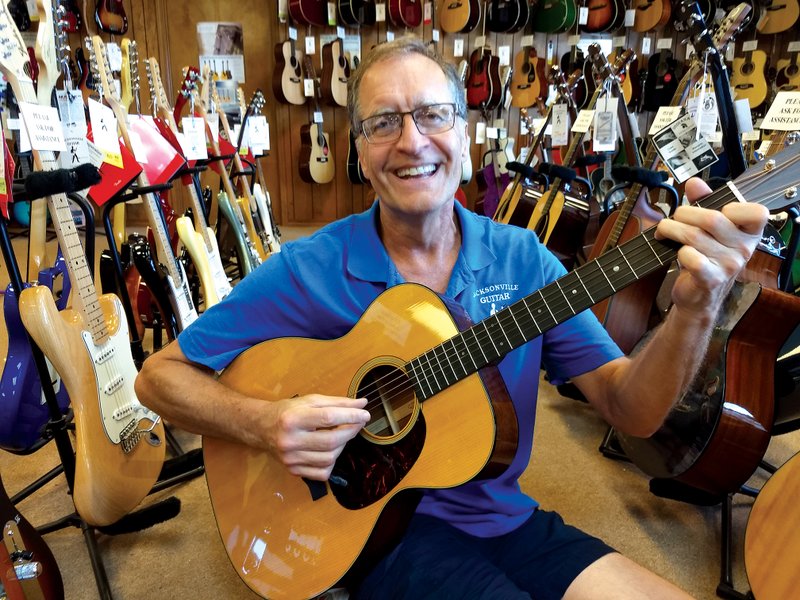 Holding his favorite acoustic guitar, Jacksonville Guitar Center owner Steve Evans tells stories of his 40-plus years in the retail music business. He’s set to sell his store, which includes his guitar museum, and retire later this year. ( Daniel Bartel )

“All my customers are my friends,” Evans said. “I think, if I’m leaving the shop, am I going to lose my friends?”

But those who know Steve, 63, and his natural fondness for people could conclude that he’ll do just fine making new friends wherever he goes.

After decades of guitars to handle, store bills to pay, building maintenance to manage and customers to make happy, Evans said he’s ready to exit the stage as store owner. His decision to retire was made through an agreement with his wife, Pam.

“She always told me she wanted to pass away first so she didn’t have to deal with all these guitars and store things,” he said.

The particulars of how his inventory and store building will be handled are among several questions that occupy Evan’s thoughts these days. Chief among them is, who will be his successor? As of now, a serious unnamed buyer has shown interest enough to take steps toward getting a down payment on a loan, but no promises have been made.

Steve said he’s fairly certain the store will be taken over in a matter of months. Should a deal to sell the store not materialize anytime this year, Evans said, he will still retire in January 2020, the same month he opened the store 45 years ago.

Through the years, Evans’ attentiveness to customer needs have won him sincere adoration and loyalty. A person who buys a guitar from Evans is likely to return several times a year for other needs, such as guitar picks, strings, tuning knobs, guitar tuners, stands, straps — there’s a vast assortment of support materials to purchase at the store.

And all those customer needs create a lot of repeat business, which to any proprietor means big rewards.

Evans understood this repeat-customer model almost innately, growing up in Jacksonville. Solid Sound guitar shop hired him in 1974 when he was 18. After several months, the shop owner decided to move out of state and shut down the shop.

This created an opportunity. Evans’ plan to attend the University of Central Arkansas in Conway was halted by his father, who suggested that Evans forgo college and buy the shop because there was no guitar shop in Jacksonville, Evans said. With his dad’s help, Evans opened the Jacksonville Guitar Center in 1975 on Dupree Drive in the Mini Center.

“My dad made a terrific sign to go up on the roof,” Evans said, in a 2015 issue of Nightflying magazine. “He built a 4-by-13-foot guitar. He cut out small strips of aluminum and nailed them in place to replicate the frets and inlays, and he used baby food jars for the four control knobs. … I was really surprised how great it turned out.”

Eleven years later, Evans and his staff moved to their current location on Burman Drive, four times as large as the previous location.

The square footage at the newer location offers enough space to feature a guitar museum, which includes many vintage and rare guitars.

The collection includes a 1940s guitar autographed by Gene Autry and a children’s Elvis guitar from the 1960s. Several featured guitars depict Western iconographic images such as a cowboy on horseback lassoing a calf.

Many of the guitars on display have been photographed for guitar history books. Evans even wrote a book on cowboy guitars that was published in 2002.

Inside a display case, there’s a violin that dates back to the 1870s. The museum has even drawn out-of-state visitors who have come to see all these eye-catching collectibles.

Another point of interest is the center’s band photo collection, which adorns the store walls. Evans always asks customers to bring an 8-by-10-inch photo of their band that he frames and hangs up, which has created a large collection itself, he said.

All collectibles in the museum and otherwise will stay with the center, if permitted by the new buyer, Evans said.

Evans is a well-known guitarist among customers and friends, but his true calling was to run a music store.

While Evans said he didn’t excel in school, he was good about doing things he was supposed to do, such as paying bills and taking care of other sundry details.

“There’s a lot of details to manage in running a music store,” he said. “I was always good at taking care of all the details, while still managing to have fun.”

When the store changes hands later, most of his staff members are expected to venture off to pursue their own projects. However, a part-time employee at the center hopes to stay on: Caroline Horton, the center’s current guitar teacher/instructor.

Horton, who was recommended by her guitar teacher, needed no introduction to Evans when she was hired. Her father and Evans played in bands together. So when Evans contacted her about a job, she already knew what her answer would be.

“When Mr. Steve called and gave me this opportunity, I had to take it,” the 17-year-old said.

Horton said she has learned a lot about how to teach by being under Evans’ supervision. Under his mentorship, she said, she has learned how to personalize lessons for each student, and Evans has helped her like no other boss has.

“Steve is someone you want in your life, to have a conversation with or for advice,” she said. “He’s just a customer-oriented person who knows how to make people feel special. For instance, I made a paper guitar for him when I was younger, and he hung it up in his shop. I felt like the biggest rock star when he did that. It meant the world to me. He cares about everyone.”