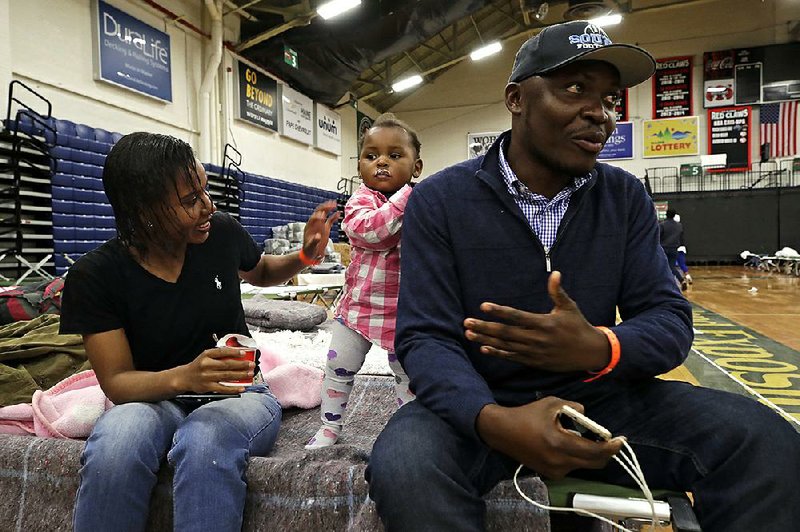 Prince Pombo, shown Thursday with wife Thaiz Neri and their daughter, Heaven, said he chose Portland, Maine, as his family’s new home after finding the city through an Internet search. Pom- bo was a teacher in the Democratic Republic of Congo before coming to the U.S.

Men, women and children are flying across the Atlantic Ocean to South America and then embarking on a monthslong overland journey. They are arriving at the border and at two cities more than 2,100 miles apart -- San Antonio and Portland, Maine.

Federal officials have been dropping off many of the migrants in San Antonio and busing others to Portland. The city in Maine, with a population of about 67,000, already has a large Congolese community, and Somali refugees were resettled there in the 1990s.

Portland has turned its 3,000-seat basketball arena into an emergency shelter for about 200 African migrants and depleted assistance funds meant for other groups. Officials there and in San Antonio have had to reassure the public that fears of an Ebola outbreak were unfounded.

In one recent week, agents in the Border Patrol's Del Rio sector stopped more than 500 African migrants found walking in separate groups along the arid land after splashing across the Rio Grande, children in tow.

That is more than double the total of 211 African migrants who were detained by the Border Patrol along the entire 2,000-mile U.S.-Mexico border in fiscal 2018. In the 10 fiscal years before that, a total of 25 migrants from the Democratic Republic of Congo and Angola were arrested and taken into custody in the Border Patrol's nine sectors on the southern border, according to agency data.

Raul Ortiz, head of the U.S. Border Patrol's Del Rio sector, called the apprehension of so many migrants from Africa "an anomaly that we have not experienced before."

"We do know there are some more in the pipeline," Ortiz said. "We're going to prepare as if we should expect more."

On a recent Saturday in Tijuana, there were 90 Cameroonians lined up to get on a waiting list to request asylum that has swelled to about 7,500 names. Cameroonians generally fly to Ecuador in South America because no visa is required. From there, they travel by bus and on foot through Colombia, Panama, Costa Rica, Nicaragua, Honduras, Guatemala and Mexico, taking about four months to reach Tijuana.

Also on the waiting list at the border are Ethiopians, Eritreans, Mauritanians and Sudanese.

More migrants are on the way. In the Gulf coast state of Veracruz, Mexican authorities said late Saturday that they intercepted four trucks packed with nearly 791 people of various nationalities.

Mexico is on pace to triple the number of African migrants it is processing this year, up from 2,100 in 2017.

Mbi Deric Ambi, from the English-speaking part of Cameroon, is among them. In a recent interview in the southern Mexican city of Tapachula, Ambi said he was waiting for a document from the Mexican authorities that would allow him to proceed north to the United States. He is among the Cameroonians who traveled overland from Ecuador through South and Central America.

Human Rights Watch says 1,800 people have been killed and half a million have fled their homes in the Anglophone regions of Cameroon since late 2016. A United Nations official says 4.3 million people need humanitarian assistance.

"We don't have jobs in the English part, the educational system is poor, they are looking at us as dogs," Ambi said as a crowd of migrants jostled outside an immigration center in Tapachula, waiting for their names to be called to collect their travel document. Ambi has been waiting every morning for six weeks.

"We just have to be patient, because there is nothing we can do," he said.

The surge in migration to the United States from sub-Saharan Africa coincides with a steep drop in the migration flow across the Mediterranean to Europe after European countries and two main embarkation points -- Turkey and Libya -- decided to crack down. From Jan. 1 to June 12, only 24,600 migrants arrived in Europe by sea, compared with 99,600 over the same period in 2017, according to the International Organization for Migration.

But Joel Millman, a spokesman for the organization, doubts that the migrant path for Africans has swung over from Europe to America.

Prince Pombo, 26, said he simply learned about the chance of a new life in Portland after finding the city on an Internet search and asking around. Pombo, who was a teacher in the Democratic Republic of Congo, said his next step is to start rebuilding a life for himself and his family.

Portland officials tweeted Thursday that the migrants are in the United States legally because they are asylum seekers. The city has built a reputation as a place friendly to asylum seekers, even creating the government-financed Portland Community Support Fund to provide rental payments and other forms of assistance for such migrants.

The mayor of Portland, Ethan Strimling, said the city welcomed African migrants, and a donation campaign for them had raised more than $20,000 in its first 36 hours.

"I don't consider it a crisis, in the sense that it is going to be detrimental to our city," Strimling said. "We're not building walls. We're not trying to stop people. In Maine, and Portland in particular, we've been built on the backs of immigrants for 200 years, and this is just the current wave that's arriving."

In San Antonio, the interim assistant city manager said the city would figure out a way to get the Africans the services and transportation they needed. Colleen Bridger said the city and nonprofit groups have already spent more than $600,000 in direct expenditures in recent months on Central American and African migrant assistance.

"It's not an option for us to say to people newly arrived in the United States that they're not our problem and that they're welcome to sleep on the park bench until they find enough money to buy food and bus tickets for their children," Bridger said. "That's just not who San Antonio is."

Information for this article was contributed by Andrew Selsky, Patrick Whittle, Elliot Spagat, Maria Verza and staff members of The Associated Press; and by Manny Fernandez of The New York Times.