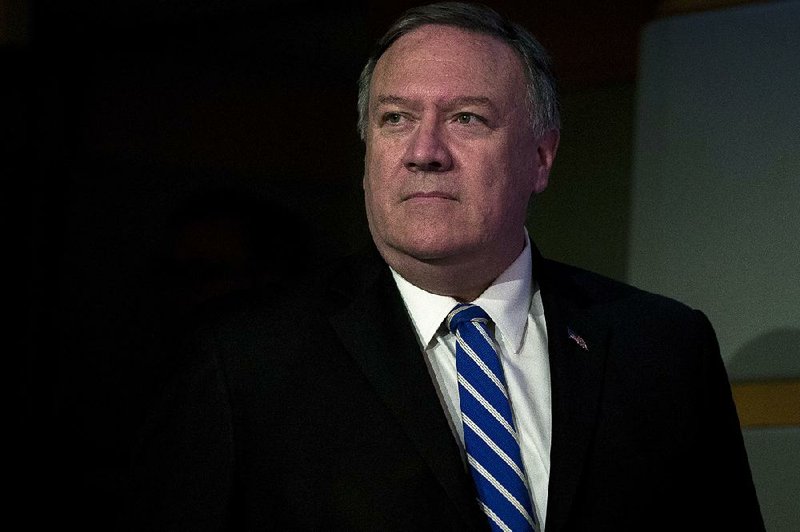 WASHINGTON -- There's "no doubt" Iran was responsible for attacks Thursday on two oil tankers near the Strait of Hormuz, Secretary of State Mike Pompeo said Sunday, adding that more proof will be released soon.

"The intelligence community has lots of data, lots of evidence," Pompeo said on Fox News Sunday. "The world will come to see much of it, but the American people should rest assured we have high confidence with respect to who conducted these attacks as well as half a dozen other attacks throughout the world over the past 40 days."

Japan and Germany have requested stronger evidence than the grainy video released by the Pentagon. U.S. officials say the video shows an Iranian patrol boat removing an unexploded mine from one of the ships.

"I made a bunch of phone calls yesterday. I'll make a whole bunch more calls today. The world needs to unite," Pompeo said, though he did not say what action a united world should take.

"We are going to work to build out a set of countries that have deep vested interest in keeping that strait open to help us do that," Pompeo said.

Iran has denied being involved in the attacks and accused America of promoting an "Iranophobic" campaign against it.

Pompeo dismissed a suggestion from Face the Nation host Margaret Brennan that the U.S. conclusion was under question. Brennan countered that German Foreign Minister Heiko Maas requested more information because the video was "not enough."

"The German foreign minister has seen a great deal more than just that video," Pompeo replied. "He will continue to see more."

However, the Japanese government is also unconvinced. Japanese media reports that Tokyo has asked Washington for concrete evidence to back its conclusion that Iran is responsible.

"The U.S. explanation has not helped us go beyond speculation," a senior government official told Japan Today.

Pompeo said some countries "just wish this would go away." But he called it a fundamental right of every country to travel through the international waters of the Strait of Hormuz, which he said Iran is attempting to deny.

"I am confident that as we continue to develop the fact pattern, countries around the world will not only accept the basic facts, which I think are indisputable, but will come to understand that this is an important mission for the world," he said.

Pompeo stressed that the U.S. gets relatively little of its energy supplies through the strait, which lies between the Persian Gulf and the Gulf of Oman. The U.S. Energy Information Administration says 16 percent of U.S. petroleum imports came from the Persian Gulf countries in 2018.

By contrast, about 80% of oil through the shipping passage supplies energy-hungry countries in Asia, including China, Japan, India and South Korea. Those countries have skin in the game, he said.

"I'm confident that when they see the risk -- the risk of their own economies and their own people and outrageous behavior of the Islamic Republic of Iran, they will join us in this," Pompeo said.

For U.S. Sen. Tom Cotton, that mission for the world includes an attack on Iran.

Cotton said President Donald Trump has the authorization to defend American interests, saying even critics of the administration would have to support a military strike because "it would be in keeping with what President [Barack] Obama did unwisely in Libya in 2011 in launching a weekslong campaign to overthrow the government there."

"What I'm talking about is not like what we've seen in Iraq for the last 16 years or Afghanistan for the last 18 years," he said. "But retaliatory military strikes against Iran that make it clear we will not tolerate any kind of attacks on commercial shipping on the open seas."

Cotton said the difference between the run-up to war in Iraq and the current tensions with Iran were in the difficulty of assessing Iraq's program of weapons of mass destruction.

"There's really not much to assess right here," he said. "Everybody can see with their own two eyes, those Iranian sailors going up to a ship and taking a mine off of it. ... They tried to shoot down one of our surveillance aircrafts over the Persian Gulf as we were simply trying to monitor what had happened there."

The Republican from Dardanelle said that because Iran is struggling under U.S. sanctions, the country is hoping that attacks on oil tankers will drive up the price of the oil it sells, as well as compel other countries to push for easing of sanctions.

"That's not going to happen," he said. "If anything, we need to increase that pressure, and I think this unprovoked attack on commercial shipping warrants retaliatory military strikes."

Trump last year withdrew the U.S. from an international agreement, signed by Obama in 2015, to limit Iran's nuclear program. Trump has reinstated economic sanctions and recently ended waivers that allowed some countries to continue buying Iranian oil. That has deprived Iran of oil income and has coincided with what U.S. officials said was a surge in intelligence pointing to Iranian preparations for attacks against U.S. forces and interests in the Gulf region.

The U.S. has accelerated the deployment of the USS Abraham Lincoln aircraft carrier battle group to the region, sent four nuclear-capable B-52 bombers to Qatar and bolstered its defenses in the region by deploying more Patriot air defense systems.

Rep. Adam Schiff, D-Calif., who heads the House Intelligence Committee, said on CBS that the U.S. is struggling to persuade its allies to join in a response against Iran, and "it shows just how isolated the United States has become."

Some European allies have called for a careful investigation of responsibility, worried that Trump is escalating tensions with a country he has long called a top U.S. enemy.

Similar demands for "credible" proof have been made by a senior European Union foreign policy adviser and by Jeremy Corbyn, who is a leading member of Britain's Parliament in the opposition Labor Party.

The video cited by Pompeo backs the U.S. assertion that Iran used limpet mines to target the tankers on Thursday. But the Japanese tanker's crew members appeared to contradict the assertion, as they describe "flying objects" as having targeted the vessel.

Schiff, however, called the evidence against Iran "very strong and compelling," calling it a "class A screw-up" by the Middle East nation.

The Saudi and British governments also agreed that the grainy U.S. video seemed to point to Iran, with the Saudi crown prince, Mohammed bin Salman, calling on the international community to take a "decisive stance" against what he called Iranian expansionism.

In his first public comments regarding the attacks, the powerful Saudi prince, who is also defense minister and oversees all major levers of power in the country, said the incident "confirms the importance of our demands of the international community to take a decisive stance" against Iran's behavior.

"The kingdom does not seek war in the region," the prince said, speaking with the Arabic-language newspaper Asharq al-Awsat. "But we will not hesitate to deal with any threat to our people, sovereignty and vital interests."

Pompeo, later asked on Fox News Sunday about Trump's decision to push ahead with $8 billion in arms sales to Saudi Arabia despite congressional opposition, said the sale "made enormous sense."

Elsewhere, Schiff expressed concern about the influence of Pompeo and national security adviser John Bolton, both longtime hawks on Iran.

Schiff argued that Trump wants to avoid war in the Middle East but said "his people, and I don't know whether [that] is Pompeo or Bolton or both, seem to be taking actions to undercut that ambition to stay out of war."

Information for this article was contributed by Carol Morello, Kareem Fahim, Simon Denyer, Elise Viebeck and Felicia Sonmez of The Washington Post; by Aya Batrawy and Ellen Knickmeyer of The Associated Press; and by Mark Niquette, Shawn Donnan and Kevin Varley of Bloomberg News. 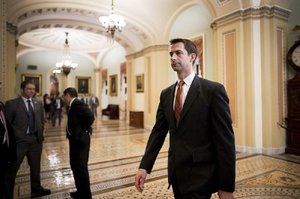