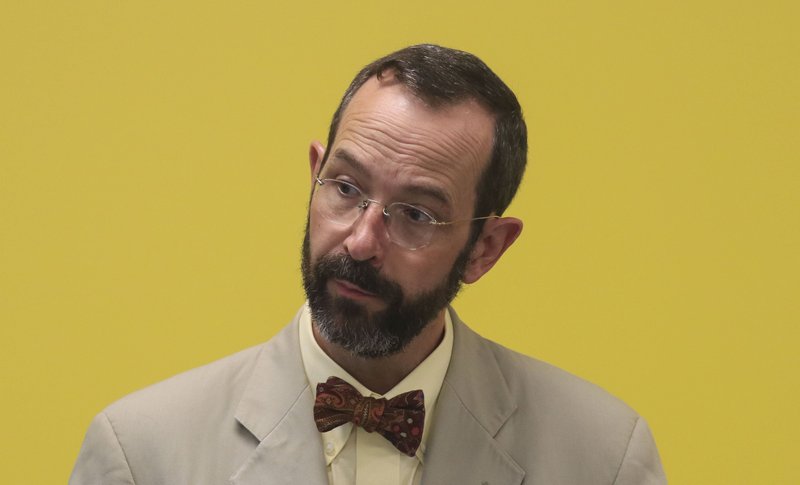 A Fort Smith couple has filed an amended federal lawsuit against the city of Walnut Ridge after a judge dismissed their initial complaint, saying the police chief had "qualified immunity" when his department deleted the plaintiffs' posts from its Facebook page.

U.S. District Judge D. Price Marshall Jr. ruled that former Walnut Ridge Police Chief Chris Kirksey didn't violate the defendants' First Amendment rights when he, or someone in his department, repeatedly deleted a post and video link from the department's Facebook page that showed one of Kirksey's officers aggressively handling a motorist he stopped in December 2016.

The judge left the door open for the defendants to file an amended complaint against the city, which they did on Friday's deadline.

The original lawsuit was filed Aug. 8 in federal court in Fort Smith by Kesha M. Chiappinelli of Zaffino Law Firm's Bentonville office on behalf of William Whitfield Hyman and Natalie Hyman of Fort Smith. It was later transferred to federal court in Arkansas' Eastern District.

The original defendants were the city of Walnut Ridge, through Mayor Charles Snapp in his official capacity, and Kirksey in his individual capacity.

On April 18, 2018, Whitfield Hyman posted a message on the Walnut Ridge Police Department's Facebook page: "Could you please arrest this officer for assault, battery, false imprisonment and kidnapping?"

The post included a link to body-camera video of officer Matthew Mercado's arrest of Adam Finley of Smithville.

The post was deleted, so Whitfield Hyman posted a second link to the body-camera video, this time in the comments section of a Police Department post about a grant program. Whitfield Hyman's second post was also deleted, according to court filings.

Then his wife, Natalie Hyman, posted a link to the video in the comments section under a Police Department post about vandalism. Her post also was deleted. A week later, the city deactivated the Facebook page, according to court documents.

Last April, Walnut Ridge reached a settlement in a separate federal court case regarding the traffic stop. The city and Arkansas Municipal League agreed to pay Finley a total of $57,500.

Mercado committed "unlawful assaults and batteries" on Finley by cursing, threatening and shoving him, according to that complaint. That was in addition to false arrest and imprisonment, according to the suit.

Mercado and Kirksey have left the Walnut Ridge Police Department.

In the Hyman case, lawyers for Walnut Ridge argued that the Facebook page was "government speech," which would shield it from First Amendment "scrutiny," according to Marshall's order.

"Parts of the Walnut Ridge Police Department's Facebook page probably were government speech, in particular the department's posts," he wrote. "But the interactive portion of the page was different. That part of the page allowed people to express opinions."

"Just as the First Amendment has been held to protect television, radio and other developments in technology, online speech which includes comments posted and shared through Facebook must be protected from government infringement under the First Amendment," the Hymans argued in their initial lawsuit.

Marshall wrote that Kirksey was entitled to qualified immunity against the Hymans' First Amendment claims.

"Qualified immunity shields state actors from civil liability unless they violate a 'clearly established statutory or constitutional right of which a reasonable person would have known,'" wrote Marshall.

Governing law wasn't clear enough for Kirksey to face a lawsuit for his actions, according to the judge.

"The law is still percolating," Marshall wrote. "The court therefore cannot hold that the Hymans' right to be heard on the [Police] Department's Facebook page was clearly established in the spring of 2018. No binding precedent notified Chief Kirksey that selectively deleting citizens' posts from the interactive part of a Facebook page that invited public commentary clearly violated the First Amendment. The Hymans' federal and echoing state law claims against him fail as matter of law."

But the Hymans might be able to proceed against the city of Walnut Ridge, wrote Marshall.

"As pleaded, there's no solid claim against the city," Marshall wrote. "In response to the motion to dismiss, however, the Hymans attached a screen shot of a post by Chief Kirksey which mentions a Walnut Ridge policy. The post says: 'Before commenting on any post, please read our privacy policy. We will not allow comments that are negative and could likely start a feud. Keep it clean or your post will be deleted and you will be banned from this page.'"

Marshall noted that the city's policy wasn't mentioned in the Hymans' original complaint.

"The city's policy may or may not violate the U.S. Constitution or the Arkansas Constitution," Marshall wrote.

An amended complaint was filed Friday on behalf of the Hymans by Chiappinelli and two attorneys with the Institute for Constitutional Advocacy and Protection at Georgetown University Law Center.

They named the city of Walnut Ridge as sole defendant.

That amounts to "viewpoint discrimination," according to the amended complaint.

The policy made clear that the Police Department wouldn't tolerate "any objectionable entry," according to the amended complaint.

"To that end, the policy declared that the Police Department 'will remove as soon as feasible any posting that involves,' among other criteria, any posting 'that, by its nature or content, might harm public welfare,'" according to the filing.

Among other things, the Hymans seek a declaratory judgment that the Facebook page and city policy violated the First Amendment to the U.S. Constitution and the Arkansas Constitution.