Thousands without power a day after storms tear through state 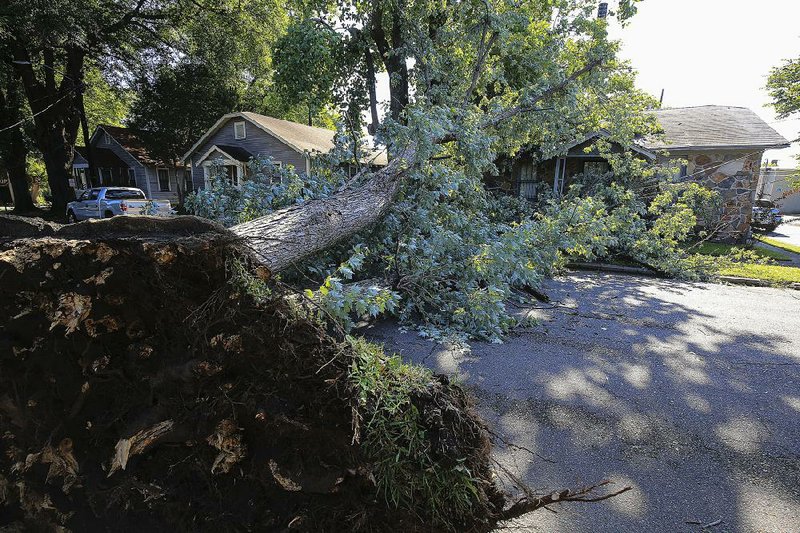 Tens of thousands of people in Arkansas were without power Thursday afternoon after strong storms moved through late Wednesday night into Thursday morning, downing trees and power lines.

At 4 p.m. Thursday, Entergy reported more than 44,000 customers in the dark, about half of them in Pulaski County.

"I don't think anyone thought these storms were going to come in this hard and fast," said Entergy spokeswoman Kerri Jackson Case, who added that the utility had called in hundreds of contractors to restore power. "I don't think we have an ETA for all of Pulaski County, but we have had people out assessing the damage. We have provided an ETA to everyone we could," she said about when power would be restored.

Workers were dealing with a mix of wind damage, fallen trees, broken utility poles, blown-out transformers and lightning strikes that knocked out power overnight, she said.

"A large part of it was caused by falling vegetation," she said. "Honestly it was just a big spring storm."

More than 70,000 homes and businesses were without power in Arkansas on Thursday, and more than 30,000 power failures each were reported in Texas, Louisiana and Alabama, where crews were working to remove toppled trees and clear blocked roads, The Associated Press reported.

The National Weather Service in North Little Rock said the damage was from two storm systems that moved across Arkansas. One moved from the western part of the state, and the other hit the eastern area.

Officials with the weather service said one of the storms moved across the central part of Pulaski County, along Interstate 30 through the heart of Little Rock and up through Jacksonville, with wind speeds of at least 60 mph.

"But there were no confirmed tornadoes in the state," Gilmore said. "It was just an impressive wind system."

Trees fell on several homes and vehicles. In Lincoln County near Avery, a pole barn was destroyed, and in Florence in Drew County, a mobile home was damaged.

In Little Rock, trees fell in numerous locations. One large tree blocked part of Kavanaugh Boulevard in the Hillcrest neighborhood for a time, and another fell through a fence of an apartment complex along Sixth Street near Sherman Street.

Beck Cross, who lives on North Polk Street, was standing outside her home Thursday morning assessing a tree in her yard that split in half.

"My tree was obviously struck by lightning," Cross said.

She said she was sitting in her home when the storm took a severe turn. 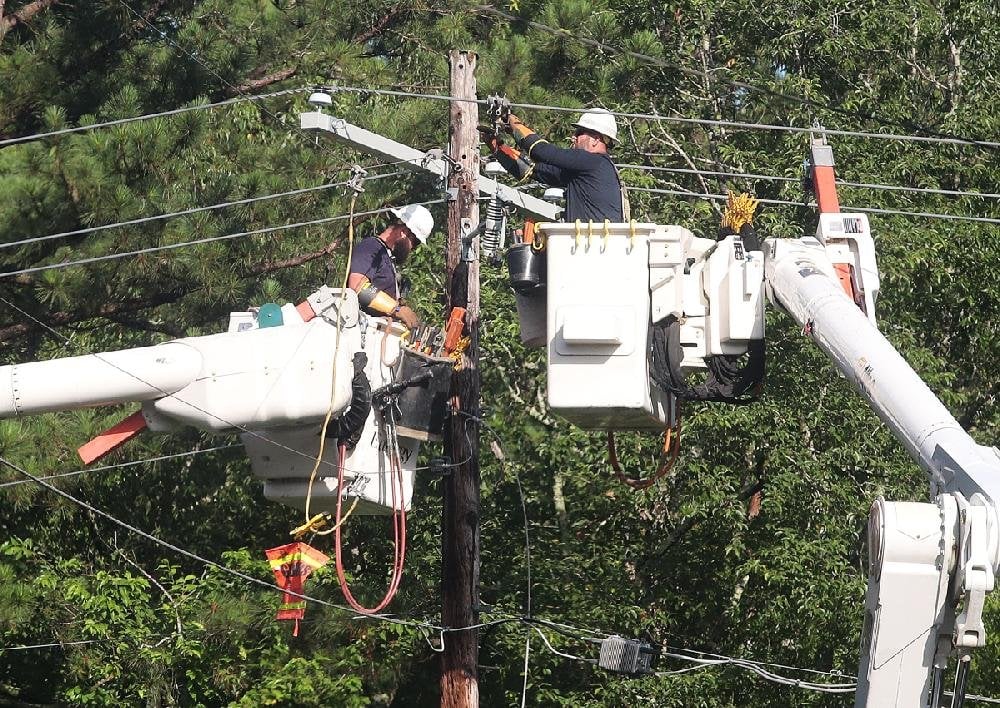 A team from Entergy works on a damaged power line Thursday in Hot Springs. Strong storms overnight left more than 70,000 homes and businesses around the state without power. More photos are available at arkansasonline.com/621damage/

"I was looking in the backyard and debris was flying everywhere," Cross said. "I was wondering if I should grab my dogs and run into the bathroom, and then five minutes later it was over. It was over too fast to even take cover."

"It was moving at a pretty good clip," Gilmore said. "The heart of the storm would probably be there for only five to 10 minutes."

Amy-Beth Driscoll, who lives on C Street just a few feet away from Lee Avenue, said she was recording the storm when she started to notice a shift in the weather.

"I was on Facebook Live from the front porch because at the time it was just lightning, and it looked beautiful," Driscoll said. "I went inside and then I started to hear these horrible noises. Once it was over we noticed our pool was gone."

She said the wind had picked up their aboveground pool and wrapped it around a light pole and into a fence.

"I have been in a lot of tornadoes and hurricanes, and I love weather so I wasn't too worried," Driscoll said. "But messing with a big metal pool while seeing lightning streak across the sky was unsettling."

Mary and Jeremy Reagan, who live on North Polk Street, were inside their home when they heard the rain pick up.

The rain was so loud it could be heard through gaming headphones, neighbor John Anderson said.

"I took my headset off for a second, and I was telling my friend how it was starting to really storm down here and then boom the power was out," Anderson said.

The storm was then quickly gone.

"My dogs didn't even have a chance to freak out," Mary Reagan said.

The couple said they heard what they thought was a tree limb fall, but when they looked outside they saw that it was something far bigger.

"I was like, 'Holy [expletive] the tree is gone,'" Jeremy Reagan said.

The tree had fallen on top of Mitch Tapson's home, but the Tapsons didn't realize it.

"The tree made little sound," Tapson said. "My wife thought the window had just been busted out of the bedroom she was in. I didn't hear a thing."

The tree fell on the Tapsons' bedroom roof only feet away from where Tapson's wife had been. The tree also crushed Tapson's car.

The storm also destroyed a utility pole behind their homes and blew the meters off some houses.

"It's incredible, horrifying in hindsight," Reagan said standing next to the fallen tree. "But somehow the potted plants here by the driveway didn't even move. This was a strange storm."

Among them were residents in the Fred W. Parris Tower on Broadway. While they said the elevators were working, the air conditioning, lights, water and other appliances weren't.

Several residents were resting in the shade outside the tower Thursday and said it was too hot to be inside, especially in the apartments with windows facing the sun.

Anthony Snell, the housing authority's interim director, said the staff was providing water to residents and working to get them food.

Andre Blakely, a division president with Gorman & Co., said the generators hadn't all been installed in the tower yet. The company manages the tower and is renovating it.

Blakely said employees were working overtime to make sure residents were taken care of. He added that all of the generators would be installed by the end of July.

A tree that crashed into power lines in an alleyway near Pine Street interrupted John Humphrey's vacation. He had taken a few days off from driving for a Little Rock retirement home. When he went to bed Wednesday night, he said he hoped the power would be back on when he woke up. It wasn't.

"We thought it was going to be just a thunderstorm, but when it came, it came all at once," said Humphrey, 68.

He said Thursday morning that he was trying to stay cool and was watching TV shows and movies -- like Safe House -- on his small, battery-operated DVD player.

Willie Coleman Jr., who lives at West 26th and Pine streets, said he has lived in the area 49 years and this was the worst storm he had ever seen.

"First thing I heard was the loud thunder, then the wind started blowing and then the rain started hitting the windows real hard," Coleman said. "I was like, 'd***, this is kind of unusual.' Then the lightning started to light up the entire house. I started to move towards the bathroom at that point. It was kind of scary."

Pamela Hopson, who lives a few feet from where a tree fell at West 25th and Pine streets, said the storm knocked down all of the power lines behind her house and it didn't appear that the lights would be back on anytime soon.

"We are always the last ones to get things fixed," Hopson said.

It is a problem for Hopson's family because her daughter has asthma.

"I asked my insurance, and they said the home had to be unlivable," Hopson said. "Well for my daughter it's unlivable, but I guess we will be staying in a hotel for the next few days."

Information for this article was provided by Ginny Monk and Gavin Lesnick of the Arkansas Democrat-Gazette.

Print Headline: Thousands without power a day after storms tear through state