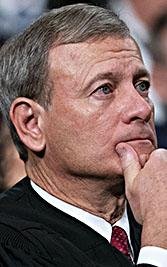 WASHINGTON -- The Supreme Court on Thursday put on hold the White House's plan to add a citizenship question to the 2020 census form sent to every household, saying it had provided a "contrived" reason for wanting the information.

Chief Justice John Roberts wrote the majority opinion for the 5-4 ruling. In a section agreed with by the court's liberal-leaning justices, he said the Commerce Department must provide a clearer explanation.

Agencies must offer "genuine justifications for important decisions, reasons that can be scrutinized by courts and the interested public," Roberts wrote. "Accepting contrived reasons would defeat the purpose of the enterprise. If judicial review is to be more than an empty ritual, it must demand something better than the explanation offered for the action taken in this case."

Roberts said a district judge was right to send the issue back to the Commerce Department for a better explanation.

Whether there would be time for the department to come up with such an explanation and get judicial approval is unclear. The administration has said a decision was needed by the end of June to add such a question; other officials have said there is a fall deadline.

After Thursday's ruling was announced, President Donald Trump tweeted that he has inquired with "the lawyers" whether the census may be delayed until the Supreme Court receives the necessary information to make a "final and decisive decision" on the matter.

"Can anyone really believe that as a great Country, we are not able the ask whether or not someone is a Citizen," Trump's tweet says. "Only in America!"

Those who challenged the citizenship question have said its addition to the form would result in an undercount of millions of people who fear acknowledging that a noncitizen is part of their household.

Roberts' bottom line -- that a lower court was right to say Commerce Secretary Wilbur Ross had not provided an adequate explanation for adding the question -- was joined by liberal-leaning Justices Ruth Bader Ginsburg, Stephen Breyer, Sonia Sotomayor and Elena Kagan.

In dissent, Justice Clarence Thomas said the Trump administration's inclusion of a citizenship question was well within the federal agency's discretion.

The court, he wrote, had overstepped its role by digging into the rationale for the decision with "suspicion and distrust."

"For the first time ever, the court invalidates an agency action solely because it questions the sincerity of the agency's otherwise adequate rationale," wrote Thomas, who was joined by fellow conservatives Neil Gorsuch and Brett Kavanaugh.

Justice Samuel Alito added, "To put the point bluntly, the Federal Judiciary has no authority to stick its nose into the question of whether it is good policy to include a citizenship question on the census or whether the reasons given by Secretary Ross for that decision were his only reasons or his real reasons."

Groups who had opposed adding the question were pleased but cautious.

"On the census, the Trump administration's lies went so far that even this Supreme Court had to say no," said Michael Waldman, president of the liberal Brennan Center for Justice. "If this leads to a result with no citizenship question, that would be a very welcome outcome, and it would also preserve the status quo. This should have been an easy case, and in the end, it was."

A string of lower-court judges found that Ross violated federal law and regulations in attempting to include the question on the census. They starkly rebutted his claim that the information was first requested by the Justice Department to enforce the Voting Rights Act, which protects minority groups, and they noted his consultations with hard-line immigration advocates in the White House beforehand.

Dale Ho, director of the ACLU's Voting Rights Project, said there is not enough time for the administration to try to come up with a new, legal rationale for adding the citizenship question.

"If they try to do this over the weekend, it's a sign of cutting corners and not reasoned decision-making," Ho said. "There really is not time. If the administration tries to rush it, that's clearly a red flag."

Justice Department spokesman Kelly Laco called the decision a disappointment, but said in an email after the ruling that the government "will continue to defend this administration's lawful exercises of executive power."

The case is Department of Commerce v. New York.