Running with the Lord: Little Rock church to minister to marathoners, spectators with ‘Communion on the Run’ 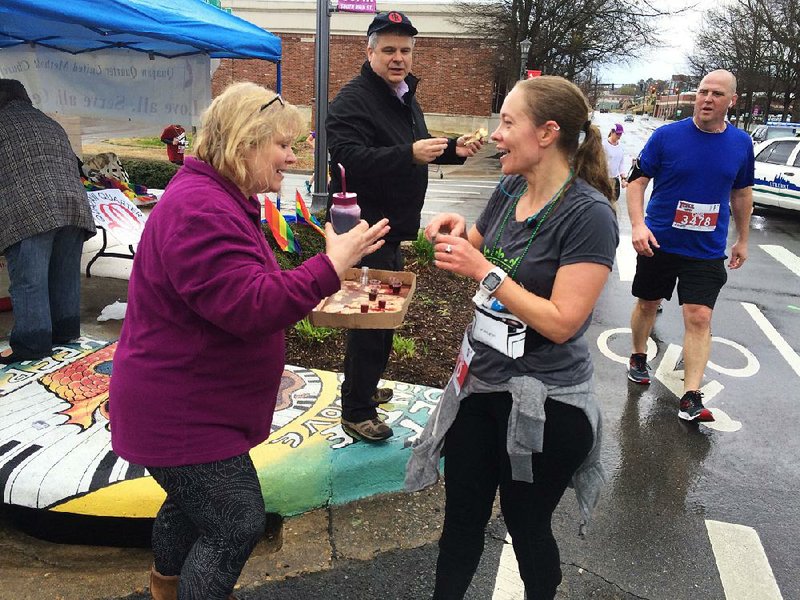 The Rev. Anne Holcomb (left), a retired pastor and member of Quapaw Quarter United Methodist Church in Little Rock, gives Communion in the form of tiny cups of grape juice during the 2018 Little Rock Marathon along with the Rev. Keith Coker, Quapaw Quarter’s pastor (center). The church will offer “Communion on the Run” for all who wish to partake on Sunday from 8-10 a.m. at the intersection of 16th and Main streets in Little Rock during this year’s marathon, according to Holcomb.

"I thought, 'Boy, if I'm going to be part of a church, that's the sort that I want to be part of,'" said Faust, who has worshipped at Quapaw Quarter ever since.

Faust recalled that her mind wasn't as open last year when the Rev. Keith Coker, Quapaw Quarter's pastor, proposed offering Communion -- the symbolic Christian rite of taking in the body of Christ -- to spectators of the Little Rock Marathon.

"I remember thinking -- and no doubt saying -- 'Well, I can't imagine that runners in the middle of a marathon would stop to take Communion,'" Faust said. "[Coker] said maybe they wouldn't, but spectators would ... and we ought to be out there [on the route]."

Now she and other church members and clergy are preparing to offer spiritual and physical sustenance to spectators and runners at the Little Rock Marathon for the second consecutive year Sunday in what the church has dubbed "Communion on the Run."

The outdoor ministry comes just days after the global United Methodist Church's vote to uphold its ban on same-sex marriage and ordination of lesbian, gay, bisexual and transgender clergy. Quapaw Quarter is a Reconciling Community, which means it supports full inclusion of LGBT people in the church. Ahead of the Tuesday decision, Coker said life in the church would continue with its activities, which include helping the homeless.

Coker said one of the places from which he drew inspiration for "Communion on the Run" was the "Ashes to Go" initiative undertaken among Christian denominations that takes the observance of Ash Wednesday -- the first day of Lent, known as a time of fasting and penitence leading up to Easter -- to the public through what he said was a drive-thru basis.

"We had the realization that the marathon was happening on a Communion Sunday, and that would [make for] many people downtown," Coker said. "Since we're 50 yards off the route, we thought, 'What a perfect thing to do.'"

The Rev. Anne Holcomb, a retired associate pastor for Quapaw Quarter and current member, said in the United Methodist denomination anyone is allowed to partake in Communion, and that in the part of the country that includes Arkansas, Communion is usually taken on the first Sunday of each month.

In a sanctuary setting, participants are given a piece of bread to dip in a chalice of grape juice, but on the marathon route Holcomb -- who will again offer Communion along with Coker as clergy -- and volunteers did their best to handle tiny plastic Communion cups that were difficult to manage on what was a rainy, windy Sunday last year.

"Technically you're not supposed to give one without the other," Holcomb said of the bread and grape juice. "But some people are like, 'Oh, no, I'm gluten-free,' or 'Oh, I can't drink grape juice,' ... so you just try to do it from a theological point -- you just gotta throw a blessing out there."

Geneva Lamm, executive director of the Little Rock marathon, said there are "quite a few" churches on the marathon route offering support. Mount St. Mary and Episcopal Collegiate School will both have aid stations.

"We asked [churches] to come out and pray for everybody, and we asked them to try to help us celebrate the runners and pray for them," Lamm said. "We've told them it's a way to reach anyone that's unchurched, [and] I think some have been very receptive over the years."

Last year's Communion on the Run drew about 300 participants, said Bobbi Pitts, a Quapaw Quarter member who, along with her husband, Jim, were in charge of distributing granola bars and sliced bananas, and making more than one trip to replenish the fruit.

Communion on the Run originally was intended for spectators, but Faust said the group was surprised and pleased when runners stopped to take Communion, or pluck a piece of bread or a cup of grape juice in passing.

"For some people who ... go to church and know how it works, it [was] like, 'Thank you, because I was going to miss it at my church.' Other people were like, 'The body of what? What am I doing? I just thought it was a snack,'" Holcomb said. "We'll just give them a spiritual snack -- and half a banana, too."

This year, the church will have nailed down some of the finer details -- like having volunteers farther down the trail holding garbage bags for runners to throw away their banana peels.

"It was a hoot," Faust said of the leavings. "Nobody had thought about that ahead of time. You could look down the street and it was just a trail of banana peels with runners going through it. It had the potential to be a good cartoon."

Quapaw Quarter intends to set up again at the intersection of 16th and Main streets, and Coker said a Communion service will begin at 8 a.m. Those passing by afterward can receive the "blessed elements" of Communion if they wish, and snacks will be available.

For Faust, Communion on the Run also means reinforcing the church's presence in the neighborhood. Quapaw Quarter voted in December 2017 to sell the 91-year-old Gothic Revival-style building it worships in, and since then has been looking at other properties in the area. And although one of the church's members helped secure a $60,000 grant since then that helped repair the church's tower, Faust said the church would need more money to make the remaining repairs necessary to maintain the building.

Faust also said that while the church's continuation is important, the top priority of Communion on the Run is about recognizing a need to be out and ministering to the public.

"We have to come out of our our customary safe houses of worship if we're really committed to sharing God's grace with our people, and so we should look for ways to do that."

Print Headline: Running with the Lord: Little Rock church to minister to marathoners, spectators with ‘Communion on the Run’