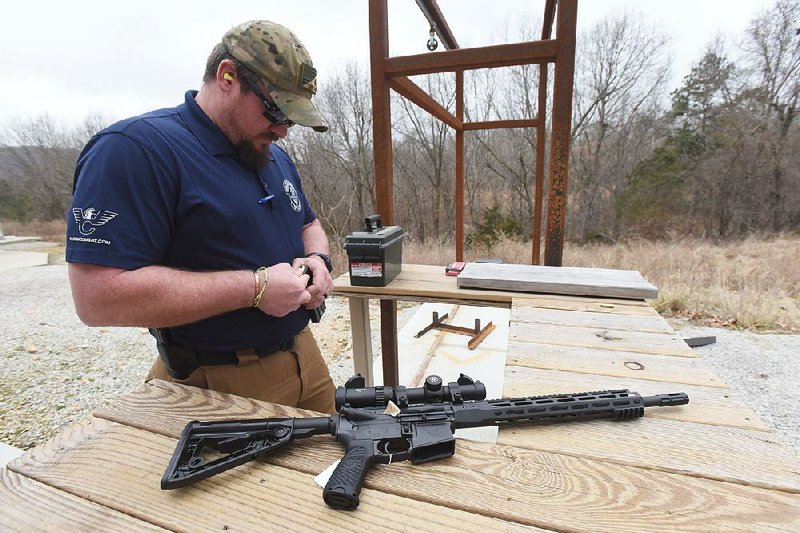 Guy Joubert, director of manufacturing at Wilson Combat, loads the magazine of a Protector Series rifle at the company’s headquarters near Berryville in Carroll County.

BERRYVILLE -- Custom gun-maker Wilson Combat is selling its first production AR-15-style rifle in a bid to offer a product more attractive to retail customers interested in an off-the-shelf model.

Wilson's Protector line was released at the beginning of the year and is available in three calibers and with two receiver finishes, rather than the dizzying array of features and options typical to Wilson's custom offerings.

Wilson Combat was founded in 1977 by competitive shooter Bill Wilson. The privately held company in Berryville in Carroll County has initiated major expansions in the past few years, with one in 2015 focused on rifle production. It employs about 175 people, including about 60 gunsmiths.

While Wilson Combat is well known for its custom 1911-style pistols, it has moved significantly into rifle production in recent years, Guy Joubert, head of product development at Wilson Combat, said during a recent interview. Including the Protector rifle, the company produces 15 rifle models to date, including some that can be customized and personalized by the buyer.

Wilson sells rifles in the AR-15 platform, which supports smaller calibers; the AR-10, which handles larger caliber rounds; and the AR-12, which allows chambering in Wilson's signature .458 Ham'r cartridge. The gun-maker offers other rifles in 21 calibers, a variety that's important to the gun-maker's customer base, Joubert said. 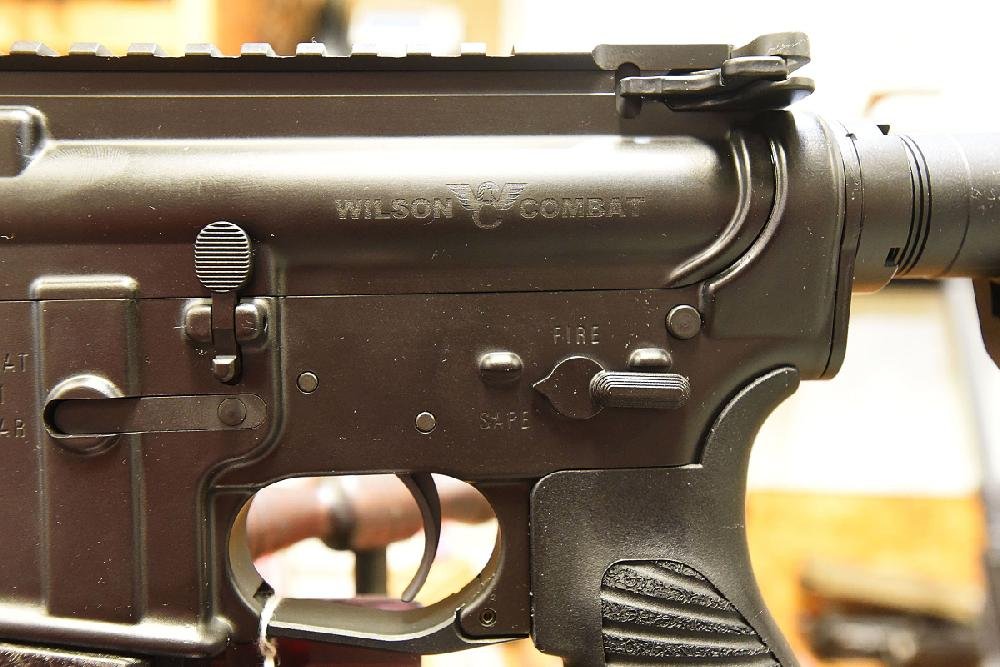 The Wilson Combat logo appears above the safety switch on a Protector Series rifle.

The Protector series, which includes an AR-pistol variant, is the company's first stab at an out-of-the-box product. The idea was to offer a quality firearm that has just enough options to be attractive for purchase at a gun shop or even a national retailer. Joubert said the guns will be sold to the company's regular distributors and through its website as well.

The Protector line is chambered in 5.56mm NATO, .300 Blackout, and .300 Ham'r, which was developed by Bill Wilson. It offers receivers made by Wilson Combat in black and coyote tan. The carbine comes with 16-inch match-grade barrel made in the Berryville plant and an adjustable stock. The pistol variant comes with an 11-inch Wilson match-grade barrel and forearm brace attachment. The Protector carbines and pistols retail for $1,999.95.

"We wanted to have a model that we could offer to retailers," Joubert explained. "We wanted to make it appealing to the general public, without sacrificing on quality."

In recent years, in addition to its own pistol lines, Wilson has begun customizing and offering aftermarket parts for other pistols made by major manufacturers including Beretta and Glock.

"The Protector line, and our rifles in general, are another way we're diversifying our product line," Joubert said.

There were 11.5 million firearms of all types manufactured in the U.S. in 2016, the highest number since reporting began in 1986, according to the most recent Firearms Commerce in the United States annual update by the U.S. Department of Justice Bureau of Alcohol, Tobacco, Firearms and Explosives. Of those guns, 4.24 million were rifles, also a record for production. During the time frame, the U.S. exported 376,818 firearms of all types, including 147,044 rifles and the U.S. imported 4.5 million firearms, including 572,309 rifles.

Rob Southwick, president of Southwick Associates in Florida, a market research firm specializing in hunting, shooting, sport fishing and outdoor recreation markets, said via email that the price point on Wilson's Protector line was good. He said rifle demand had been soft in 2018 but it seemed to be picking up. If new gun regulations continue to gain traction, he added, sales in all guns, including rifles, will likely increase.

The FBI reported National Instant Criminal Background checks for 2018 totaled 26.18 million, up from 25.23 million in 2017 but down from record breaking 2016 with 27.54 million. The checks have been tallied since 1999. While the FBI background check figures don't represent the number of guns sold one for one, they are generally used as indicators of firearms demand.

Over the next five years U.S. gun and manufacturing's growth will come primarily to defense spending, according to a report from market research group IBIS World. Revenue is projected to rise 2.3 percent a year to $19.6 billion. The segment not only includes arms and ammunition used by civilians but also machine guns, ammunition and other gear sold to the military.

The report also notes that over the next five years the market share of the industry aimed at civilian consumers is expected to decline but since demand is driven in part by fear of new, stricter gun regulations, as prospects for stricter federal regulations grown, a jump in demand may return.

Just last week, House Democrats passed a bill requiring a background check on all gun purchases, even private sales between individuals but its expected to be blocked by the Republican-led Senate and President Donald Trump has vowed to veto it.