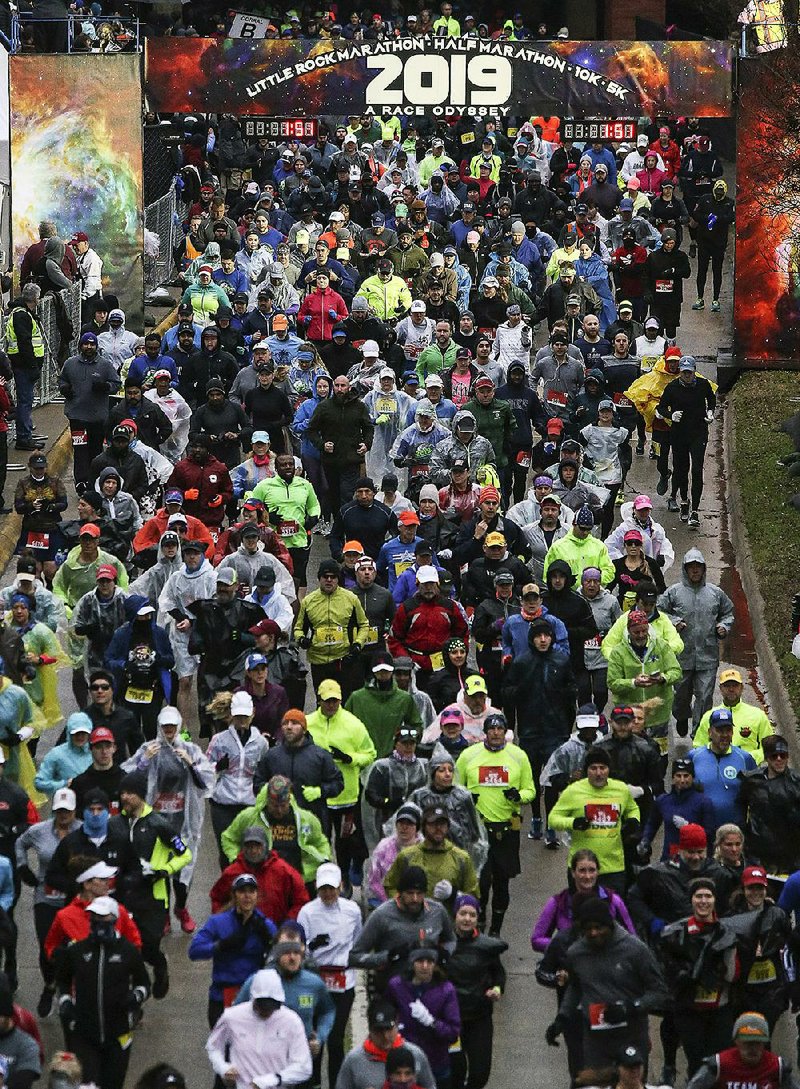 Runners head off during the start of the 2019 Little Rock Marathon Sunday, March 3, 2018 in Little Rock.

The Little Rock Marathon was cold, wet and windy Sunday, conditions that made for somewhat miserable circumstances for runs or walks of 26 miles, 385 yards.

But for the elite runners, the weather was nearly ideal.

Overall winner Jeremy Provence wore running shorts and a light windbreaker. Still breathless from his effort, he addressed a dozen or more reporters, most bundled in multiple layers against a 31-degree wind chill and the sting of blowing snow and sleet.

"My jacket kept me warm," he said. "I was good the whole way. I was just focusing on staying at an even pace and just finishing."

Provence took the lead shortly after the 8 a.m. start, when it was 37 degrees in downtown Little Rock with light rain and a north wind of 13 miles an hour. The rain turned heavier as he passed the race's midpoint with a half-marathon time of 1:20:05.

Provence stood inside the lower level of the Statehouse Convention Center next to a medical-tent heater about 15 minutes after his victory. He said he expected to win after reaching the halfway point.

Bradbury, the 2017 Little Rock Marathon winner in 2:45:44, said it was clear early on that his race was for second.

"I was just kind of doing my own thing, running my own pace," he said.

Weather was not a factor, Bradbury said.

"I usually run in cold conditions," he said. "This works for me. At least no one can overheat."

"I thought the weather was great," he said. "The only thing that bothered me a little bit was the wind. I started noticing it at about Mile 16, and it seemed like I worked against it the rest of the way in."

Massanelli knew cold weather was on the way, but she had no idea she would win or run as fast she did. Her winning time was five minutes faster than her previous best of 3:19:23 established in last year's Little Rock Marathon.

"That time was completely unexpected," she said.

Massanelli said she knew Tia Stone, first among women finishers of the Little Rock Marathon from 2016-18, would not race Sunday after Stone texted her that she was too ill to participate. Stone won the race last year in 2:59:13, but Massanelli, a Little Rock Central and University of Virginia graduate, said she thought Stone's absence would mean no more than finishing one spot higher in the final results than last year.

"I usually finish like sixth or seventh," she said. "If I finish in the Top 10, that'll be fine. This is like a dream. This is just unreal."

When she took the lead on a downhill section near Mile 17, Massanelli realized she might win.

Provence finished third in 2017 and in last year's Little Rock Marathon, a race won by Drew Mueller of University City, Mo., in 2:32:34, with Provence four minutes back. Provence knew Mueller's decision to run the Little Rock Half-Marathon trimmed the strength of his competition.

"I knew it was one less guy that you have to battle," Provence said. "You know the marathon. If you've run marathons, it just may not be your day. I mean, it's 26 miles, and you never know what's going to happen. You just hope that it goes well.

"I figured the weather would keep some people away, but I never worry about that. I just went out and tried to execute what I needed to do."

Provence said he expects to return next year.

"I enjoy this race," he said. "I'm from Arkansas, and this is kind of the big marathon in this state. At least it is for me, so I'll definitely try to come back next year and see what happens."