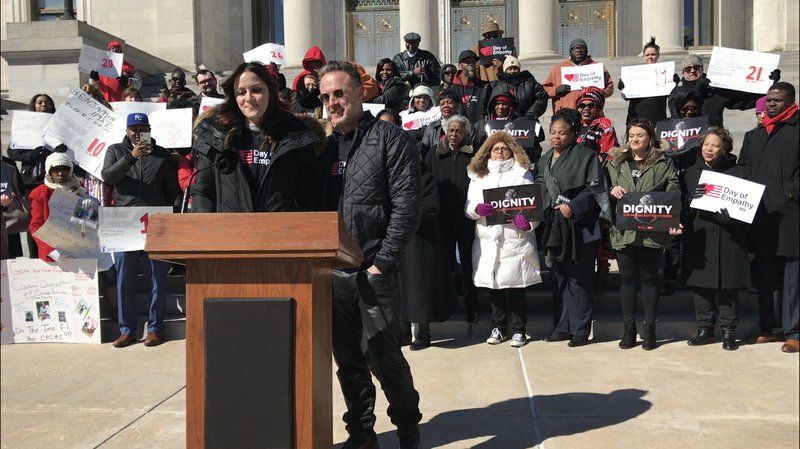 Christina and David Arquette speak on the steps of the state Capitol at an event urging empathy and criminal justice reform on Tuesday.

Actor David Arquette and his wife Christina, a native Arkansan, were in Little Rock on Tuesday, calling for empathy for Arkansas’ incarcerated population and their families.

The two appeared alongside criminal justice advocates before the state Capitol for #cut50’s third annual National Day of Empathy.

Christina Arquette, who was born in Hope, said in an interview before the event that the couple were there to call for greater empathy and smarter policies for those involved in the state's criminal justice system.

“We’re gathered here at the Capitol to talk about empathy and compassion,” she said. “And I think the big point is that the criminal justice reform space not only affects victims of crimes but also people that have committed crimes.”

Christina Arquette cited her birthplace as one of the reasons she advocates for greater empathy toward those who are incarcerated.

“I always joke because I was raised in the South that Southern hospitality is a real thing,” she said. “My parents raised me to love and to be kind and to have compassion and empathy.”

David Arquette, an actor known for his role in the Scream franchise, said recent legislation at the national level centered on criminal justice reform “is just the first step,” and that there’s a lot of work to do.

“Hopefully we can make some changes because the system’s broken,” he said. “We just need to figure out how to make that work.”

The two produced a documentary in 2018 titled Survivor's Guide to Prison exploring the United States' prison system, and have been involved with #cut50 for more than a year, Christina Arquette said. Working on that film helped them to better understand what prison is like for those who are incarcerated, she said.

The day, according to Ruby Welch, who is Arkansas’ dignity ambassador for #cut50, is about bringing together the voices of people who’ve been affected by incarceration in the state.

“Empathy is not only understanding but sharing and feeling what another person has gone through or is going through as far as being impacted by the criminal justice system,” she said.

After the speakers finished outside the Capitol, Welch said the group planned to move inside and speak with lawmakers about legislation intended to decrease the state's prison population and improve conditions for incarcerated women.