U.S. budget deficit skyrockets by 77% at start of fiscal '19

WASHINGTON -- The federal budget deficit ballooned rapidly in the first four months of the fiscal year as tax revenue fell and spending rose, the Treasury Department said Tuesday, posing a new challenge for the White House and Congress as they prepare for a number of budget battles.

The deficit grew 77 percent in the first four months of fiscal 2019 compared with the same period a year before, the Treasury Department said.

The total deficit for the four-month period was $310 billion, the department said, up from $176 billion for the same period a year earlier.

"It's big tax cuts combined with big increases in spending when they already had big deficits," said former Senate Budget Committee Chairman Kent Conrad, D-N.D. "So guess what, it's craziness."

When Republicans seized control of the House of Representatives during President Barack Obama's administration, lawmakers and White House officials embarked on a number of strained negotiations to try to reduce the gap between spending and tax revenue. During President Donald Trump's administration, there have not been any similar discussions, and Trump has largely pushed for an agenda of tax cuts and spending increases that has grown the deficit markedly.

Tax revenue for October 2018 through January 2019 fell $19 billion, or 2 percent, the Treasury Department said. It noted a major reduction in corporate tax payments over the first four months of the fiscal year, falling close to 25 percent, or $17 billion.

As part of the 2017 tax-cut law, the tax rate paid by corporations was lowered from 35 percent to 21 percent.

Tariff revenue, however, rose to $25 billion in the October-January period, up 91 percent from the same period a year ago. This reflects the higher tariffs the Trump administration has imposed on China and other nations in various trade disputes.

The Congressional Budget Office has projected that the deficit this year will reach close to $900 billion because the government spends so much more money than it brings in through revenue.

The White House next week is expected to propose a new budget plan for the fiscal year that begins in October, and Democrats are working on spending plans of their own. So far, there has been little effort to reconcile differences between the parties, and neither has shown much interest in addressing the widening budget deficit.

The White House plan will propose cutting a number of domestic programs by at least 5 percent, including things like environmental protection, education, and foreign aid, according to Trump administration officials who have previewed some of the plans. It also will propose adhering to caps on military and nonmilitary programs put in place several years ago, but it will simultaneously propose boosting defense spending in an uncapped program as a way to divert more money to the military.

Fiscal conservatives have criticized this type of maneuver in past years, but White House acting budget director Russ Vought wrote in an editorial last week that it was the best option for diverting more money to the military.

The ballooning deficit comes as interest rates are expected to begin rising, driving up the cost of borrowing money. The government is projected to spend $383 billion on interest payments for its debt this year, and that will rise to $581 billion in 2022, according to the Congressional Budget Office.

There has been a total breakdown in Washington, however, over how to address the budget deficit. The White House has walled off popular programs Medicare and Social Security from any proposed cuts, with Trump saying it would be too politically unpopular to pursue changes to programs used by tens of millions of Americans.

Democrats are also split over how to proceed. The ranks of fiscal hawks have dwindled, and a newer, vocal wing of the party has called for more deficit spending to finance social programs. Some in that wing argue the debt is less pressing than other social maladies, such as poverty or inadequate health coverage, while others argue the debt is of little consequence at all.

Instead of trying to resolve their differences, the White House and some Democrats are seeking to make the 2020 elections a referendum on economic policy, suggesting neither side is looking to reach a compromise in the coming months.

But the White House and Congress must reach an agreement on a new spending package by Sept. 30 or they could face another government shutdown.

Policymakers also must reach an agreement by this fall on raising or suspending the debt ceiling, as the government will no longer be able to borrow money to cover many payments if Congress doesn't act.

Lawmakers have not begun debating how to deal with the debt ceiling at all, even though the last temporary suspension ended Friday.

The department can use so-called extraordinary measures to prevent a default on payments. Mnuchin notified Congress on Monday that he is using such measures to redirect money from the federal civil service's retirement fund.

"I respectfully urge Congress to protect the full faith and credit of the United States by acting to increase the statutory debt limit as soon as possible," Mnuchin wrote in a letter dated Monday addressed to congressional leaders.

Mnuchin can extend the period during which the retirement funds are diverted beyond June 5 and has other special measures he can use to delay a U.S. default beyond that date.

During the tax-cut debate in 2017, the White House promised that slashing tax rates would end up creating more revenue because it would allow the economy to grow at a faster clip. Economic growth did pick up in 2018, but Democrats have said the growth will be short-lived. So far, the growth has not come close to the levels needed to offset the $1.5 trillion in tax reductions that were part of the legislation.

Accumulating deficits add to the overall federal debt, which totaled more than $22.03 trillion as of Monday. That figure includes more than $5.6 trillion the government owes itself, including about $2.8 trillion borrowed from the Social Security Trust Fund, according to Treasury Department reports.

The U.S. economy is still the strongest in the world, and investors have retained a healthy appetite for U.S. government debt because the country has never defaulted on its obligations. But large debt levels have caused financial crises in a number of other countries and forced major economic changes that have led to recessions, a phenomenon that some have warned could happen in the U.S. if steps aren't taken.

Sen. James Lankford, R-Okla., was bemoaning debt levels on Tuesday, a few hours before the Treasury Department reported the big increase in the deficit.

"If you take 22 trillion miles, total distance, you would fly from Earth to Pluto and back 3,081 times," Lankford said on the Senate floor. "This is a heavy debt."

Information for this article was contributed by Damian Paletta of The Washington Post; by Martin Crutsinger of The Associated Press; and by Saleha Mohsin and Erik Wasson of Bloomberg News. 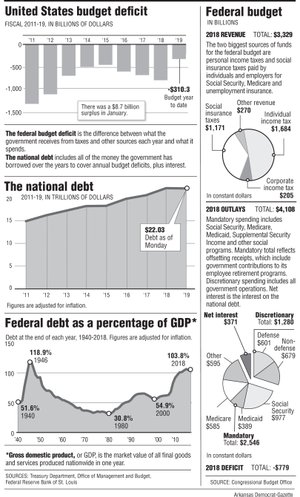