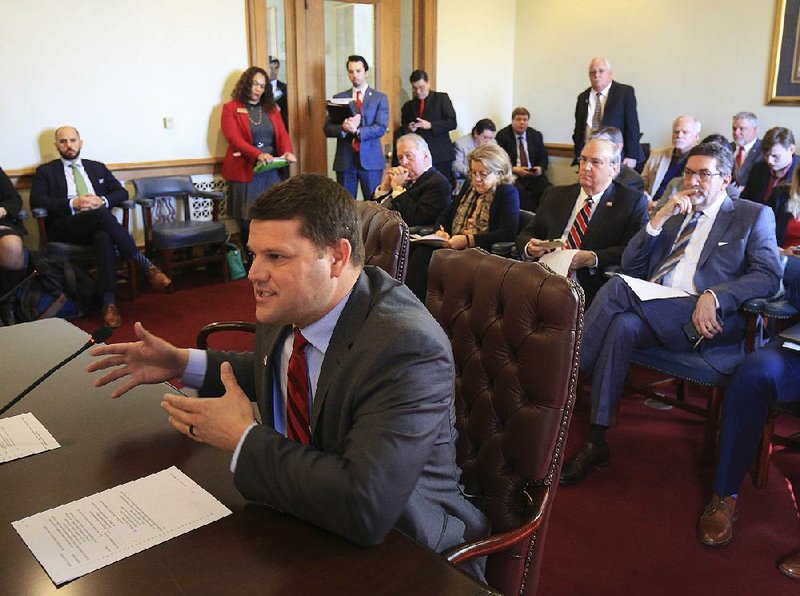 A state senator said he won't meet with the Arkansas Freedom of Information Task Force because he doesn't have time and nothing the members say will affect a bill he sponsored to keep documents secret regarding where the state gets its execution drugs.

Sen. Bart Hester, R-Cave Springs, the sponsor of Senate Bill 464, said no such meeting will happen during the current session of the state Legislature.

"Time is too valuable right now," he said. "Their input on a bill like this has zero effect on the outcome."

Hester said he's usually visiting with constituents in Benton County on Fridays, and that's when the task force meets at the Capitol in Little Rock.

"I have really important issues I'm dealing with every day," he said. "To go and take a day out of my calendar to spend 30 minutes with a task force when the outcome of that task force doesn't have an effect on the legislation is not the best use of that time currently."

"I can't make him attend," said Ellen Kreth, who chairs the task force. "It's a voluntary appearance."

Kreth is publisher of the Madison County Record, a weekly newspaper in Huntsville.

The task force is a bipartisan group of nine members who represent government, academia and the media. The task force reviews laws that affect the state's Freedom of Information Act, and makes recommendations to Gov. Asa Hutchinson and legislators regarding changes to those laws.

Kreth said the task force was established in 2017 by a 34-0 vote in the Arkansas Senate, which included Hester's vote.

She said most of the task force members are government attorneys and political appointees.

"This is not a committee of press people coming out against every FOI bill," said Kreth. "The way I view our role is we are nonpartisan. We review the bill from a very nonpartisan view. We would never advocate for or against any merits of any bill. We only look at how that bill would affect the Freedom of Information Act. We are not an advocacy group."

"I don't want to discount the value that the task force has," he said, "but their thoughts on this particular issue, it's not open for discussion."

Hester filed Senate Bill 464 on Monday. It would prevent the release of any identifying information about the "manufacturers, suppliers and others involved in the provision of lethal injection drugs." It also prohibits any government officials from disclosing the same information.

Under current Arkansas law, the name of the drug manufacturer can be obtained through an open-records request, but not others in the supply chain such as the distributor.

Hester's bill was referred to the Senate Judiciary Committee, which gave it a "do pass" recommendation Thursday.

Hester said the bill will likely be on the Senate floor Monday.

He said one reason he doesn't want to meet with the task force is he already knows what the members would say.

"I would be shocked to assume they are going to say anything other than that they oppose it," he said. "They're going to say they think a privacy issue like this should be FOI-able so these people can go to that company and create turmoil for that company so they won't sell that drug to the state anymore, and I disagree."

Kreth said the task force met Friday and reviewed eight bills. Hester was invited but didn't attend in person or through a conference call. Kreth said legislators normally meet with the task force and often make changes to their FOI bills as a result.

"Maybe he would not have changed his mind at all, but at least he would have heard a diversity of opinions," said Kreth.

On Friday, Hester told an Arkansas Democrat-Gazette reporter that a member of the task force spoke to the Senate Judiciary Committee on Wednesday and left him with the impression that the group was against the death penalty.

But Kreth said nobody from the task force attended Wednesday's committee meeting. She said Hester must be thinking of Sonny Albarado, who spoke on behalf of the Arkansas Freedom of Information Coalition, which is sponsored by the Arkansas Press Association.

Albarado, who is projects editor at the Arkansas Democrat-Gazette, said Sen. Alan Clark, R-Lonsdale, asked him during the meeting about his opinion on the death penalty.

"I told him I didn't think it was relevant," Albarado said.

Hester said he may have gotten the two FOI groups confused, but it didn't matter. He doesn't plan to run his bill by either one of them.

Alec Gaines, a Little Rock attorney who represents the newspaper, said many manufacturers have contracts with suppliers that should prevent them from providing the drugs to state departments that are in charge of executions.

"These are lifesaving drugs," Gaines told the task force. "They're not meant for executions."

Gaines spoke before the task force Friday as a member of the public. In 2017, he represented a plaintiff who sought the release of package labels and inserts for the drugs.

Robert Steinbuch, a law professor at the University of Arkansas at Little Rock, is a member of the task force.

"I am a conservative law professor," he said Saturday. "I, individually, have no moral objection to the death penalty. Had Sen. Hester come to the FOI task force meeting, perhaps we could have had a discussion along those lines."

Steinbuch said transparency is a conservative value because "government grows in darkness, not in light." He said Hester's bill is acquiescing to drug companies who want government permission to "operate under a cloud of darkness."