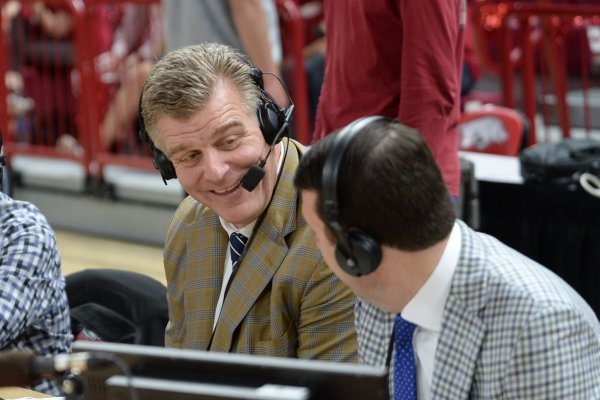 FAYETTEVILLE -- Joe Kleine had planned to watch Daniel Gafford and the University of Arkansas basketball team play Alabama on Saturday on television from his home in Little Rock.

Instead, Kleine -- the former Razorbacks All-American 7-foot center who played 15 seasons in the NBA -- found himself with a midcourt seat in Walton Arena calling the game as a color analyst for the SEC Network telecast.

Kleine became a late replacement when Barry Booker -- who was scheduled to work the game -- had travel problems that prevented him from getting to Fayetteville.

Working the game allowed Kleine the opportunity to see Gafford's game up close.

"When you're that close and see the things Daniel does -- and does them with ease -- it's amazing," Kleine said. "I've only seen one other guy in college basketball this season who's a better athlete than Daniel, and that's Zion Williamson."

Williamson, Duke's 6-7 freshman forward, is expected to be the No. 1 overall pick in this year's NBA Draft.

Several draft projections have Gafford, a 6-11 sophomore from El Dorado, being a first-round pick.

Gafford figured to have raised his draft stock against Alabama in leading the Razorbacks to an 82-70 victory. He had 29 points, a career-high 16 rebounds, 2 blocked shots and 2 assists against the Crimson Tide's athletic big men, including 6-9 senior Donta Hall, and 6-9 sophomores Galin Smith and Alex Reese.

"I talked to some people that were worried Arkansas was going to get dominated in the paint," Kleine said. "And it was the other way around."

Gafford hit 11 of 17 shots, most notably grabbing a loose ball and dribbling the ball about 70 feet -- including a cross-over move -- and finishing at the basket with a layup.

"I know that's not going to happen again in a million years, probably," Gafford said. "But, I mean, I didn't see anybody I could pass it to, and I didn't want to turn the ball over.

"When I crossed over on Herbert [Jones], the lane was just wide open. I had somebody behind me, so I was trying to at least handle it a little bit.

"I didn't want to take it between my legs. I knew it was going to bounce off one of my feet, so I just took it to the rack and Hall was right there. I was going to see if I could finish over him, but he never even contested it, so I had a wide-open layup."

Kleine joked with play-by-play man Richard Cross during the telecast.

"I told Richard that probably reminded a lot of people of a young Joe Kleine," he said laughing. "I said if I would have done that, Eddie Sutton [his coach at Arkansas] would have been screaming bloody murder when I started dribbling at half court.

"But that just shows Daniel's versatility, being able to do that at his size."

Arkansas Coach Mike Anderson was surprised when Gafford took off like a point guard.

"I didn't know what he was doing," Anderson said with a smile. "He'd just better be glad he made the play. But he was having fun -- and playing for a coach like me that would give a big guy the freedom to do that, I must be crazy."

Gafford's play that impressed Kleine the most was his basket on a move in the lane with 3:51 to play that completed his personal 10-0 run that put Arkansas ahead 69-57 after Alabama had cut a 13-point deficit to seven.

"The play I really liked was the post move where he caught the ball on the wing and the shot clock was going down, and he dribbled to the middle," Kleine said. "They cut him off, and he spun back baseline and made a nice little hook.

Gafford had six dunks against Alabama, but also tipped in an alley-oop pass from Isaiah Joe in the first half.

"That was more impressive than the dunks," Kleine said. "It was a harder ball to catch, and he controlled it and put it in with ease.

"I just think his ability to go get balls that are lobbed to him is so impressive, and he's a fantastic offensive rebounder. His hands are exceptional. He gets his hands on a lot of balls, and he makes plays that a lot of people, they wouldn't gather that ball in, and then he's able to go up and dunk it in traffic. He's just a special player."

"I know his free-throw shooting isn't stellar, but I like how he shoots," Kleine said. "He has beautiful rotation on the ball. There's no hitch in his shot. You can tell he's been working on it."

When Anderson took Gafford out of the game with 1:27 left, some fans started chanting "One more year!" while giving him a standing ovation.

"Good luck with that," Kleine said.

Gafford, who likely played his final home game for the Razorbacks, said he appreciated the fans' sentiment.

"Of course," Gafford said. "Yeah, I did. A lot. You can't go a day without appreciating the fans at the Hog basketball games because you know they'll go to war for you."

"I think it fits perfectly," Kleine said. "In the modern-day NBA, teams want big guys that can really run and get up and down the floor and get a layup or dunk and pick-and-roll to the rim, and that's Daniel.

"I really get a kick when a big guy like Daniel is having success for the Razorbacks. It brings back a lot of good memories."