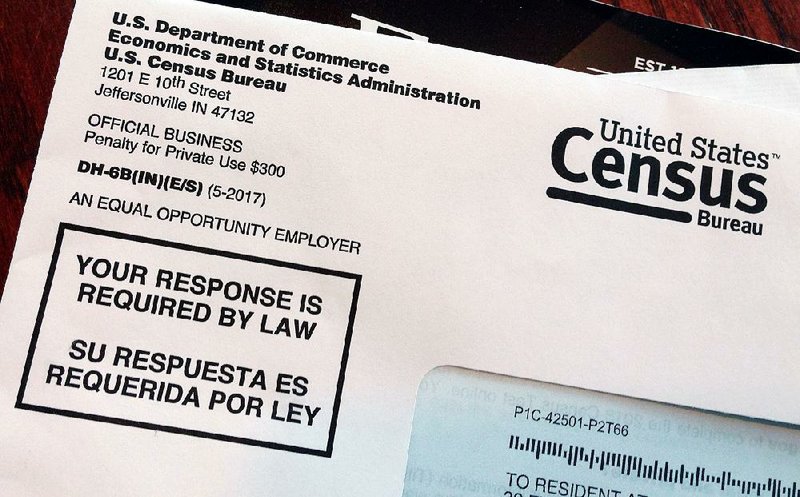 WASHINGTON -- With the economy growing and joblessness the lowest it has been in decades, U.S. Census Bureau officials know it's not the ideal time to be trying to hire hundreds of thousands of temporary employees.

But with next year's constitutionally mandated census approaching, they're gearing up anyway to hire short-term employees.

Recruitment efforts are already underway in Arkansas, with job listings in Jonesboro (population 75,866) and Conway (population 65,782), as well as smaller communities such as De Queen (population 6,591) and Gamaliel, an unincorporated Baxter County community just south of the Missouri state line.

Pay varies, depending on the job and the location. Many positions listed starting salaries of $12.50 an hour, with pay climbing to $14 an hour once the job training is complete.

Census officials estimate that they'll be hiring between 6,000 and 7,000 people statewide before the count is complete.

Nationwide, the census is attempting to recruit as many as 60,000 people to update and verify address lists before the 2020 census. On top of that, the agency hopes to hire and train between 400,000 and 450,000 enumerators. These are the people who will attempt to track down the tens of millions of Americans who fail to respond to the census in a timely manner.

The census's total workforce nationwide is expected to surpass 500,000 people.

"One of the things that keeps me up at night ... is the challenge of hiring our workforce in a strong economy with low unemployment numbers," said Al Fontenot, the Census Bureau's associate director of decennial census programs.

Interest in jobs, thus far, has been higher than anticipated, he noted.

"Our goal for our current plan was to have 15,000 candidates in our applicant pool by March 1," he said.

That bar, he discovered, had been set too low.

"As of [Tuesday] morning, we have more than 172,000 applicants who have gone in, created a profile, completed the assessment and moved into our hiring pool, so I'm very excited about that," he told reporters Tuesday.

In Arkansas, census recruiters are already holding meetings around the state, seeking to drum up interest.

"We need to hire a lot of people," said Area Manager Kazeem O. Hamed, the official in the Chicago regional office who is overseeing the rollout in Arkansas and Missouri. "I am committed to making sure that Arkansas has the staff needed to get the 2020 decennial census where it needs to be."

The Census Bureau plans to open two offices in Arkansas in June or July: one in Little Rock and one in Fayetteville, Hamed said.

Ten years ago, there were 494 local census offices nationwide. This time, officials plan to open only 248. Because of technological advances, there's no longer a need to fill out paper timecards or submit piles of handwritten paperwork. The information, instead, can be submitted electronically.

Article I, Section 2, of the U.S. Constitution mandates that a national census -- or "enumeration" -- be conducted every 10 years.

Seats in the U.S. House of Representatives are reapportioned once every decade to reflect the latest counts. Each state is entitled to at least one seat. The rest are allocated based on population.

The count also affects the amount of federal tax money that each state receives.

While the final count won't be known until at least December 2020, officials expect the updated total population to surpass 330 million.

Arkansas' current population is estimated at 3 million by the Census Bureau. The 2010 Census said the state's population was 2.9 million.

Anyone living in the United States on April 1, 2020 -- regardless of citizenship -- is supposed to be counted, but response rates are down from 1970.

The Trump administration wants to add a question to the 2020 questionnaire about whether a person is a U.S. citizen. The question was challenged in the courts, and the U.S. Supreme Court is expected to hear the matter in April.

In 2010, 63.5 percent of residents "self-responded" to the census -- they filled out the survey and promptly submitted it.

Officials estimate that figure will drop to 60.5 percent this time.

The federal government will spend billions of dollars trying to track down the remaining 39.5 percent.

The refusal or willful neglect to answer census questions is a federal crime. Violators can be fined up to $5,000, though they can no longer be imprisoned. The provision punishing noncompliance with up to 60 days behind bars was dropped in 1976. But those who intentionally provide the census with false answers can be fined up to $10,000.

People who refuse to comply are rarely prosecuted, but that doesn't mean there aren't consequences, Fontenot noted.

States lose power and money when undercounts occur, he noted.

To ensure that the Natural State isn't undercounted, advocates are launching the Arkansas Counts Complete Count Committee, which will seek to boost participation.

The nonprofit Arkansas Community Foundation is one of the groups promoting the effort.

"It's about making sure that Arkansas has the resources that are necessary to provide the programs that benefit everybody in the state: transportation funding, Medicare, Medicaid, school lunches, programs that are important to our state and benefit people across the state," said Sarah Kinser, the foundation's chief program officer.

In 2020, completing the census will be easier than ever before.

"People can respond anywhere, anytime, using their smartphone, their tablet or their personal computer," Fontenot said.

The traditional paper questionnaires also will be an option. In addition, people will be able to answer the questions over the phone.

Census officials predict that 60 percent of "self-respondents" will complete the forms online, 33 percent will turn in written questionnaires, and 7 percent will phone in their responses.