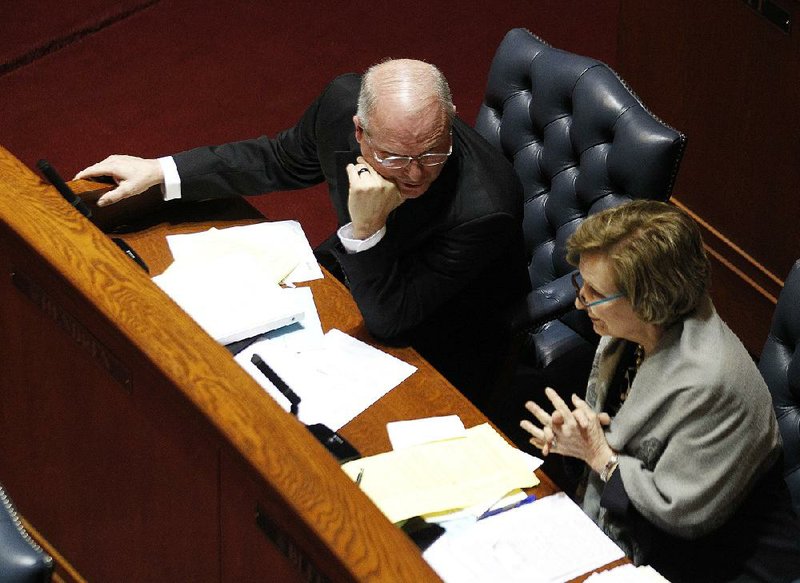 The Arkansas Senate on Wednesday narrowly approved legislation that would provide about $97 million a year in income tax cuts targeted largely for low- and moderate-income Arkansans, paid for by tax increases on tobacco products.

The legislation would achieve the income tax cut by creating a refundable state earned income tax credit; increasing the standard deduction; and eliminating a bracket in the tax table for people with incomes up to $22,200 a year.

The bill's next hurdle is the House Revenue and Taxation Committee, which is chaired by Rep. Joe Jett, R-Success, who opposes the bill.

"Every dime that is collected in any taxes is returned to the taxpayers, period," under his bill, Hendren said in making his pitch to senators.

"The whole purpose of the [earned income tax credit] trust fund is to make sure that there is a place to collect the revenue so that it can then be redistributed in a responsible way back to taxpayers," he said.

"That means everybody else is paying a half-billion dollars in taxes to compensate for the cost of health care directly related to the use of tobacco," he said.

"We are one of the most unhealthy states. We have higher rates of tobacco use than the national average. What is going on in our schools with vaping is astounding and somewhat terrifying in talking with administrators," Hendren said.

"I would argue it is time to rearrange the deck chairs," he said.

But Sen. Trent Garner, R-El Dorado, who voted against the bill, told his colleagues that "this is a redistribution of wealth from all to a few.

"This is a bad policy. This will hurt the people we are claiming that we care about," he said.

Garner said the state's cigarette taxes will be higher in Arkansas than in Louisiana.

"Who do you think that is going to affect?" he asked.

According to the Tax Foundation, excise taxes on cigarettes are $2.03 per pack in Oklahoma, $1.41 in Texas, $1.08 in Louisiana, 68 cents in Mississippi, 62 cents in Tennessee and 17 cents in Missouri.

Sen. Bob Ballinger, R-Hindsville, who voted against the bill, told senators that the cost to the state's Medicaid program from eating cheeseburgers and soda is more than the costs from vaping.

But Hendren said it's" ludicrous" to compare the amount of health care costs associated with cheeseburgers to lung cancer, nicotine and addicted products.

Sen. Missy Irvin, R-Mountain View, who voted for the bill, said she is incredibly alarmed about the growing epidemic of vaping in the schools.

According to the state Department of Finance and Administration, SB571 would:

About 300,000 Arkansans have claimed a federal earned income tax credit in each of the past five years.

• Eliminate the 2 percent individual income tax rate for taxable income of $4,500 to $8,899 for people with taxable income of $22,200, effective for tax years beginning on or after Jan. 1, 2020, which would reduce revenue by $16.7 million a year, according to the finance department.

• Levy a new special excise tax on cigarettes sold in Arkansas of 20 percent of the retail price collected by the retailer at the time of sales to the consumer. The tax would become effective Sept. 1.

• Levy a new e-cigarette privilege tax at the rate of 68 percent of the selling price from the manufacturer or wholesaler to the retailer on e-cigarettes sold in the state. E-cigarettes include vaping products or an e-liquid product. That tax also would take effect Sept. 1.

Asked about the prospects for the bill in the House, Hendren said "I think it's a challenge.

"If was easy, anybody would do it, so it is not going to be easy and it is going to be an uphill climb. But it is not impossible. I wouldn't have filed it if I thought it was impossible," he told reporters.

Hendren said he'll most likely present the bill to a House committee in two weeks. The Legislature returns Monday.

"It may take another week for us to fully have any kind of discussions about potential compromises," he said.

The next hurdle for the bill is the House Revenue and Taxation Committee, whose chairman, Jett, and a key committee member Rep. Lane Jean, R-Magnolia, have signaled their opposition to the bill.

"This [bill] kind of fell out of the sky on me two or three weeks ago," Jett said Wednesday night.

He said he hasn't been involved in discussions about a potential compromise.

House Speaker Matthew Shepherd, R-El Dorado, assigned the bill to "Rev and Tax due to the scope and length of the bill," House spokeswoman Cecillea Pond-Mayo said in a text message to this newspaper. Another option would have been the House Rules Committee, which often considers tobacco legislation.

The bill's House sponsor is Rep. Lee Johnson, R-Greenwood. The bill has 39 co-sponsors in the House.

Gov. Asa Hutchinson, who hasn't taken a position on Hendren's legislation, had no additional comment about the bill on Wednesday, said his spokesman, J.R. Davis.

Last week, the governor said he appreciated the effort by Hendren and the bill's other sponsors to provide tax relief to those with lower incomes, like the state did in 2017, and it's important that any more tax relief be offset on the revenue side. The governor is Hendren's uncle.

Last month, the governor signed into law legislation that would implement his plan to trim the state's top individual income tax rate from 6.9 percent to 5.9 percent over a two-year period. The tax cut is projected by state officials to reduce state tax revenue by $97 million a year after it's fully implemented.

Hutchinson last week signed legislation that would raise about $95 million a year more for the state Department of Transportation for highways by imposing a wholesales tax on gas and diesel fuel, increasing fees for electric and hybrid vehicles, and tapping casino tax revenues or other state funds.