Arkansan 'angel mom' at Trump’s side in border efforts; her son killed in wreck caused by person who was in U.S. illegally 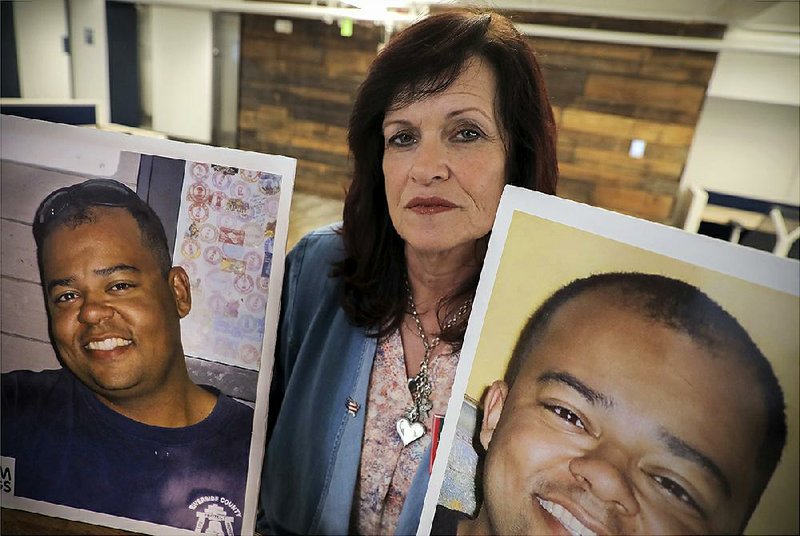 Sabine Durden of Mineral Springs holds photos of her son Dominic, who was killed by a driver in the country illegally. Durden attended a White House ceremony in which President Donald Trump vetoed a measure to overturn his border emergency declaration.

After vetoing a measure this month that would’ve overturned his border emergency declaration, President Donald Trump handed the pen to a Howard County woman who has helped him campaign for heightened border security.

Sabine Durden of Mineral Springs is, in Trump’s words, an “angel mom.” Her son, Dominic, died on July 12, 2012, in an accident caused by a person who was in the country illegally.

The 30-year-old Riverside County, Calif., sheriff’s office dispatcher, who flew planes and rode motorcycles in his spare time, was Durden’s only child.

“We were best of friends. We were each other’s rock,” Durden, an immigrant from Germany, recalled. “He was a proud mama’s boy.”

Juan Zacarias Tzun was an unlicensed driver from Guatemala with two drunken-driving arrests and a grand theft felony conviction. He was on probation when he turned left in front of Durden’s motorcycle.

The accident, in Moreno Valley, Calif., claimed the life of the city’s former volunteer of the year. Hundreds of friends and co-workers attended his funeral, according to newspaper reports at the time.

Since Dominic’s death, his mother has campaigned for stricter border control and tougher penalties for migrants who commit crimes while in the country illegally.

On June 16, 2015, the day Trump declared his candidacy for president, he questioned the caliber of those crossing the southern border, telling the crowd that “the U.S. has become a dumping ground for everybody else’s problems.”

Trump’s promise to stop illegal immigration resonated with Durden, who was still reeling from the loss of her son.

“My depression started hitting me hard and I contemplated suicide. I knew exactly what I wanted to do, how I was going to do it,” she said.

Her plans changed after she watched Trump’s campaign kickoff on television, she said.

A month later, she was invited to meet with the New York businessman to share her story. Other parents who had lost children at the hands of migrants were also on hand.

They were ushered into a room to meet with Trump.

“No media, no bodyguards, nobody,” she said. “He walked in and greeted us, hugged us and sat with us for an hour and a half and listened to our story. He cried with us. He laughed with us.”

Afterward, the candidate invited them to speak with reporters who had assembled outside. “One by one, we each got to share our story,” she said.

Somehow, she said, the words came.

“The weirdest part is I used to be deathly afraid of public speaking. Of microphones. I just couldn’t do it. I would freeze up and start sweating,” she said.

Standing on the podium, “I felt Dominic behind me, just holding me up. … He whispered in my ear: ‘Mom, you’ve got this. Just tell them our story.’ And I did and it changed [my life] forever,” she said.

She got a call, before she’d even left the hotel, inviting her to appear on CNN. After that, the invitations kept coming.

The Trump campaign welcomed her to a rally in Costa Mesa, Calif., and then a town hall-style meeting in Austin, Texas.

In Cleveland, she addressed the Republican National Convention and a national audience of millions. In Las Vegas, she witnessed the final presidential debate between Trump and Democrat Hillary Clinton.

Since the election, Trump has continued to call on her as he campaigns for bigger walls and tougher border security.

“Sabine’s story is not only incredibly moving but also empowering,” a White House official said.

With Trump as president, there are numerous opportunities for Durden to tell it. She attended the inauguration and has been to the Oval Office numerous times. She’s met with Vice President Mike Pence and then-Attorney General Jeff Sessions.

Shortly after Trump took office, Durden moved from the Golden State to the Natural State.

“After Dominic’s death, California just triggered the memory. It was killing me slowly,” she said.

Her f iance, Anthony Coulter, had family in the area and suggested the move.

Arkansas has been good for her, she said.

“I love it. I absolutely love it. It reminds me of Germany with all the green and the beauty around it. The peacefulness is what I needed,” she said. “Going out to D.C., going to all over America to talk, I get to come home and just sit and hear nothing but some birds and some cows.”

Critics have accused Trump of using “angel moms” as props.

“He remembers Dominic. He calls me ‘Dom’s mom.’ He pays attention. He looks you straight in the face,” she said.

“I get it that people don’t like him and don’t agree with him, and that’s all good. That’s everybody’s right,” she said. “But he gave Dominic and me a voice that nobody else did.”

And when Trump vetoed the measure earlier this month, he handed her the pen the moment he’d added his name.

On Tuesday, the president sent her a letter, signed with his own hand.

“No family should have to endure the tragic death of a loved one at the hands of a criminal illegal alien,” he wrote. “In memory of your beloved son, Dominic, and all those who have lost their lives to this senseless violence, I pledge to continue to act with steadfast resolve to confront the humanitarian crisis at our dangerous southern border.

“Mothers like you are examples of unbreakable strength in the aftermath of heartbreaking pain,” it said.

At the end, the word “Sincerely” had been crossed out. In its place, the president had written, “Love, Donald Trump.”

The 30-year-old Riverside County, Calif., sheriff’s office dispatcher, who flew planes and rode motorcycles in his spare time, was Durden’s only child.