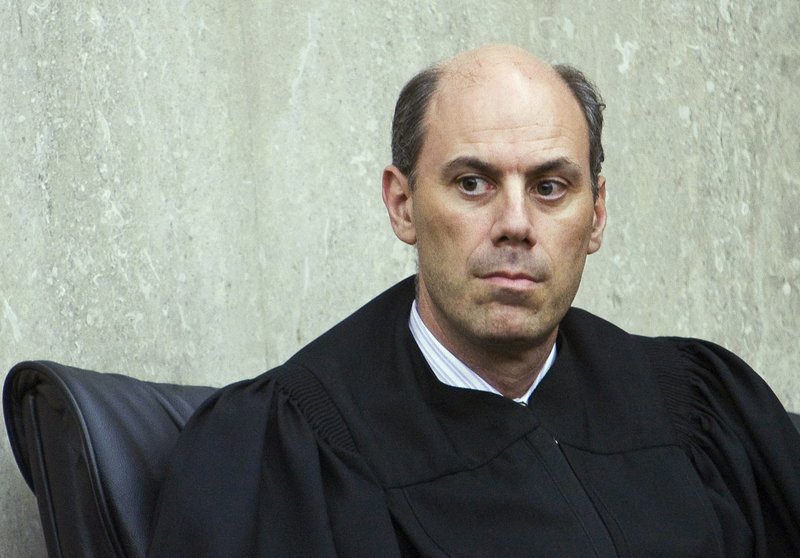 A federal judge Wednesday struck down Medicaid work requirements in Arkansas and Kentucky, saying President Donald Trump's administration, in approving the requirements, had failed to consider the effect they would have on the program's goal of providing health coverage to needy people.

In a pair of rulings in Washington, D.C., U.S. District Judge James Boasberg vacated the Trump administration's approval of the requirements in both states and sent them back to U.S. Health and Human Services Secretary Alex Azar for further review.

Neither the Trump administration nor Arkansas Gov. Asa Hutchinson said whether they would appeal the ruling.

Hutchinson said in a statement that he was "disappointed in the decision" and would discuss it and the "future of the Arkansas Works work requirement" at a news conference today.

Federal Centers for Medicare and Medicaid Services Administrator Seema Verma said the administration would "continue to defend our efforts to give states greater flexibility to help low-income Americans rise out of poverty."

"We believe, as have numerous past Administrations, that states are the laboratories of democracy, and we will vigorously support their innovative, state-driven efforts to develop and test reforms that will advance the objectives of the Medicaid program," Verma said in a statement.

Kevin De Liban, an attorney with Legal Aid of Arkansas, said the ruling blocks Arkansas from kicking more enrollees off the program for noncompliance.

From June through January, 18,164 enrollees lost their coverage after incurring three months of noncompliance in 2018. Those who lost coverage were eligible to re-enroll at the start of the year.

"What this means is that 180,000 Arkansans can go to sleep tonight knowing their coverage is safe, that they can have health care, and that they're not going to lose it because of these illegal and harmful termination traps," he said.

The Jonesboro-based group is one of three organizations that filed the lawsuit in August on behalf of several Arkansas Works enrollees.

Two of the same groups, the National Health Law Program and the Southern Poverty Law Center, also represented the plaintiffs in the Kentucky case.

Arkansas Attorney General Leslie Rutledge agreed that the ruling means additional Arkansas Works enrollees can't be terminated from the program for failing to spend 80 hours a month on work or other approved activities.

In a statement, she said she was reviewing the decision and "coordinating with state and federal officials to determine the appropriate course of action."

Arkansas lawmakers learned of the ruling just after the state Senate, in a 27-4 vote, approved Senate Bill 99, which authorizes spending on the state Medicaid program, including Arkansas Works, for the fiscal year that starts July 1.

Some lawmakers had argued for a delay in considering the bill until Boasberg issued his ruling.

The earliest it could vote on SB99 is Tuesday, unless House Speaker Matthew Shepherd, R-El Dorado, decides otherwise, he said.

Shepherd said in a statement that he would review the judge's decision and consult with Hutchinson, the state Department of Human Services and legislative leaders on whether "any changes should be considered in how the House proceeds."

Spending bills require the approval of three-fourths of the members of each chamber of the Legislature, meaning SB99 will need 75 votes in the 100-member House.

Meeting the threshold has at times been difficult since Medicaid expansion was first approved by the Republican-controlled Legislature in 2013.

If that's not possible, "we'll look at other ways to continue to make the program sustainable," he said.

"I don't think [the ruling] is going to mean an immediate unraveling of the program," he said.

"I'll definitely be looking at it a little harder now that the requirement has been removed," he said.

Arkansas Works covers Arkansans who became eligible for Medicaid through the expansion, under the 2010 Patient Protection and Affordable Care Act, that extended eligibility to adults with incomes of up to 138 percent of the poverty level.

More than 235,000 Arkansans were enrolled in the program as of March 1.

The program's work requirement took effect in June, making Arkansas the first state in the more than 50-year history of the Medicaid program to implement such a requirement for some of its enrollees.

Kentucky's requirement had been scheduled to start next month.

To keep their coverage, Arkansas Works enrollees were required to report on their activities or exemption status using a state website or over the phone, an option that was added in December.

Enrollees who failed to meet the work requirement for three months during a year were terminated from the program and barred from re-enrolling for the rest of the year.

The requirement was phased in last year and in January for enrollees ages 30-49, and was being added this year for those ages 19-29.

Earlier this month, the state reported that 6,472 failed to comply with the requirement in January and February and would lose coverage Monday unless they report the required number of hours or an exemption for March.

In his ruling, Boasberg said Verma's March 5, 2018, letter approving Arkansas' requirement failed to adequately respond to concerns expressed during a public comment period on the coverage losses that would result.

The letter granted Arkansas' request to implement the work requirement through a waiver from federal Medicaid law under Section 1115 of the Social Security Act.

That section authorizes waivers that the Health and Human Services secretary determines are "likely to assist in promoting the objectives" of the Medicaid program, Boasberg noted.

He rejected an argument by Trump administration attorneys that the work requirement would strengthen the financial sustainability of the Arkansas' Medicaid program, noting that that rationale wasn't mentioned in the approval letter.

He noted that, as of October, only about 12 percent of enrollees who weren't exempt from the work requirement had "reported any kind of qualifying activity" and that it's unknown "what percentage of these individuals completed the work requirement but did not report versus those who did not engage in the work itself."

On the same grounds that he rejected to the work requirement, Boasberg also rescinded the Trump administration's decision allowing Arkansas to reduce from 90 days to 30 days the amount of past medical expenses the Medicaid program will pay for new Arkansas Works enrollees.

Boasberg had once before, in June, stopped Kentucky's work requirement from taking effect, citing the same deficiencies in the Trump administration's approval of the requirement as he did in Wednesday's rulings.

In response to the June ruling, the Health and Human Services Administration solicited additional comments on the Kentucky plan and in November issued a new approval letter.

In rejecting the new approval Wednesday, Boasberg said the same reasoning could be used to justify any change to a state's Medicaid program.

"Could a state decide it did not wish to cover pregnant women? The blind? All but 100 people currently on its Medicaid rolls?" Boasberg said in the ruling. "[Azar] offers no reason that his position would not allow for any of those results."

In addition to Arkansas and Kentucky, five other states have received the Trump administration's approval to add work requirements to their Medicaid programs. New Hampshire's requirement, which took effect this month, is being challenged in a lawsuit filed last week.

Eight other states had submitted applications as of March 14 to add the requirements, according to The Commonwealth Fund, a New York City-based health policy research organization

U.S. Rep. Steve Womack of Rogers called Wednesday's ruling on Arkansas' requirement "another example of an activist, liberal judge trying to legislate from the bench."

"This is about creating a system that not only helps those when they hit tough times, but also encourages them to get back on their feet," Womack said in a statement. "I hope this misguided decision will be overturned."

Rich Huddleston, director of Arkansas Advocates for Children and Families, said the ruling ends a "burdensome process that put up administrative barriers but did nothing to support or incentivize work."

"If we truly want to encourage work, we need to stop efforts to take away health insurance from people who need it and look at policies that improve our economy, provide more jobs at a livable wage, and help train people for those jobs," Huddleston said in a statement.