One of 2 bills to aid Arkansas students advances 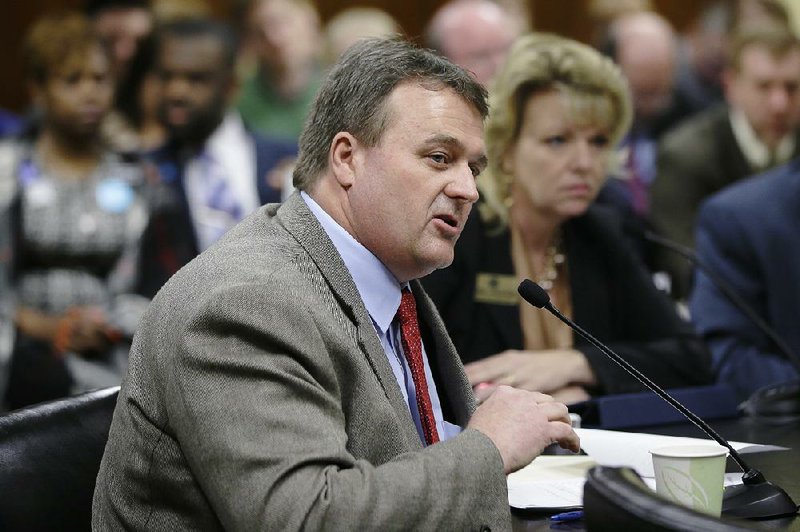 Sen. Blake Johnson, R-Corning, is shown in this file photo.

The Senate Revenue and Taxation Committee's support for the $3 million tax-credit scholarship fund proposed in Senate Bill 539 by Sen. Blake Johnson, R-Corning, sent interested parties into confusion Wednesday because most had been focused on a different voucher proposal in another committee.

That separate proposal -- Senate Bill 620, also by Johnson and backed by Gov. Asa Hutchinson -- had dominated debate around the state Capitol over the past week. SB620 proposes creating a pilot private-school scholarship program for low-income students in Pulaski County. That bill is in the Senate Education Committee, which, like the Senate Revenue and Taxation Committee, met Wednesday morning.

Johnson said Wednesday that he doesn't plan to offer SB620 unless SB539 fails to pass.

Johnson decided to present SB539 to the Senate Revenue and Taxation Committee. The move caused a commotion as superintendents, teacher groups and other interested parties hurried from the Senate Education Committee, where many were waiting to hear SB620.

SB539 was introduced March 12, but the bill's House and Senate sponsors introduced SB620 after consulting with Hutchinson on the issue.

Hutchinson announced the filing of SB620 in a news release last week, and he made the case for the legislation in a Monday meeting with reporters.

A representative from the Arkansas Department of Finance and Administration signed up to speak against SB539 Wednesday morning, but when it was his turn to speak, he told the committee that he had been informed by the governor's office that it was now supportive of the bill.

Hutchinson, through a spokesman, confirmed that the Republican governor supports both bills.

"I fully support the passage of a school choice demonstration project this session, be it SB620 or SB539," Hutchinson said in a statement. "My preference is for SB620 and the Pulaski County option, but we will see which bill receives the most consensus from the Legislature. Right now there are two options for the General Assembly to consider."

SB539 would offer dollar-for-dollar income-tax credits to individuals and corporations making donations to help kindergarten-through-12th-grade students attend private school. Those tax credits may be used to offset all of the income tax due in a given year for individual taxpayers, according to the Department of Finance and Administration.

Unused credits could be carried forward up to five years.

The program would be capped at $3 million every year, providing education vouchers to about 400 students. Both the scholarships and the tax credits would be available on a first-come, first-served basis, Johnson said.

"Anybody can participate that owes income taxes to the state of Arkansas," Johnson said. "They can direct those funds to education."

The private-school scholarships under SB539 could equal the state's per-student funding rate for public school pupils ($6,781 this school year). The vouchers would be available to students whose families make no more than 150 percent of the amount that qualifies a child for federal school lunch buying assistance ($69,653 for a family of four).

Students from military families, foster children and students with disabilities would also qualify for the program.

The scholarships would be administered through nonprofit organizations that may allocate up to 10 percent of the donated funds to administrative costs. The organizations would not be allowed to charge application fees to students, and they'd be barred from steering students toward or away from certain schools.

Donors would also be unable to designate contributions for particular students or schools.

The funds, under the bill, may be spent on tuition, books, tutoring, standardized tests and other approved education costs.

Private schools may participate in the program if they meet accreditation requirements or are in the accreditation process before the state Board of Education, the Arkansas Nonpublic School Accrediting Association Inc. or another accrediting association recognized by the state.

Paul Gehring, assistant commissioner of the finance department, told the committee that the tax-credit scholarship program had not been accounted for in the governor's proposed budget, but that Hutchinson supported finding a way to include it.

Both the state's largest teachers and administrator groups spoke against SB539 on Wednesday. Richard Abernathy, director of the Arkansas Association of Educational Administrators, said the group opposes voucherlike programs because it sends public dollars to private institutions without proper accountability.

"So you're arguing that the parents who are going to take advantage of this credit, who actually know their kids, see them every day, would be less accountable than a school district of people who aren't their immediate family?" Garner said.

"I'm saying when you're using state dollars to educate kids there should be accountability back to the state," Abernathy replied.

A parent of three children -- two of whom have learning disabilities -- spoke in support of the bill.

Johnson, the sponsor, said after the meeting that he decided to present SB539 after concerns were raised about the narrow scope of SB620. That bill would only affect low-income students in Pulaski County. It would be a five-year pilot program paid for by $3.5 million annually from the governor's discretionary funds.

"But those kids [in Pulaski County] can still use this program," Johnson said, referring to SB539.

Johnson also noted that SB539 was introduced earlier in the session.

Several senators on the Revenue and Taxation Committee were confused about the differences between Johnson's two bills, and Sen. Joyce Elliott, D-Little Rock, the vice chairman of the Senate Education Committee and a vocal opponent of voucher programs, said Wednesday that she was still trying to discern what had occurred.

"This is a total lack of transparency," Elliott said. "I don't know where we are."

Sen. Jonathan Dismang, R-Searcy, the Senate Revenue and Taxation Committee chairman, typically informs those in attendance of what bills will be heard at the start of a meeting. He did not list SB539 on Wednesday, but he offered the committee several opportunities to delay consideration of the bill after Johnson decided to present the legislation.

After it passed, Dismang said, "All I can say is we're not going to do it this way again."

Senate President Pro Tempore Jim Hendren, R-Sulphur Springs, said lawmakers must decide which of the two scholarship programs they prefer. Hendren is a co-sponsor of SB539.

"Both will compete in the capital of ideas, and we'll see which one wins," Hendren said.

Print Headline: One of 2 bills to aid Arkansas students advances