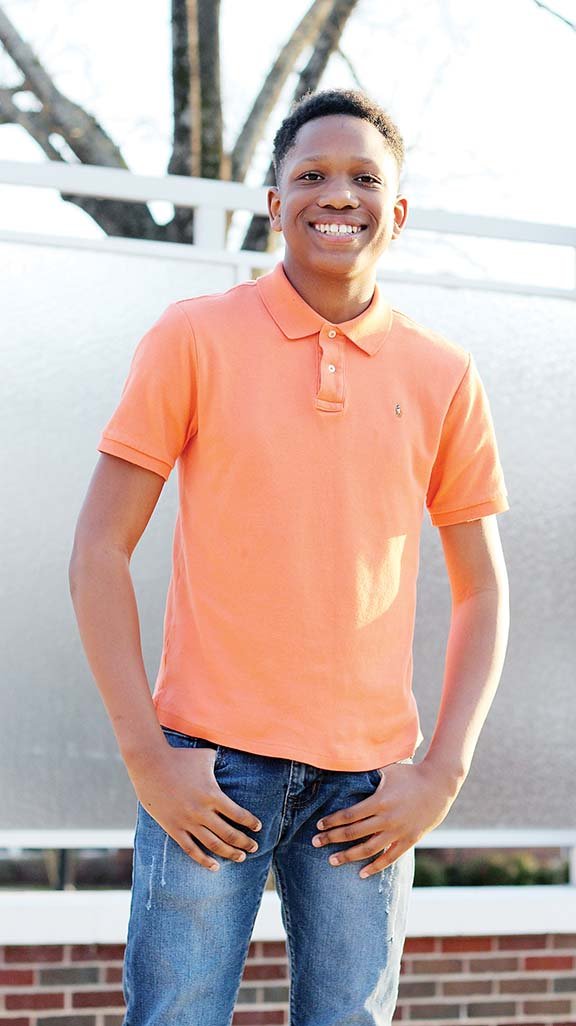 Aidan Eslinger stands upon an outdoor stage as a reflection of his work on numerous stages. It was his passion for theater that led Aidan to help his community through plays, books and now a tutoring program.

CONWAY — Aidan Eslinger is a typical teenager. He goes to school, plays basketball and was elected president of the Student Council. However, what sets Aidan apart from other teenagers isn’t just that he’s written, directed and performed in numerous plays and published his first book at age 11. It’s that he is working with a middle school, at the age of 13, to create a tutoring program that helps minority students better prepare for the ACT Aspire test.

“I wanted to start a tutoring program for African-American males to help raise their academic test scores so we could close the gap between them and other races,” Aidan said. “It’s because many of the African-American students don’t have the resources or the role models to excel in academics.”

At the end of April, Aidan began tutoring at Carl Stuart Middle School, with a focus on prepping students for at least two weeks before testing for the ACT Aspire begins. This pilot program is in partnership with the middle school, with Aidan providing incentives and door prizes for the students who attend. More than 40 students participated in the first tutoring session, and Aidan donated almost $200 in gift cards to the students.

“The tutoring program was a success. I am very happy that we partnered with Carl Stuart,” Aidan said. “In my experience, being prepared and familiar with the test and test-taking strategies is the key to performing well on the test.”

Chris Barnes, principal of Carl Stuart Middle School, said he wants to close the gap in each section by at least 10 percent for the 2019-2020 school year.

“As part of our school-improvement process, we are trying to find ways to positively impact the performance gaps we are seeing,” Barnes said.

Carl Stuart aims to narrow these performance gaps between the groups by bolstering participation in the Strive for 25 Reading Initiative, placing greater emphasis on male students, and using faculty book studies titled Focus, by Mike Schmoker, and Mindsets in the Classroom, by Mary Cay Ricci.

“I shared this information with Aidan and his mother, and they began to think of ways they could help support us in our efforts, both in the short-term and in the long-term,” Barnes said. “Hopefully, with some of the interventions we are planning and with some incentive support provided by Aidan and others, we can work to close these performance gaps.”

It is Aidan’s goal not only to help his fellow students but to help his community, emphasizing the need to have minorities in a main-role capacity in the community. That aim has led him not only to start a tutoring program but to write books and plays that echo that purpose.

His first book, The Colorful Sky, has a minority character in the main role. Aidan began working on the book when he was 5, and after many revisions and a successful Kickstarter campaign that raised more than $1,500, Aidan self-published The Colorful Sky in February 2017, when he was 11.

The book’s main character, Justin, loses the juice he was taking to a friend’s sleepover, and something crazy ends up happening the next day.

Since the book’s publication, Aidan has had book signings in Conway, West Memphis, Jonesboro and other locations. He often goes to schools in his area and those that were on his book tour and reads the book to children, for whom it was written. He recently visited Simon Middle School in Conway and, at press time, was planning a visit to Toad Suck Daze.

“Mr. Aidan Eslinger, seventh-grade author and playwright, came [to our school] as a guest speaker,” said Janie Walburn, sixth-grade literacy/social studies teacher at Simon Middle School. “He provided encouragement, inspiration and motivation to be whom you choose to be in this world. He shared his experiences as a published author and as a student of the Conway Public Schools. He is sure to achieve greatness in the world.”

In his future works, besides using minorities in main roles, Aidan said he wants to focus on an underlying theme of finding the root of a problem, then revealing a solution to it.

His next book, What I Can Be From A-Z, showcases young minority characters who realize that they can pursue careers beyond basic stereotypical ones. The book is currently being illustrated, with plans for it to be released at the end of the summer.

“This is a way of expressing what I believe and what I want to say,” Aidan said. “I’m just trying to continue to develop and get better and continue to be an inspiration to people all over the world.”

Aidan has also just finished writing a 102-page play that is undergoing editing. Aidan’s passion for helping his community and finding an outlet to express his thoughts came from plays and acting in the theater, he said.

“When I was 8 years old, I tried out for a play and was rejected,” Aidan said. “I was refused the role I wanted.”

It was from this rejection that Aidan wrote his first play, 13 pages long, called Steve Comes Home, that was performed in his church. In March 2016, he wrote, directed and produced the play Grandma’s Easter, an 80-page play that was produced in two cities at churches for Easter weekend.

Sister Secrets is an adult stage play about five sisters and their mother, who run a hair salon. Mama has an unexpected tragic event and asks her five daughters to keep her hair salon up and running. In order for the sisters to fulfill her wish, they must deal with past issues, reveal their darkest secrets and try to forgive one another.

Aidan said his success has been possible through the support of his family and community.

“It’s not just me; it’s my team — my mom, my aunts, my family, my cast. It blew me away at what we were able to accomplish and how much joy we were able to bring people,” Aidan said. “I thank God for the chance I have to continue to grow.”

Aidan said he plans to continue to expand his company, with the help of his parents and his sister, Ariah, 8, to help those he can in his community.

Aidan had another affirmation of his accomplishments at the Conway Connects: Minority Entrepreneur Night, where he won the People’s Choice Award and $500 to help fund his company’s mission. Aidan and the other participants had one minute to get onstage and pitch his production company’s plans for the future. He talked about his plays, his books and continuing his work through his tutoring program.

“You have a 13-year-old Aidan Eslinger who wins the People’s Choice Award. Wow,” said Jimmy D. Warren II, a community activist and the host of the Minority Entrepreneur Night. “I’ve seen Aidan’s work in the community with productions of shows and a passion for the arts. He is an amazing talent, and I believe this award is proof of people seeing that talent, and hopefully, it will serve as motivation to achieve even more.”

Aidan’s parents, Nadia and Lamar Eslinger, relocated to Conway in 2015 when Nadia, a University of Central Arkansas alum, was hired as an academic adviser at the university.

Aidan Eslinger Productions can be found on Facebook or online at aidaneslinger.com. Aidan invites those who wish to donate or volunteer to contact him via Facebook or his Web page. To volunteer at Carl Stuart Middle School, call the main office at (501) 329-2782.