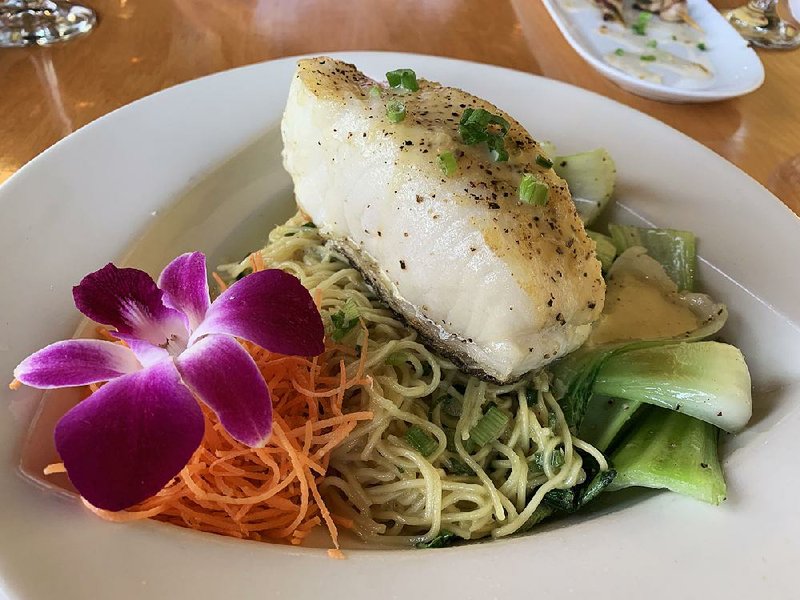 Very little has changed at Kemuri sushi, seafood, robata since it changed hands around the first of the year.

Former owner Jerry Barakat had plenty on his, er, plate with the opening of his two principal restaurants, Arthur's Prime Steakhouse and Oceans at Arthur's, side-by-side in new, expanded quarters in a former dual auto dealership on Chenal Parkway. The departure homeward to Sri Lanka of his right-hand man and major domo, Manjeev Demel, made it a lot harder to juggle both those projects and the third restaurant, so something had to go. Kemuri was it. 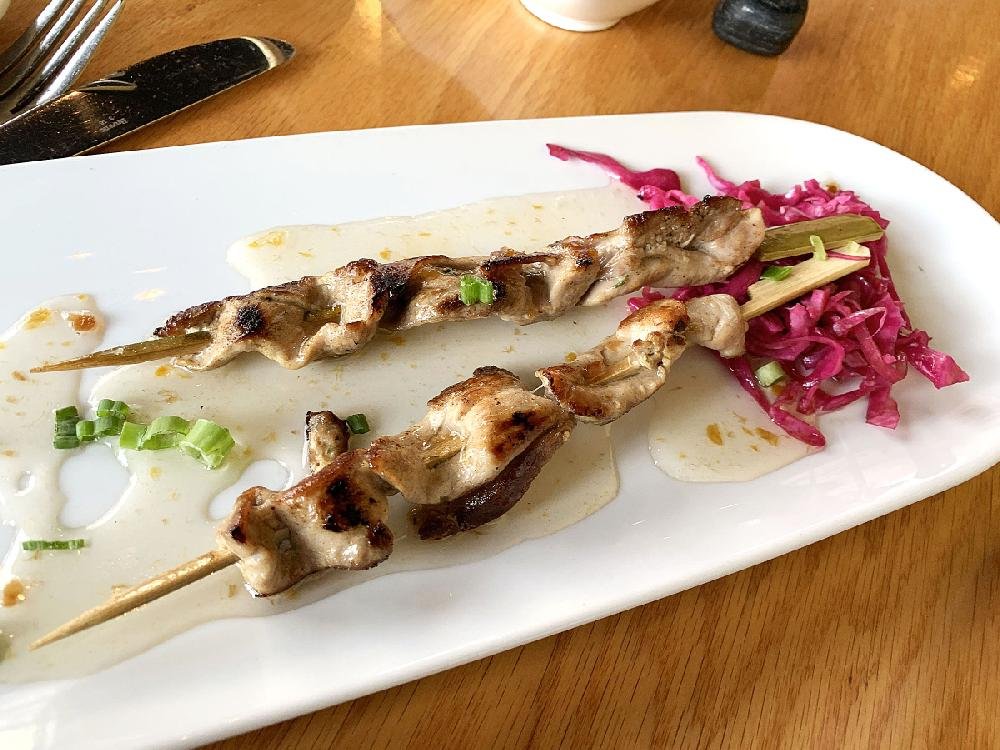 Skewered chicken in ssamjang sauce is one of the robata items at Kemuri.

New owners Dr. Meraj Siddiqui, co-founder of Pain Treatment Centers of America, and his colleague Dr. Ahmad Rafi, are medical men and have not previously been restaurateurs, but by their own assertion they know a good investment when they see one. And Kemuri has been a Hillcrest success story since Barakat opened it in August 2014 in the Ice House Center space, which has been home to more than a dozen more but mostly less successful places (Ferneau more; Rocket 21, its successor, not so much) over more than four decades. 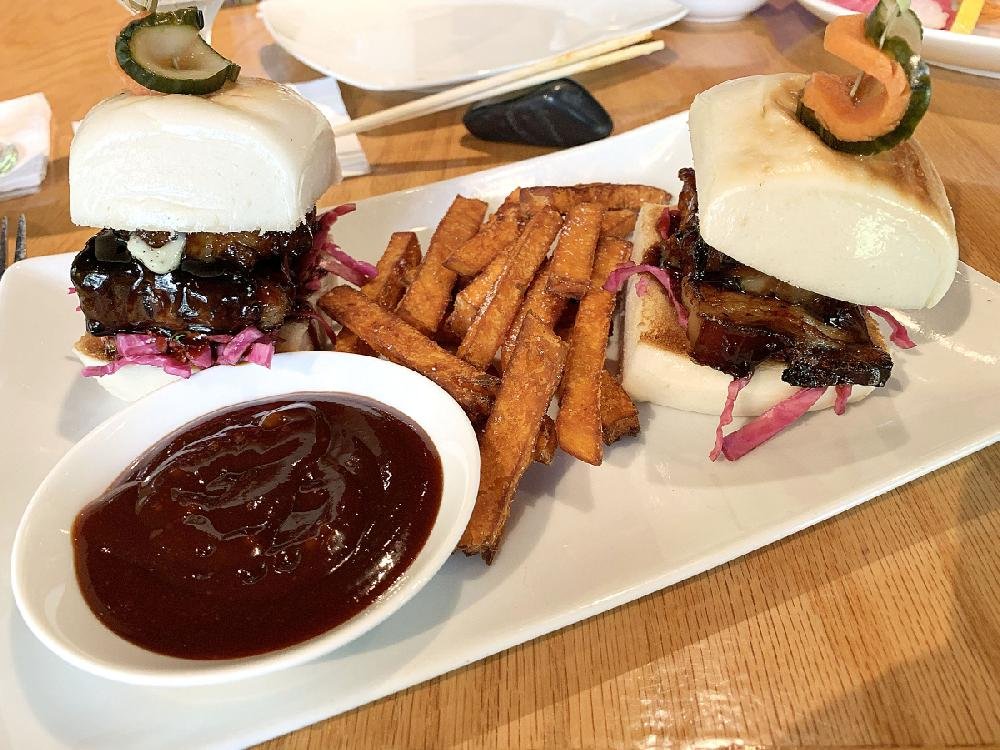 The menu and the staff have held steady; the new owners brought in experienced restaurateur and sometime Barakat associate Dave Bisceglia (who has most recently operated, among other eateries, Dave & Ray's Downtown Diner and Salut Italian Bistro), to manage the place. They've expanded the chef corps, adding Gilbert Alaquinez, formerly the executive chef at the Clinton Presidential Center, to chef/kitchen manager Ricardo Ricon and sushi chef Haidar Assegaf. Expansion of the wine list and some new cocktails are among the perceptible differences.

We encountered a couple of small problems that have nothing to do with the change of administration, but based on a couple of recent lunch and dinner visits, we can safely assert that we enjoyed, and predict you'll enjoy, dining at Kemuri as much as ever.

We were glad to revisit, and can once again definitely recommend, the House Miso Soup ($5), a good-size portion of firmly flavored consomme-style broth with hand-shredded seaweed, irregularly shaped pieces of tofu, scallions and even a few chewy fresh mushrooms. It's head and shoulders above the pale, too-delicate soup one usually encounters at area Asian restaurants, marked by pre-chopped seaweed and factory-diced tofu.

Kemuri splits its small-plate offerings into three categories: cold, hot and robata, the latter involving roasting meat and vegetables over an open flame. We went simple, and enjoyed our Robata Chicken ($6), two skewers of tender bird portions in what the menu says is "ssamjang sauce" -- whatever it is, it's nicely savory.

Our hot plate was another longtime favorite, the entree-size, Thai-accented steamed mussels (up a buck and now $15, but still a bargain), nearly two dozen bivalves steamed with lemon grass in a rich broth of Thai basil, chile and coconut milk. 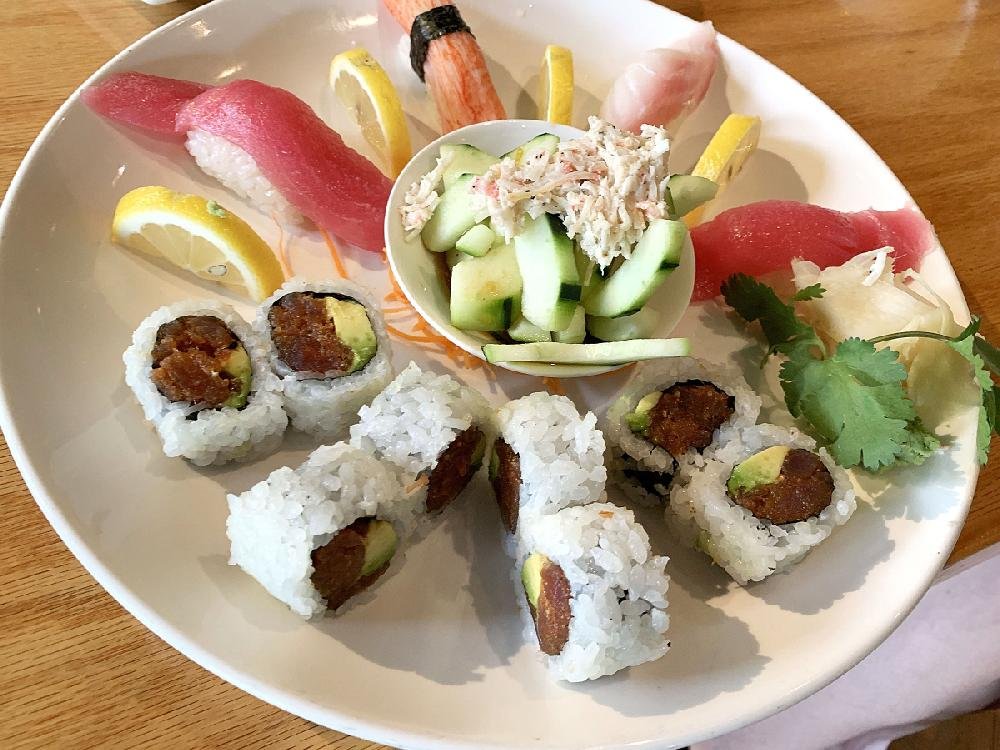 The lunchtime Spicy Tuna Combo pairs a spicy tuna roll with nigiri — in this case, tuna, snapper and surimi with an extra piece of tuna subbing for salmon — and a crab-meat topped cucumber salad.

Our lunchtime Char Siu Pork steamed buns ($10) looked like more fun when it arrived at the table than it turned out to be. It consisted of two fluffy, Asian-style buns, each with a skewer of spicy pickles, framing thick chunks of roasted pork belly and Asian slaw. We made a bit of a mess -- fluids from the pork belly and the slaw dripped out the sides as we picked them up off the plate, and not all of the pork belly was exactly negotiable; a considerable portion of pork belly is, of course, fat, and part of the rim was so inedibly chewy that we had to dispose of it. It comes with a small bowl of tangy ponzu barbecue sauce, the color and consistency of ketchup, that enhanced the meat and also made for good dipping for the sizable pile of crisp sweet potato fries. 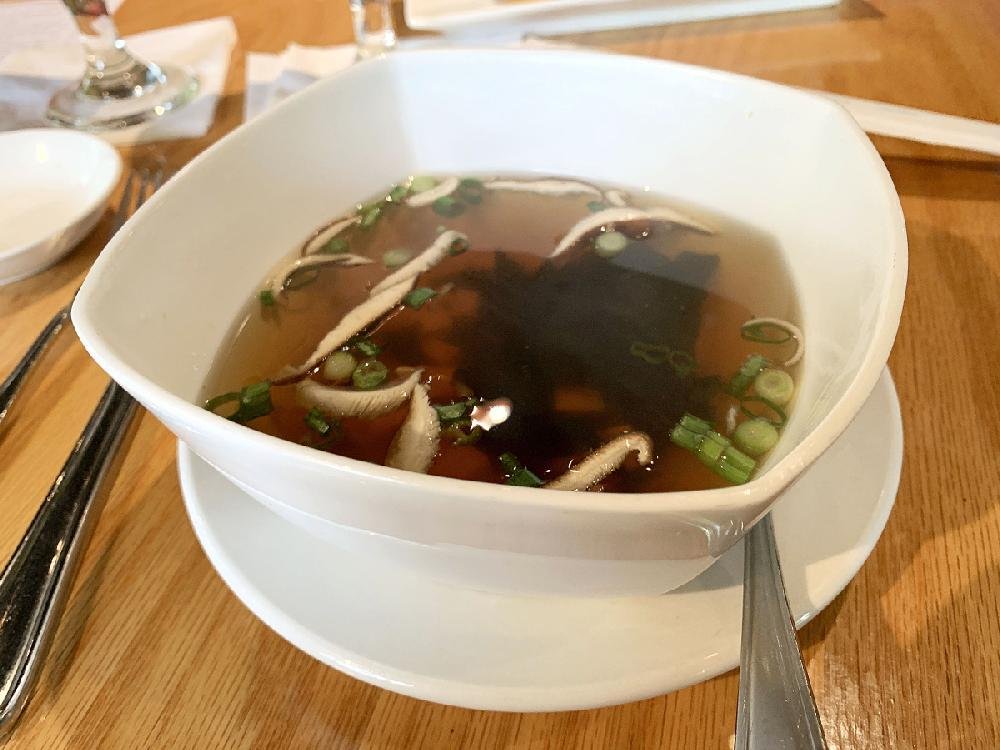 From the sushi bar, we enjoyably splurged on two of Kemuri's "signature & specialty" rolls: The Kemuri Roll ($16), centering on tempura-coated tuna with blue crab meat, cream cheese, mango, jalapeno, avocado, "crab stick" and a bevy (well, three) of sauces; and the Crazy Spider ($15), soft shell crab, spicy tuna, asparagus and cream cheese. Our one complaint: Proper sushi etiquette is that you're supposed to eat each piece of a roll entirely, and Kemuri's sushi rolls are too (expletive deleted) big to do that comfortably.

Intrepid Companion revisited one of her lunchtime favorites, the Spicy Tuna Combo ($12), a spicy tuna roll (Kemuri's spicy tuna has a slightly smoky tang) with a center-plated, crab-meat topped cucumber salad and four pieces of nigiri (that's the raw fish on rice) -- salmon, tuna, snapper and shrimp. Since she's a fan of salmon grilled but not sushi-raw, she satisfactorily substituted an extra piece of tuna; the sushi chef, without explanation, substituted a piece of pseudo-crab surimi (aka "crab stick") for the shrimp. Finding a hair on the roll -- possibly hers, possibly not -- put a quick stop to the mostly already consumed meal. 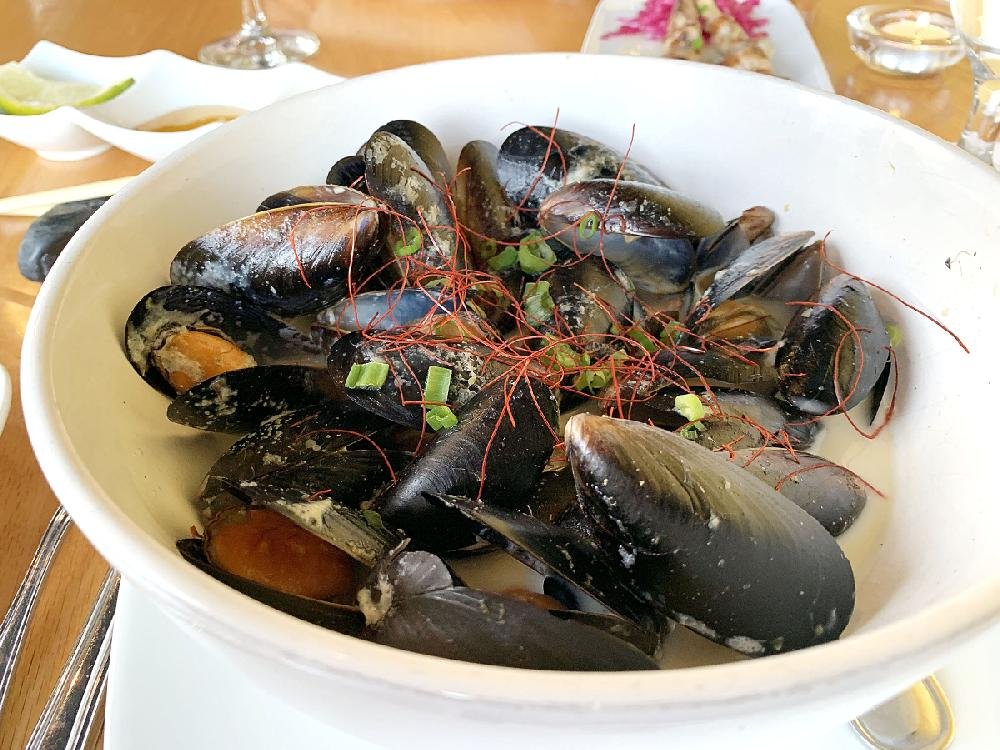 We also splurged on what has so far been the absolute best of Kemuri's dinner entrees, and one of the area's best fish dishes, period: the Chilean sea bass ($29), a sweet, tender, just-right-size portion of tender white fish flesh, served with baby bok choy, a lemon grass vinaigrette and (mmmm!) ginger scallion noodles.

Kemuri's dessert selection is one area where there's been some small changes, with some desserts still being produced in house and some -- including a creamy berry-bedecked cheesecake ($9) being outsourced.

Service has always been one of Barakat's hallmarks, and it continues to be fine, courteous, helpful but never stifling, under the new regime. 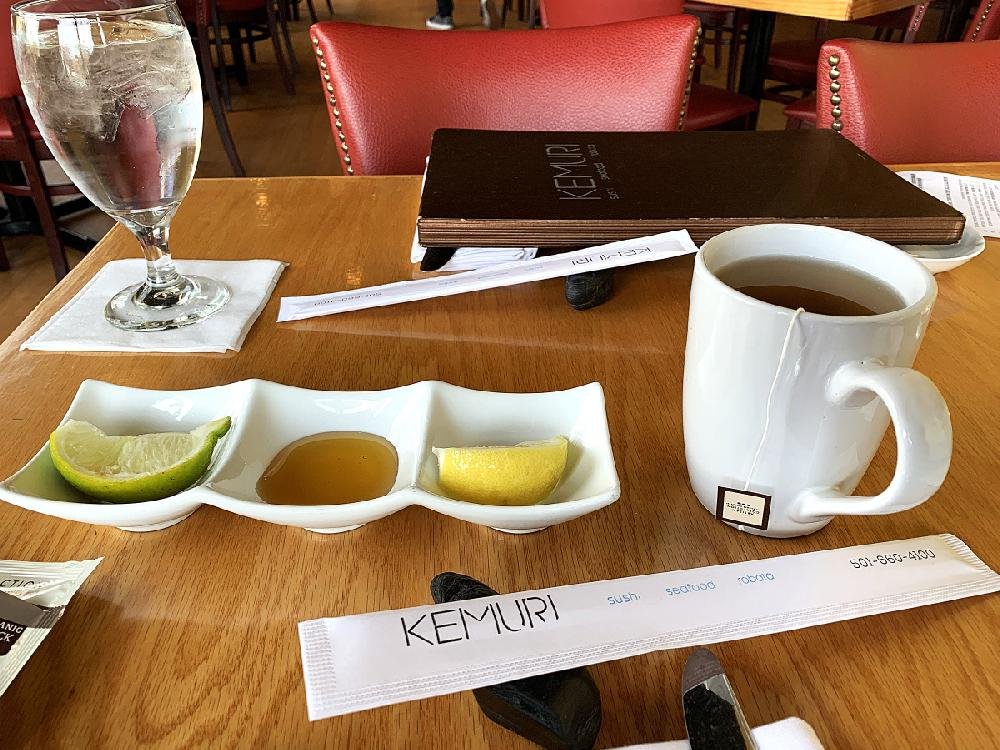 Hot tea at Kemuri involves the customer choosing from a selection of Eastern and Western tea bags; the waiter provides lemon and lime wedges and a small pool of honey.