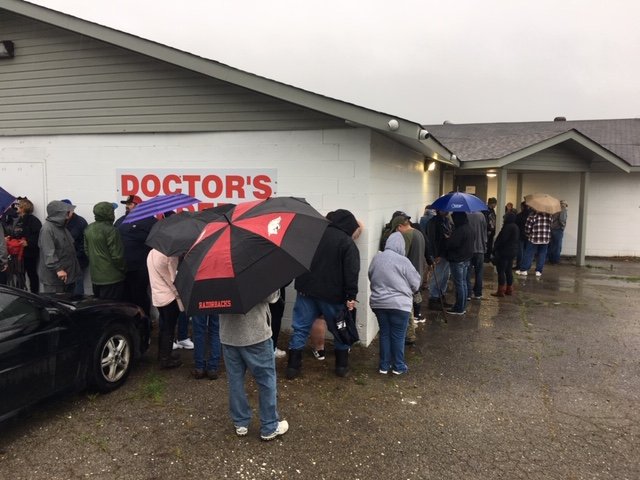 A line of people stand in the rain outside Doctors Orders RX on U.S. 270 east of Hot Springs on Saturday. The dispensary became the first medical marijuana dispensary to serve a patient in Arkansas on Friday, albeit to test software.

After more than two years of litigation and delays, marijuana was sold legally Friday in Arkansas for the first time since the drug was criminalized here in 1923.

Expecting long lines and limited product, the dispensary plans to open its doors to patients from 8 a.m. to 7 p.m. today, a company spokesman said Friday afternoon. Dispensary officials were unsure for much of the day about its opening time because of glitches with the state-mandated tracking software, but it served the first patient once the issues were resolved.

The price of cannabis will range from $395 to $420 an ounce, depending on the retailer. Smaller quantities will be available.

With a limited amount of medical cannabis available at the outset, the drug won't be available to all of the more than 11,000 registered patients in the state, but both companies hope to assist as many patients as possible over the next week.

The prices will be high and the waits may be long, but David Couch, the Little Rock attorney who drafted the constitutional amendment that made Arkansas the 33rd state to legalize medical marijuana, said the first day of sales will be a significant one. He noted that it has been more than 900 days since Arkansans voted to legalize the drug in November 2016, when they approved Amendment 98 to the Arkansas Constitution.

"It's a historical day, a momentous day," Couch said Friday. "Now that patients will actually be getting their medicine, I think people will be happy to see that they're not drugged-out zombies running around like opponents said during the election."

Lawsuits, bureaucratic delays and missed deadlines have plagued the rollout of Arkansas' medical-marijuana program since Amendment 98 was approved.

On Friday, a software snag threatened to further delay Doctors Orders' grand opening. The dispensary was having problems with software required by the state to track medical-marijuana transactions, a company spokesman said, but the problems were resolved before the close of business.

Green Springs Medical received final approval Friday from state regulators to open for business, and it will open at 10 a.m. Monday and close at 8 p.m., Vicentic said. It's at 309 Seneca St. in Hot Springs. 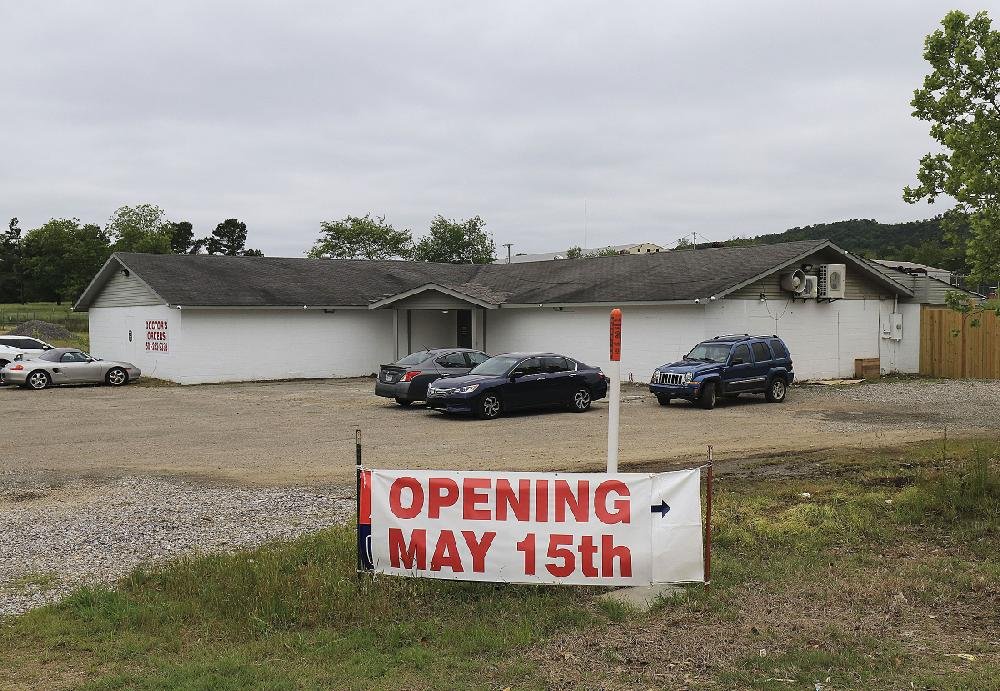 FILE — Doctor's Orders opened in Hot Springs in May 2019.

In addition to the two Garland County retailers, 30 other dispensaries are expected to open for business in the coming months. Those companies are in varying stages of construction and preparation to open.

The drug will be in short supply at the start, but cultivators expect additional harvests in the coming weeks. Prices also will be high at first, but industry leaders expect them to decrease over time, as they have in other states once markets matured.

Bailey Moll, a Doctors Orders spokesman, said the dispensary initially will charge $420 per ounce of dry flower, which is typically purchased in smaller increments like an eighth of an ounce ($52.50). Moll said the company doesn't plan to limit patient purchases beyond the 2.5 ounces allowed every 14 days under state law.

"Patients will be served on a first-come, first-served basis; product availability is limited," Doctors Orders owner Don Sears said in a statement. "We expect long lines and apologize for any inconvenience. However, at this time, processing schedules are unpredictable and out of our control. But we are thrilled to, finally, be able to provide Arkansans with the prescriptions they have waited more than two years to fill."

Green Springs Medical will charge $395 per ounce or $15 per gram, according to Vicentic. He said that patients would be limited to buying no more than a half-ounce of cannabis at first.

"We're trying to make it more readily available for the patients, and thin it out where more people can access it," Vicentic said.

Still, he expects that Green Springs Medical will run out of cannabis in the middle of next week, and it won't have any more until May 20 after it receives its second shipment.

Moll said that Doctors Orders' customers should expect long lines, and that because state law prevents dispensaries from operating beyond certain hours, there's no guarantee that everyone in line will have the chance to purchase the drug.

Vicentic said some patients had already asked him about camping outside the Green Springs Medical dispensary on Sunday evening, so he ordered portable toilets.

"It's going to be kind of like Best Buy before a big Christmas sale I'm afraid," Vicentic said.

While much of the patient community is excited finally to have access to medical cannabis, some are discouraged by the price.

While Arkansas patients will be paying about $50 per one-eighth-ounce of dried flower, patients in Arizona and neighboring Oklahoma can purchase the same amount for nearly $20 less.

However, initial prices in those states mirrored the starting prices in Arkansas, and they decreased as the supplies of the drug increased.

Melissa Fults, a patient advocate, said that many Arkansas patients live on fixed incomes, and they won't be able to afford to pay $50 per one-eighth ounce for medicine, which isn't covered by insurance.

Instead, she said they'll buy a very small quantity from a licensed dispensary to receive the legal packaging. Then, Fults said, those patients will return to buying the drug off the street and disguise it in the previously purchased dispensary packaging to avoid trouble with law enforcement officers.

"That's ridiculous," Fults said of the prices. "They're going to price themselves out of business."

Little Rock Police Department spokesman Lt. Michael Ford said "high-grade" marijuana -- comparable to that available in dispensaries -- can be purchased off the street for $150-$250 per quarter ounce ; "low-grade" marijuana costs $40 to $50 per ounce, he said.

Unlike state-regulated medical marijuana, cannabis purchased off the street -- aside from being illegal -- isn't tested for harmful chemicals and quality.

Late-stage cancer patients who smoke the drug will use a far greater amount than those who use it in edibles, oils, tinctures or ointments, Fults said.