Program focuses on adding females to moviemaking talent pool available in state by Sean Clancy | May 13, 2019 at 4:30 a.m. 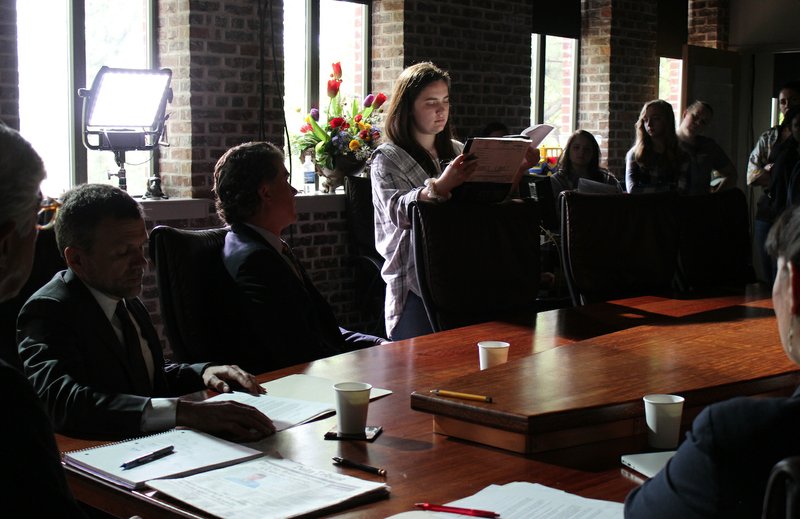 Two women and three men are sitting around a large conference table. They are well dressed and seem to be in the middle of some serious business. The room is a little dark.

One of the men begins to speak to a woman sitting across from him: "Final offer. We'll give you 25% of my client's proceeds. And you will sign a nondisclosure agreement."

She replies: "So you're leaving me with nothing."

Laughter suddenly fills the room and someone yells: "Cut!"

This is the set of Justitia, the second of two short movies filmed over a weekend earlier this month by a crew of 11 high school girls from central Arkansas.

They were taking part in the Arkansas Cinema Society's first Filmmaking Lab for Teen Girls.

Starting March 26, the girls met twice a week to develop scripts, audition actors, film and edit their movies. The final class in the lab is set for Tuesday. Justitia and Ensemble, the other movie created by the teenagers, will debut during Filmland, the Arkansas-based film festival presented by the society Aug. 22-25.

"I actually asked to be the pilot program, but since they are so new they said they weren't ready for that, so we just started our own," Tucker says.

The Little Rock lab, a partnership between the film society, the Women's Foundation of Arkansas — Girls of Promise Initiative and Little Rock production company JM Associates, is an immersive course with girls involved from the earliest stages of movie-making to the final edits and everything in between.

"We did a bunch of research on other labs, and I knew I wanted to take the girls from writing through editing," Tucker says.

She is pretty familiar with the process. Tucker has worked in just about every aspect of filmmaking, from marketing and producing to directing.

A Little Rock native who joined the Directors Guild of America in 2008, Tucker was a second assistant director on Glee, Drag Me to Hell, Gangster Squad, This Is 40 and other projects. She co-produced the films All the Birds Have Flown South and Antiquities, both of which were made in Arkansas, and recently finished directing a one-hour documentary on former Gov. Mike Beebe for AETN.

Of the 100 top grossing films of 2018, only 4% were directed by women, 3% had female cinematographers and just 15% were written by women, according to the Center for the Study of Women in Television and Film.

"There's a tremendous deficit of trained females in the industry," Tucker says. "A lot of people look to Hollywood to lead in that progressive, diverse way, but it's so behind the times."

The girls in the film lab, who are all from different schools, were chosen after submitting two essays; and their ability to attend the program was also a factor.

On the set of Justitia, which was being filmed on the second floor of JM Associates, the crew of girls, accompanied by their adult mentors, discussed script options, lighting choices and camera angles between takes.

Co-director Sophia Mammarelli of Mount St. Mary Academy conferred with Tucker and spoke with the actors (including Tucker's dad, Rett, who was an extra). Behind the camera, Mayhan coached Meeghan Snyder, a 17-going-on-18-year-old student at Little Rock Episcopal Collegiate School.

"Everything is really fun," says Snyder, a fan of vintage animation who plans to intern for Disney when she is in college. "I just like learning all the stuff about [filmmaking]. I have big hopes that it will be good."

The program was designed so the girls didn't do the same jobs on each set. While filming Ensemble the day before, Snyder was the script supervisor, and Ensemble's director was a makeup artist on Justitia.

"They've been getting opportunities to learn different roles like key grip, cinematographer, director, actor and writing," says Rachel Norris, director of events for the cinema society. "They've been involved in all the different pieces, and each one works with a specific mentor during the two shooting days."

A coed crew might have made that more difficult, Tucker says, with boys leaning toward jobs like grip — maintaining and making equipment that supports cameras — and girls gravitating to hair and makeup artist jobs or producing.

"I'm trying to encourage girls to consider all the possibilities in a non-gendered situation," Tucker says.

"We did a lot of moving of lights and equipment, whatever the director needed, we would do it," she said of her Ensemble work. For Justitia — the title is a reference to Lady Justice — she was being mentored by freelance sound engineer Danny Hampton.

The two movies came from ideas pitched by and then voted on by the girls.

Justitia, about a female scientist whose male counterpart takes credit for work she did, is from a story by 17-year-old Trinity Lisk, who attends North Little Rock High School.

"It's kind of like a 9 to 5 situation, if you know that movie," says Lisk, referring to the 1980 film starring Jane Fonda, Lily Tomlin and Dolly Parton.

Lisk, who co-directed Justitia with Sophia Mammarelli of Mount St. Mary, said she also wanted an ending with a little ambiguity.

"It's not like completely a win. To me, if I want to make the audience feel something, I want them to see the characters have a loss. It's not a total loss, so there is still some closure. I'm really into trying to make a story that's not a cliche."

"I'm really into jazz, and I'm in band, but I noticed a lack of women in jazz," she says of the inspiration behind Ensemble. "It sort of has the same essence as Whiplash."

The movie also deals with the process of "blind" auditions, where a woman's appearance isn't part of the judging process.

"A lot of girls are trying to move toward blind auditions so [judges] wouldn't be biased," she says. 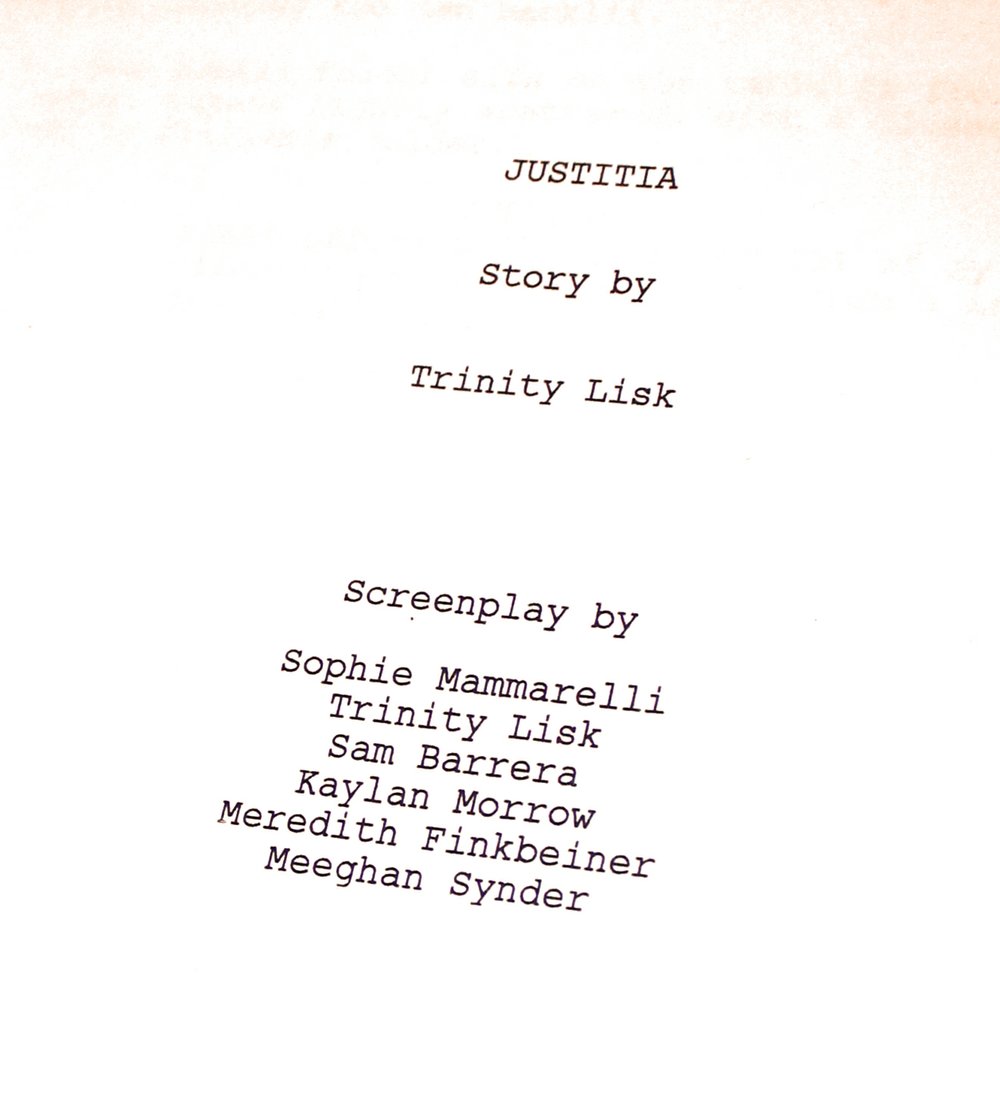 As with Justitia, the script was a collaborative process with other lab participants.

Hoerschelmann found her first time in the proverbial director's chair a bit of a surprise.

"I thought it would be a lot of responsibility. Really, it's not. It's mostly just creative decisions, and you get everyone else to do things for you. People were coming up to me, asking if I needed anything to eat, asking if it was too cold."

Hoerschelmann takes a film class at her school but says it's nothing like the lab.

"On the first day they were telling us all the things we'd be doing and we were in awe. We're really fortunate for the cinema society to be helping us out like this."

Lisk says she couldn't pass up the chance to work on a movie.

"I used to always want to be a screenwriter or a director, but in Arkansas we don't have that many opportunities. And you want to start young, so finding an opportunity that I'm not offered at school or anywhere else is amazing. I had to take part in it."

Arkansas has developed a talent pool for film and TV, Tucker says, and the girls in the lab now can be included.

"There is a thriving film community here. It's small, but it's thriving. That's part of our mission with the Arkansas Cinema Society, to give a venue and a voice to new filmmakers. That's why I want the girls' short films to be filmed at our festival, Filmland, so they will be in the same room with other Arkansas filmmakers. That's where it all begins."

As for another course next year, Tucker says: "We can only hope. If our generous sponsors renew their sponsorships for 2020, we would love to do another lab."